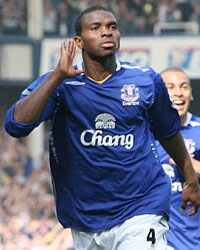 In the summer of 2002 Joseph Yobo became the first signing (albeit on loan) made by then new Everton manager, David Moyes, nearly 4 months into the Scotsman's reign in the Goodison hotseat.  Snatching the 21-year-old defender away from the clutches of Italian Champions, Juventus, and from the jealous gaze of Champions League contenders, Arsenal and Newcastle, demonstrated the depth and magnitude of this vitally important Moyes coup.

And it was nice to see the Everton manager capitalising on the spotlight thrown by the World Cup in Japan and Korea, where Yobo had shone in a somewhat lacklustre Nigerian squad that failed to win a game in the much-hyped "Group of Death".  Yobo had pretty much kept Michael Owen in his pocket during the game against England.

The deal that Moyes painstakingly forged appeared to signal a sea-change in the way modern transfers might be conducted. Working within a very strict budget and cautious not to spend too much on one foreign player with no guarantee that he would settle in England, Moyes initially bought his registration for the relatively modest sum of £1M, and the short time-frame of 12 months.  But it was long enough for David Moyes to ascertain that the young Nigerian was going to make the grade for him in the Premiership, and he tried to finalize the deal in December 2002.

Unfortunately, Yobo had a falling out with his agent, and it turned out that a severance payment from Marseille was in doubt.  Uncertainty over this definitely affected Yobo's play at times during the season, but he demonstrated enough for the Blues to know that he was a "keeper".

Everton had first option on securing his services for another four years, at a fixed additional fee of £4M.  If someone else came in for him, there was an agreed sell-on fee of £9M in his contract, no matter what, meaning that Everton would make £4M straight off.  Alternatively, he could return to Marseilles, with Everton collecting a Bosman-related fee as he would still have been under 24.

It was an acknowledged risk — but a potentially exciting one, as many Evertonians still fondly remember the last Super Eagle in a Blue shirt, Daniel Amokachi.

After further negotiations with Marseilles in May 2003, in which Everton got involved, all the fuss was resolved and Yobo finally signed a 4-year contract with Everton, a substantial fee being paid in return as David Moyes started to build his own team at Everton.

At 21, Yobo already had the composure to play anywhere in the back four and he was often deployed at right back in his early days at Goodison. It soon became abundantly clear, though, that central defence was to be his best position.

As Everton's 100th top-flight season developed and Yobo recovered from an early injury, he was to play an increasingly effective role alongside Stubbs. It became clear that he was the player Marco Materazzi could have been for Everton, if only the mad Italian had been able to tame his wild side.

Throughout the depressing 2003-04 season, Joseph showed himself to be a very classy and competent player and an excellent find by Moyes. He enjoyed a superb African Nations Cup in Mali and continued to mature alongside the likes of Celestine Babayaro.

Hopes that Yobo would be in it at Goodison for the long haul were shaken in September 2004 after a dubious article appeared claiming to be an interview with the defender, in which he said that his commitment to playing for Nigeria had precluded a move to a "big club", and that he would just play out his contract at Everton for another three years.

Yobo vigorously rubbished the interview, suggesting that it had been deliberately fabricated to unsettle him.  But he would later tellingly reveal his thinking at the time:  “When I came to Everton, we weren't a top half team but we started to win. Rooney was just coming through, he was the star of the team and they sold him [in August 2004] and I said, 'Are we building or are we selling players?'  So I was like 'What am I doing here if Rooney is gone? Maybe I need to go too.'”

“I actually spoke to the owners and spoke to the coach, I told them my mind. After you put out that report I was in the office till the next morning and I asked them why they are selling players.”

"At that moment we decided that I was going to extend my contract because they told me what the plan was and the reason why they sold him.” Yobo admitted that he had no choice but to ink a fresh 4-year contract on 15 September, so as to prove his loyalty to Everton. He went on to play a very significant role in Everton's 2004-05 campaign that lead to Champions League qualification.

As his Everton career has progressed, Yobo has only strengthened the impression that he is one of the best defenders in the Premier League and, after eventually breaking up the Alan Stubbs-David Weir partnership, he became the automatic choice in central defence.

Supremely athletic and incredibly agile, he is strong, quick, and composed. Attackers struggle to beat him off the ball, he never looks troubled in the air, and he looks equally comfortable slotting passes through to team-mates further up the field. He is as capable of a no-nonsense hoof into the stands as he is of moments of brilliance, whether it be an overhead kick under pressure or Cruyff-like inside his own box.

If there's a hint as to why he isn't regarded as one of a handful of the finest players in the top flight — apart from Everton's low profile in comparison with the "big four" — it's that Joseph is prone to the odd blunder that sometimes cost a goal.  A classic case in point came just 29 seconds into the second half of the inaugural 2005-06 league game against Manchester United, when under no pressure at all, he rolled the ball into Wayne Rooney's path to give away one of the most sickening goals ever seen at Goodison Park.

But hwe would go on to become one of the Blues' most consistent performers and, after he signed a new 4-year contract in July 2006 despite rumours if a move to Arsenal, he was paired with new signing Joleon Lescott. The two went on to strike up a superb central-defensive partnership that was intermittently broken up only by Lescott's abilities at left back. During the 2007-08 campaign, Yobo became the first African player to captain Everton when he led the team against Larissa in the Europa League.

As Lescott proved himself more and more as Everton's left-back, Yobo was partnered more frequently by Jagielka as the 2008-09 season progressed, and that too proved effective.  When Jagielka got injured, Yobo had to adapt to Lescott moving inside, with Baines finally getting regular games at left-back. After the 2009 FA Cup Final defeat, Joseph Yobo agreed to a 5-year contract extension.

But the 2009-10 season would change all that, with Lescott succumbing to the petrodollars of Manchester City, and the subsequent arrival of Sylvain Distin and Philippe Senderos (on loan), ultimately leaving Yobo on the bench after his African Nations Cup sojourn in January, unable to break back into the Everton defence. Rumours suggest that he declared himself unfit to play for an Everton game then jetted out the next day to play for Nigeria. This was disrespectful to the manager, club and fans — something that would end any meaningful relationship with David Moyes. His days at Everton would numbered after that... but it took forever to get rid.

Yobo was late back from his World Cup 2010 exploits in South Africa and did not play in any pre-season games before he completed a temoporay move to Turkish side Fenerbahçe on a season-long loan. The deal, which included the option to make the transfer permanent the following summer, went through ahead of the closure of the Turkish transfer window after then 29-year-old Nigerian captain agreed terms and passed a medical.

Later, he talked in veiled terms about issues at Everton regarding his ability to play for the national team, conceding to AllAfrica.com that his commitment to Nigeria probably cost him his Everton career. "During that period, I was under intense pressure. But now, I am very much relieved and I can now give my 100% to the game. It was not easy for me, but I thank God that all is over."

Yobo insisted that he would not compromise on his national team duties. "I have said it time and time again, my national assignment remains paramount to me whenever I'm going into any contract. We don't need to deceive ourselves, Nigeria still remains our country. This is where we will return after club assignments, so the interest of my country is well protected in my new club."

In March 2011, he was reported to be happy in Turkey, with the possibility that Fenerbahçe would look to make the move permanent.  Fenerbahçe offered Everton £2M to sign Yobo on a permanent basis, despite agreeing to a £5M clause when the defender first joined the Turkish side on a season's loan the previous summer.

Yobo scored the goal that clinched the league title for Fenerbahçe, his header in a 4-3 win over Sivasspor enabling the Istanbul club to pip Trabzonspor to the title on the head-to-head rule after they finished on equal points.

Turkey's champions wasted little time attempting to formalise Yobo's move but their opening offer fell way short of Everton's £5M valuation. However, the defender was determined to stay in Turkey, saying, "I do not want to return to Everton because I have seen the difference in playing in a competitive team on a regular basis and that has helped me to improve." Bill Kenwright seemed on board with this, saying the deal would be done within 48 hours (it wasn't) and stating to all concerned that he had received no other bids.

With no resolution reached, Everton reluctantly agreed to let the Turks keep Yobo for a second season-long loan, again on the assumption that they would adhere to the terms of the original loan arrangement and purchase him outright in the summer of 2012. Yobo helped Fenerbahçe to the domestic cup and repeat Champions League qualification but the Yellow Canaries would again renege on the £5M buy-out clause and trigger another ridiculously drawn-out saga.

Numerous reports during the 2012 close season claimed that the permanent transfer was close to being finalised and that Everton and Fenerbahçe had finally agreed a fee for the now 31-year-old Yobo but it wasn't until early August, almost 3 months after the end of the previous season, that any official word came from either club when the Blues confirmed that talks were at an advanced stage. He eventually sealed his permanent move to Turkey a couple of days later.

As Nigeria's most capped outfield player in history, Yobo played 55 times for the Super Eagles while he was on the books of Everton.

Yobo would return to teh premier League when he joined  Norwich in 2014. He was then recalled to the Nigeria squad. He made a total of 8 appearances but could not prevent Norwich being relegated to the Championship.

On 12 February 2020, he was appointed assistant coach of the Super Eagles to replace Imama Amapakabo.