No Phil Neville, who was out injured, so Mikel Arteta was named as Captain — a good move that should inspire him to take full command of this must-win fixture.  Fellaini back in midfield with Steven Pienaar starting his first game of the season. Saha and Yakubu up front.

A good early move saw Yakubu fire it over the bar after some great build-up play.  Pienaar was brought down in the edge of the box, but Arteta's delivery was woeful.  Since he's captain, no-none is going to deny him that role...  A great move by Fellaini fed Yakubu on the penalty who struggled under pressure to get his shot away, a foot wide! At the other end, a mis-kick by Jagielka almost let Duff in at the far post.

After a lovely passage of play down the left,  Nicky Butt slid in hard on Baines, Everton were awarded a penalty after 15 mins, and Arteta powered it home, sending Given the wrong way to put the Blues in the lead.

But a Howard mistake led to real chaos in the Everton goal area, and it needed a goal-line clearance with Everton very lucky to escape that was part of a difficult 15-min spell after the goal; as Newcastle responded well.  But some superb play, a great cross in from Baines and Marouane Fellaini rose to plant the ball firmly into the net.

With nothing left of a good first half, a poor ball from Yakubu allowed a cross to be whipped in and Geremi and Taylor was able to bundle the ball over the line to get Newcastle right back in the game.

As if that wasn't bad enough, the second half had hardly begun=n, and Newcastle were level.  Poor marking by Pienaar allowed Duff to benefit.

A dreadful second half followed, with Everton unable to make any sort of impression, Saha ultimately being replaced by Anichebe.

Fellaini was finally booked for his fourth or fifth infraction as Howard Webb lost patience with him.  Pienaar was hauled down by a professional foul from Geremi that earned him a booking.  As the match that looked so winnable in the first half continued to drift away from Everton, Ameobi got in behind the Blues defence  and N'Zogbia should have scored but Jagielka cleared off the line again.

A last gasp, with 5 mins left, Vaughan on for Pienaar.  A great shot from Anichebe bounced just an inch wide, bringing a huge gasp from the remaining fans who hadn't (unlike Bill Kenwright) left early.  As the tension mounted into stoppage time, a free-kick delivered in by Arteta was headed goalward by Yakubu but deflected, allowing Given to clutch it desperately on the line.

At the end there were a handful of boos from disgruntled Evertonians who continue to witness a crisis of confidence that appeared to have been mastered in the first half, only to be squandered but two more defensive lapses either side of the break.

So... we can't even beat Newcastle!

After a pretty disastrous eight days in football, Everton have the proverbial mountain to climb to rescue  what is left of the season.  Yes, a win today against a team languishing below us and in a far worse state, would not only let as match last season's equally lacklustre league record at least — it would turn things around in a significant way, for it's October already and Everton have yet to chalk up a single home win.

Goodison Park will probably be a little subdued today, and the size of the crowd itself will be the biggest barometer of fan feelings after the three successive and crucial defeats to Blackburn, Liverpool and Standard Liege that have dumped Everton out of two cups and seem the most spineless derby capitulation in living memory.

And still, David Moyes has not signed his new contract.  We've had Moyes telling us (a) the uncertainty is affecting the players and (b) the uncertainty is not affecting the players... so take your pick on that one!  But something has certainly been affecting David Moyes, who is so far removed from the bright fresh shinning light that dragged Everton out of the relegation mire all those years ago, it makes you want to cry. 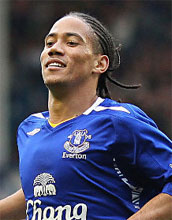 Steven Pienaar: Will he start today

Steven Pienaar is finally fit after recovering from a broken bone, and his return to the side cold herald a departure from the hideous hoofball that has seen a most unwelcome resurgence in recent weeks.  Pienaar is one of the few creative sparks in the squad, a player who can pass and move on the ground, but with Mikel Arteta still struggling to recover the form and influence Everton rely on so much, guile and forward thinking are always going to be at a premium, as the players demonstrated in Belgium last Thursday.

Some puzzles remain over the roles of Castillo (dropped for the crucial Uefa Cup game), Anichebe (now being played out of position on the wing) and Vaughan (an unused sub, not even on the list for games where his spirit and determination were much missed).  But David Moyes has pretty much a full compliment to choose from... with the glaring exception of one Tim Cahill, who starts his three-match suspension after getting sent off in last weekend's derby.

Oh, and Andy van der Meyde... how could I possibly forget him?