Comments (31) :
Thanks to Michael and the ToffeeWeb community for all your questions.

We?ve just finished editing the interview and it?s just gone live a few moments ago ? we thought you?d be keen to be some of the first guys to see it. I?ve attached a few pictures from the interview too.

The interview itself is here: http://www.lifesapitch.co.uk/?p=5561

As you?ll see we asked three of the fans questions at the end of the interview (over a game of darts!): whether there is a Gerrard/Lampard problem with Fellaini and Arteta ? who his all-time Evertonian hero was ? why do Everton always seem to start the season so poorly?

As well as these though, we?ve covered a lot of the other themes that ToffeeWebbers raised including:

Ø Why he?s playing so deep and whether he prefers a more attacking role?

Ø How he felt watching Spain lift the World Cup?

Ø What he believes Everton need to push on to a top-four challenge?

Ø How his injury has affected him?

Ø When he will return to Spain?

We hope that everyone finds it interesting. A few subjects were off limits for us, but we were still pleased with how candid he was. He was a nice guy too.

Hope you enjoy it. There?s also a competition to win some Arteta signed boots on the site if anyone?s interested. 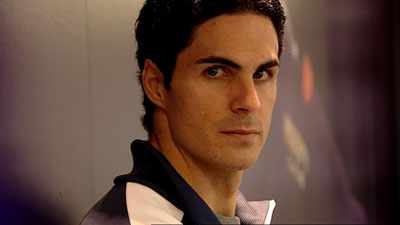 Nice one Ed, I think that too many people can complain about that. Mikel conducted himself pretty well, it is cler that he loves the club. And, it does seem that Moyes gets in to them at half time if things are not going right,
Garry Bennett
3   Posted 14/01/2011 at 07:44:47

Thanks Ed, so he wants to play further up the pitch, play him there and leave Felli to lie deeper.

He is still doing his excercises on his knee for an hour a day, even though he says he doesnt have to but he feels more comfortable if he does. Perhaps he isnt fully confident with it yet and has a bit of a mental thing with it?

What a bloke! God I hope he lashes in the winner on Sunday. Bring it on!

Did anyone notice Arteta's slightly awkward responses to the ToffeeWeb questions? Maybe he's aware of the site. Sorry to be critical but those weren't the most insightful questions from the list. Steve Round is destined to remain a mystery unlike the new Puma range.

"Steve Round is destined to remain a mystery unlike the new Puma range."

Why is he a mystery?

I just hope Arteta doesnt read toffeeweb after after some of the comments about him. I bet those same people wouldnt have the guts to say it to his face. It will only be a matter of time before he starts to dominate games like he used to.

Mike Green.
Hibbo will come off the bench and score the winner by ramming it into the middle of goal right infront of the spewy kop.
Cue mayhem.
Good lad that Arteta.

He basically says with Tim away we have been playing 4-4-2 or we have been playing this way recently. He doesn't say that we have played this system all season. Hardly in-depth but you can tell he is a class apart from most footballer's.
Jon Cox
19   Posted 14/01/2011 at 20:05:30

Stephen, so he's saying, since Tims been away, or Moyes has in any case decided to play 4-4-2, that Moyes has completely fecked up from the start of the season until now?

Thanks Brian, I missed that bit as I was fast forwarding through the filler.

He genuinely seems a humble and charming man which is a refreshing change from the majority of dim-witted, spoilt buffoons he comes up against each week.
David Thomas
22   Posted 14/01/2011 at 20:52:45

"Because his impact is unnoticeable."

What did you notice about Alan Irvine's impact??? Does that mean Mike Phelan is a great assistant manager because his team are at the top?
Christopher McCullough
23   Posted 14/01/2011 at 21:50:21

Three question marks. Does that mean you want three answers?

1. I didn't mention Irvine. Is he relevant? Our questions were about Round.

2. Yes, I think Irvine was competent. Based on the impact he and Moyes impressed on the club.

I enjoyed that interview, well worth the effort and we did get some insights that we otherwise would not have got.

I would have Mikel in my 5-a-side any day, but he would never get in my darts team.

I hope any of you who have been so scathing about this man this season are fucking embarrassed. Did you ever hear the term "form is temporary..." complete the rest FFS!

I have to say that I was pleasantly surprised at the quality of that interview. To my mind it struck a nice balance between being respectful of the interviewee and asking pertinent questions.

I was also generally impressed with the site as a whole but ? if anybody from Life?s a Pitch is reading ? it could really do with an RSS feed so that we know when potentially interesting articles are added.

Fairly good interview, and refreshing material rather than the usual boring mandated crap you hear out of most footballers these days.
Mikel will get his form back, and you can tell from the way he talks about it, that he won't settle for just going through the motions. Or I sincerely hope that is the case. Well done Ed.
David Thomas
28   Posted 15/01/2011 at 15:30:05

I just don't understand your argument about Round. I have no idea whether he is the best Assistant Manager in the world or the worst and i don't really understand how you or any fan would know?

I raised the name Irvine because he was the last assistant we had before Round. My point is I assume you are suggesting that because we have not done well this season that Round is not good at his job?

Or for example what do you think of Steve Clarke as an assistant? I mean he won the league whilst with Chelsea but nearly got relegated whilst at West Ham.

David, with respect, you seem to be sniffing around my comments like the metaphorical dog to a ballbag.

My primary argument is with the absence of a question in the interview. It's a question many of us want asked.

In my opinion, Irvine had a good impact on the club. I've been following Everton for many years, intensly, on a quotidian basis. I have a feel for the club.

Steve Round is a defensive minded coach with a miserable record. Everon have been way too defensive in recent years. The quality of the attacking players hhas not been reflected in their play.

Well seeing as though Arteta did not answer the question for you i will do so on his behalf.

You want to know what Steve Round is doing at the club. Well the answer is he is assisting David Moyes with the managing of the football club.

Thanks, David. And don't misquote me again, please.