A Tale of Two Secretaries

Recent articles by this contributor

When the draw for the Second Round of the 1882-83 Lancashire FA knockout gave Everton an away tie at Turton, the Everton club secretary, John W Clarke, quickly consulted his Bradshaw’s Railway Guide before making his way down to the local offices of the Lancashire & Yorkshire Railway Company on Tithebarn Street in Liverpool. Once there, he made the travel arrangements for himself and his players to compete in this important cup tie.

So it was that, on Saturday, 13 December 1882, the intrepid members of Everton Football Club boarded the express train which, after making one stop at Wigan, deposited them safely at Trinity Street Station in Bolton. The journey time was 45 minutes. Here they changed trains and, following a 15-minute journey, they reached their intended destination. They were greeted on the station platform and then escorted down a steep cobbled lane, to the headquarters of Turton FC at the Chetham Arms. 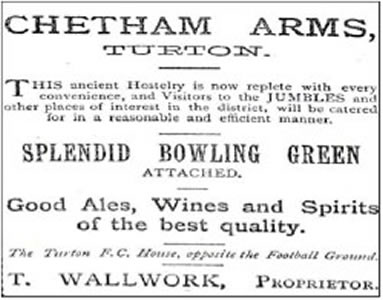 Their hosts were the oldest football club in Lancashire who, along with Darwen, had founded the Lancashire FA in 1878. The rules of association football had been brought to the area from Harrow Public School, by the sons of the wealthy Kaye family who lived in the local manor house. The roots of the game were then planted amongst the young men who worked in the several cotton mills and bleach works, set along the banks of Bradshaw Brook, in this small community, population 5.653, who lived high on the moorlands of Lancashire.

John W Clarke, upon his arrival, would have no doubt acquainted himself with his resident counterpart, John James Bentley, the 22-year-old son of the local shopkeeper, who now worked as an accountant in Bolton. He was the Secretary/Treasurer of his local football club and, as club captain, was one of their best players.

The two sides changed in the upstairs rooms of the Chetham Arms before descending the back staircase to rattle their way across the cobbles to the enclosed ground at the top of Tower Street. The Everton players would have, no doubt, been surprised the see the indigenous population queuing to pay for the privilege of watching them play, because there is no record of this having been done before. The game was popular in this remote corner of Lancashire, where association football was the main source of entertainment for the mill workers who could now spend Saturday afternoon at their leisure.

The visitors lined up in 2-2-6 formation in front of George Bargery, who was the Everton goalkeeper. Tom Evans and Tom Marriott played at full-back while the half-back positions were occupied by Tom Morris and Bill Parry. Provan and Williams formed a right-wing partnership while Gibson and Richards did likewise on the left. The centre partnership was formed by Frank Brettell and skipper Jack McGill who began the game on behalf of Everton.

The visitors, in the match that followed, gave a good account of themselves but were, eventually beaten by their much more experienced opponents. Turton went ahead after 10 minutes with a goal from Hamer and then increased their lead with a second goal that was scrimmaged through by their forwards. The home side were playing much more of a passing game than that of their visitors and it was one such move, began by John Bentley that culminated in a third goal, scored by Halliwell.

The play then changed direction. Everton, during the second half, had a lot more of the game and pulled back a goal in the later stages of the tie. They then exited the tournament on a 3-1 defeat. Darkness had begun to engulf the Turton enclosure when Everton scored their  goal so the name of the man who got the final touch was not recorded and remains, to this day, missing from the official club records.

The players, after the game, would have mixed well together in the shelter of the Chetham Arms, where the demands of hospitality would have been honourably executed while many a foaming glass, to the honour of their hosts, would have been raised high by the Everton players. William Clarke and John Bentley would have then executed their secretarial duties before the Everton players were escorted back to the railway station to begin the first leg of their journey back home to Liverpool.

John Bentley, when returning to the Turton headquarters, would have sent the result of the game, by telegraph, to the Secretary of the Lancashire FA. He also would have informed him of the sum of money, which amounted to three shillings and nine pence, that had been taken at gate. The secretary then entered these two items in the Minute Book and, in doing so, thus recorded the first gate receipts, to be taken at a  match, which involved Everton Football Club. They may be seen to-day at the headquarters of the Lancashire FA at Leyland near Preston. 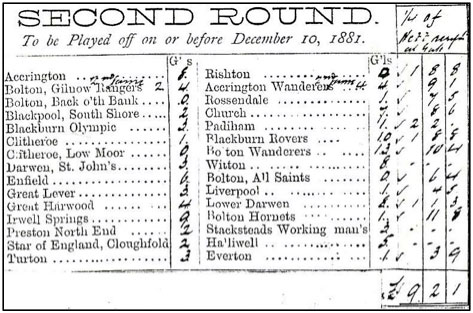 This was to be the only football-related meeting between William J Clarke and John Bentley as both men then went their own ways in life.  J J Bentley, however, would become the most famous. In 1885, he became the manager of Bolton Wanderers, for one season, and returned to manage them again between the years of 1887 to 1895.  He later became co-editor of the Manchester-based sports journal, The Athletic News and was a free-lance journalist with several national newspapers. In 1888, he collaborated with William McGregor in bringing together the leading clubs from the North West and Midland regions of England to form the Football League and, eventually, to became its president in 1894.

In 1899, he returned to manage Turton FC before leaving them to become the secretary of Manchester United in 1912. He remained at Old Trafford, in one capacity or another, until ill health forced his retirement in 1916. He spent the final years of his life with his wife and three children in the Chapeltown area of Turton until his death in 1918; he was buried in the local churchyard.  Turton FC folded during World War One but reformed again and still play today in the neighbouring village of Edgeworth. The old Turton ground, on Tower Street, was later taken over by the Old Boltonian’s Football Club and remains today — in all probability, the oldest football ground in England.

William J Clarke was born in 1855 in the Leicestershire town of Melton Mowbray where his father was a local publican. The family later moved to the Basford area of Nottinghamshire. The 1871 census tells us that William, now 17, was working, as an Assistant Master, at 13 St Paul Street in the Lincolnshire town of Stamford. It is a boys' boarding school that was run by Mr David Bloodworth, along with his wife, Sarah. William J Clark is first recorded as playing for Everton during the 1880-81 football season while he was living along with parents at The Queens Arms public house at 22 Village Street in Liverpool. He also held the office of Club Treasurer. The following season, with his playing days coming to an end, William J Clarke took over the role of club Secretary from Mr W Lowe, and held this position for one year before handing over to Frank Brettell.

The 1891 census reveals that William had married Mary Ellen Bradshaw and was living at 35 Corholme Road in the City of Lincoln. The head of the household was his widowed mother-in-law, Sarah, who listed her occupation as that of a General Dealer. William was employed as a General Dealer's Assistant. His wife has been born in the Laisterdyke area of Bradford while her mother hailed from Colne in Lancashire. William and Mary Ellen had one daughter, whose name was Margaret, and she was born in Lincoln.

The 1901 census revealed that these circumstances had not changed. William J Clarke, a former secretary of Everton Football Club, lived at the same address, and, worked at the same occupation, until his death on 15 December 1908. He was 53 years old.

If their colours clashed, did we have an away strip and, if so, what was it? Would Everton have known their opponents' colours considering that football was in it's relative infancy?

Barry Rathbone
509 Posted 31/12/2013 at 12:29:55
I bet Turton were right dirty so and so's - certainly sound like it - grim cotton workers hiding in the jigger by the station threatening our boys with large black puddings and stale eccles cakes.

Seb Niemand
582 Posted 31/12/2013 at 14:41:50
Fascinating article. In non-Everton related news. it was bad round for both clubs in the proud footballing town of Clitheroe. That said, I bet that the big Clitheroe derby was a real barn burner back in the day!
Danny Kewley
718 Posted 31/12/2013 at 18:40:21
Very nice journey on the old time machine there Tony! I noticed on the full round results sheet Great Lever beat Liverpool also 3-1. Considering our rivals were not yet founded (1892) who were they?
Happy new year to all Evertonians-----Lets hope its a good one!
Tony Onslow
735 Posted 31/12/2013 at 19:59:27
Dave M. Everton had, at the start of the season, dyed their previously assorted set of jerseys black and, to kill the drabness, added a red sash the ran at 45 % across the body. With regards to Turton, well they played in same colours as the present day Bolton Wanderers. It was considered polite, in Victorian society, for the home team, should their colours clash with those of their guests, to change in to their 2nd strip.

Danny K The Liverpool Association, who played Great Lever, were formed by a visionary local solicitor named Edwin Barry. He later played for Everton but decided to remain at Anfield when we moved to Goodison.

Wikipedia advises, "Hallam still play on their original ground, Sandygate Road, which is officially recognised by the Guinness Book of Records as "The Oldest Ground in the World". Sandygate is in Crosspool in western Sheffield. In 1860 Hallam first played Sheffield in a local derby which is still contested today. This 'Rules derby' is considered the oldest still-contested derby of any football code in the world, and is probably one of the oldest organised team-sport derbies in the world, besides those found in cricket".

Dave. Lancashire Cup, still in existence, is at present held by Man Utd.