The Man Who Coached Everton to Their First League Championship 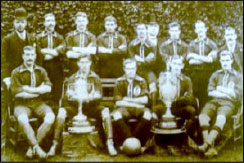 It is the summer of 1891 and the players of Everton Football Club proudly pose with Football League championship trophy which they recently won for the first time. The club executives, who were in charge of team selection, must take much of the credit for this triumph because of their clever dealings in the transfer market. The extra players they had brought in had proved to be good enough to carry of the championship after finishing second in the previous season. Their fitness and welfare however, they had placed in the hands of a former Everton player who, in the absence of a club manager, was virtually in charge of operations outside of the boardroom. His name was David Waugh and he stands, in mufti, in the top right hand corner of this picture.

Waugh was born the son of factory worker in the Stirlingshire town of Larbert in the year of 1861 before the family moved to Glasgow some time later. The 1881 census found the Waugh family living at 115 Stirling Road in the St Rollox area of the City where David was working as a Wheelwright in a factory that built railway locomotives. It is around this time that he first appeared playing football for a club known simply as “Northern” who played their matches in the shadow of the railway works on Hyde Park. In the summer of 1884 Waugh was persuaded to move south and sign for the Bolton-based side, Great Lever, and made his debut for them against a Derbyshire X1 on the 13th of September. Also in the Great Lever side was fellow Scotsman, Pat Gallocher.

Gallocher had formerly played for Johnstone Rovers where he had been a team mate of Jim McDonnell who, at this moment in time, was playing his football with Padiham. The local mill owners, who were interested in association football, had placed an advert in a Scottish newspaper asking experienced football players to come to Padiham and McDonnell had successfully applied. He then took the licence of a local public house that was to be used as the headquarters of the Padiham Football Club who would play their home matches at the local cricket enclosure. Waugh and Gallocher, after playing here for Great Lever, decided to leave the Bolton club and join McDonnell at Padiham.

Dave Waugh made his debut for Padiham on 29 March 1884 against a side from Bolton who played under the name of Halliwell. Two weeks later he took part in a match on Turf Moor against a Burnley side who had recently switched from playing under Rugby rules to those of the Football Association. The game was watched by a large crowd whose numbers, it would appear, surprised the local journalist…

The number of spectators who flocked to the ground was such as one as yet not seen in Burnley before at a football match. The grandstand was filled one hour before play commenced and the enclosure was crowded all the way round. It is reported, on reliable authority, that they were no less than 11,000 people on the ground. (Lancashire Daily Post, 5 April 1884.)

The visitors, with four imported Scots players, won the game by 4 goals to 2.

During the New Year celebrations David Waugh returned to Glasgow and married Janet McCallum before returning to Lancashire where a home was, eventually, found for the couple at Mill Street in Padiham. He continued to play for the local club until the summer of 1886 when, along with McDonnell and Gallocher, he signed for Burnley.

This transaction considerably increased the strength of the Turf Moor outfit as Everton were to discover when they made their first visit to the location. A local journalist recorded their arrival…

The crack Liverpool club journeyed over to Burnley on Saturday but arrived somewhat after the advertised time, giving the home team plenty of time for practice and causing some amount of misgiving on the part of the crowd that had gathered in front of The Wellington. The Everton centre started the leather against the incline. Mid Week Gazette, 2 February 1887.

(Those familiar with the present-day Turf Moor football ground may notice that this match was played on the local cricket ground which stands at the beginning of Brunshaw Road and not at the present day home ground of the Lancashire club. Burnley football Club, when they were formed in 1882, shared the area of Turf Moor, the one close to the town centre, with the local cricketers before enclosing the eastern section of the location to suit their own purpose.)

The local newspaper reveals that David Waugh is one of several Scotsmen now included in the Burnley line up along with Derbyshire born Frank Sugg. They proved too strong for the visitors from the Mersey Seaport and beat them 5-0. Waugh was again present in the Burnley side when the return game took place at Anfield on 11 April 1887 and scored as they again beat Everton 3-0.

David Waugh in his Burnley days

The form of David Waugh had now atracted the attention of the Lancashire FA selectors an the following season they chose him to represent the Red Rose County in a fixture against Dunbartonshire. The match, played on 22 October 1887, took place before a crowd of 5,000 at Anfield. Waugh lined up on the left wing alongside home favourite George Famer while Alex Latta and Rob Kelso, who would later sign for Everton, featured in the visiting team. Latta scored one the goals as Lancashire, who was reduced to 10 men, lost the game 4-1. The Scotsman then returned to Liverpool in March 1888.

Both Burnley and Everton had been selected to become founder members of the new Football League when the two sides next met at Anfield. The home side, after a close contest, won the game 2-1. The new Burnley enclosure was still under development so the return game, played on 21 April 1888, also took place at Anfield. Waugh again featured in a visiting side that was beaten by 3 goals to 0. Next season he signed for Everton and took up residence in Liverpool.

Waugh made his Everton debut in a pre-season friendly that was played, rather ironically, against his former club, Padiham. He played in another two “warm up” matches, against Halliwell and Blackburn Olympic, before being selected to represent Everton in their inaugural Football League match at Anfield. The match attracted a crowd of 12,000 spectators who watched Everton beat Accrington by two goals. Waugh then played in the next four Football League games and scored his first goal, in a 2-0 win against Aston Villa at Anfield. However, he was badly injured in the later stages of the game and was forced to leave the field. He was out of the game for several months before returning against West Bromwich Albion for what was to be the next to last football league game of the season. Waugh then took part in final game of the season, against Blackburn Rovers, and scored his second and final goal for Everton before retiring from competitive football. Nevertheless, his association with the club was far from over.

The Everton executives, clearly unhappy with the performance of their team, then signed several new players from north of the Border and appointed David Waugh to the position of club trainer. He quickly got the new players organised and began the Football League campaign with a 3-2 home win at the expense of Blackburn Rovers. The overall performance of the Everton team during the course of the season improved considerably but they were just beaten to the championship by Preston North End. Waugh again took over the role of club trainer and, as we now know, coached them to the championship at their third attempt. His name then vanished out of the local newspapers of Liverpool.

The 1891 census revealed that David Waugh, who listed his occupation as that of a Wheelwright, was living with his wife at 9 Hawksworth Street in Liverpool. Their eldest child Isabella, aged six, was born in Glasgow while Robert, aged four, was born in Padiham. Their youngest child was 6 months old. Her name was Jessie and she was born in Liverpool.

The 1901 census tells us that Waugh family had returned to Glasgow and taken up residence at 160 Cowcaddens Street. They were to spend the rest of their days in the city and have several more children. David Waugh, the man who coached Everton to the Football League championship died in 1937 while living in the Springburn area of Glasgow.

Absolute brilliant info on our history.


DonÂ’t know where you get this stuff from but itÂ’s great reading and informative.

Memories are made of this.