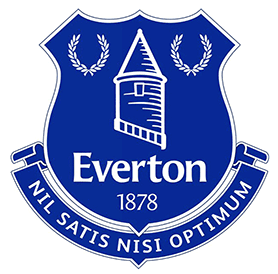 The new crest selected by the fans
Everton have begun using their new crest, which was voted for by supporters from a selection of three 'finalists' promoted by a backlash over the badge the club used last season.

For the first time in the Club's history the crest has been selected by Evertonians and it will begin appearing around the stadium this week as the Club makes the official switch.

The crest was following supporter consultation in October 2013, and it received an overwhelming 78 per cent of the online fan vote.

The new crest strongly reflects the Club's heritage and status as an authentic, respected football club.

It brings together the key icons of the Club's tradition - the Tower, Nil Satis Nisi Optimum and the Shield, rendered in the strongly preferred Club colours of royal blue and white.

Better than the foregoing abomination, though, that's for sure!

It felt like a new era last season, under Roberto. Now, we're going back to Umbro and this abomination. Two steps back me thinks.

Steve Jones
6 Posted 04/07/2014 at 21:45:19
The proportions are all wrong, it looks cluttered and forced. They should have just gone back to the badge we had prior to last season once they'd admitted it was a mistake.
Lewis Barclay
7 Posted 04/07/2014 at 21:53:55
Hate it.
Paul Smith
8 Posted 04/07/2014 at 22:00:02
It could do with a bit of yellow on it!
Jamie Yates
9 Posted 04/07/2014 at 22:00:19
Agree completely, Steve Jones. The 'Everton 1878' has just been shoehorned in under the tower. I went to art school and several of my close friends have managed to carve out good careers in graphic design, asked a few of them (none of them Evertonians) to have a look when the vote went up and the reaction was along the lines of all of the offerings being distinctly GCSE standard. Change for the sake of change.

If the problem was with reproduction across the EFC product range, online, etc, they could have sharpened the original design and font without any need for moving bits of it about. Really looks worse every time I look at it. At least if the point was to change the thing then last season's effort actually did that, like it or not.

I have said for ages now that too much has been made of the badge and so far the whole thing has been a sideshow this past few months whilst the transfer business has as per usual taken a back step.

What's more important really, Blues? Are we going to start the new season with Osman on the left and Naismith the lead striker??

Michael Kenrick
13 Posted 04/07/2014 at 22:47:02
I think it might be a bit of a stretch, Jim, to claim that redesigning the badge has interfered in any meaningful way with our pursuit of transfers in. Especially as it was all decided months ago. Can we have a bit of patience... and some sanity to these posts, please?
Dennis Ng
14 Posted 04/07/2014 at 23:14:10
Tidy looking crest! To be fair, were we expecting much transfers this year? Especially with RM in Brazil? Id love him to sign James Rodriguez while hes there but thats even unlikelier than a dream. I am unhappy that Barry has not signed on though.
Peter Warren
15 Posted 04/07/2014 at 23:47:39
Hindsight - what a fantastic thing.

Last year Roberto (also many years before that) my no1 choice as manager.

Petition - I've only ever signed or voted for two. First one was to move to Kirkby - what a bad vote.

Second was to get rid of badge. How shit was it - I was outraged... It was unbelievably bad. But almost from the start of the seaso I actually started to like it... By the em I defo liked it. Oh and the new badge thought it was pretty rubbish from the start and now it just outlandishly terrible.

78% ( and more) have messed up  old badge far better. I wonder what percentage will admit their mistake.

Daniel Flosi
16 Posted 04/07/2014 at 23:49:18
NBC sports was using the 'old' one throughout last year which I thought was pretty funny since all the trouble the club went through. So we'll probably see last year's crest all over out here.

Anyway I do like it, its not perfect or so terribly different but it looks good and I always thought the yellow looked generic and dated. It looked too yellow. If that makes sense.

Duncan McDine
17 Posted 05/07/2014 at 05:57:07
I'm glad I'm not the only one that thinks this badge looks GCSE standard.... When the 3 new options came out, I found myself much more in favour of the 2012-13 badge. Had they just wiped out the yellow, that would have done for me. Now we have a 'kids drawing' version of the good old badge!... And it's all our fault.
Liam Reilly
18 Posted 05/07/2014 at 09:45:33
I was with work last night; many positive comments on the football the team played last year from Redshite, Man Utd and Chelsea supporters. Then one of the Redshite guys mentions 'the Badge' controversy. Q; laughter all around.

Couldn't care less if its Yellow, Orange or RED; for me it's all about the football.

Then it becomes the single best piece of design I've ever seen.

As for the criticism 'too cluttered', that's what they said about Canaletto (...probably).

Kevin Jones
21 Posted 05/07/2014 at 10:59:30
Don't want to go all Jordan Maxwell here, but we haven't selected anything, we've elected the best of a bad bunch. The powers that be at the Club have conned most people into thinking this is our doing. All we've actually done is pick the one that they wanted us to pick. There was at least 20 better design's than this one floating round, but we never got to "vote" for them.

I don't see yellow as one of our heritage colours, it's just a change colour that became tradition.

Black is, however, a heritage colour, and although it wouldn't be useful in this badge, I am certainly glad that it's re-implemented into the kit.

The 2000-2013 badge, though well-designed, had light blue in the gradient, which is not our colour  Royal blue is... and our new badge is exactly that.

Like our blue being Royal Blue, our 'yellow' is actually (or should be) amber.

A few too many chopped nuts on the Classico admittedly....

Last years wasn't as bad as everyone was making out. It looked a lot smarter in a single colour.

Richard Reeves
28 Posted 05/07/2014 at 19:12:01
It's only bad when you compare it to the proper badge but I agree with what Eugene Ruane was saying  when you compare it to last year's it's almost a piece of art. Hopefully one day we'll be so recognised that the club will be able to go back to the 90s badge but at the moment i'm glad the new one is still quite traditional-looking, even if it is a bit stretched and congested.
Joseph Bell
29 Posted 05/07/2014 at 21:33:25
Rubbish! This was our chance to create a modern identity. Instead we have the old badge made even worse by cramming things onto it.
Barry Roberts
31 Posted 05/07/2014 at 23:08:17
Seriously, is the new crest so important? Give me a team that can win something on the pitch. The whinging on here makes it seem like the badge is our major problem. All that this achieves is to distract us from our lack of transfer activity.

I support the team, not the badge, so give me a team that I can be proud of. Would it matter if Roberto won something this year but the badge was crap?

Chris Leyland
32 Posted 06/07/2014 at 00:42:40
Erm, it is a slow news day? I bought a mug from Everton One on 13th May with the 'new' crest on it.
Dennis Stevens
33 Posted 06/07/2014 at 02:12:07
The original club badge was perfectly fine until they cluttered it up unnecessarily. Then after the Toys 'R' Us style abomination last year we had the phoney vote where the least worst option was selected &, lo & behold: it's just another over-cluttered variation on the original design. What a waste of time!

The sad thing is that the fiasco of the awful badge we had last year inspired many Evertonians to come up with some great designs that could have offered us a real choice of something different, if they really felt it was necessary to change the badge at all. Based on how little the design has changed from the one we were using the season before last, I really can't see what the point of the exercise was.

You can only deal with one issue at a time?

The badge is one subject, transfer activity (or lack of it) is another and you can have views and post on BOTH.

As for getting distracted about our lack of transfer activity, what EXACTLY are we supposed to do?

Do you think Everton havent signed players because TWers took their eye off the ball re the badge?

"Come on, we need to forget the badge and concentrate on a much more important issue... one that we have absolutely no fucking say in whatsoever and cant influence in any way, shape or form"

You add "I support the team, not the badge."

Again, ludicrously simplistic nonsense, its Everton Football Club and like every club, a lot of different individual elements go into making up the whole thing.

Or maybe youd be happy to see us play bollocko?

Yes, there were better options, but we were consulted in some way at least. The "funny" thing is that, after several years of flat design, gradients (colour fades from one tone to another) are seemingly back in...

The club will unlikely make any changes to the badge over the next few years because of the (rightful in my opinion) backlash. So we'll be stuck with the fact "ticks all boxes" Milton Keyes version for a while.

Nick Armitage
39 Posted 06/07/2014 at 22:38:58
Dreadful, insipid kneejerk reaction. The idea with the last crest was to move into the future, this is a step back to the past.
Joseph Bell
40 Posted 06/07/2014 at 21:05:29
Barry #31 Your comment is like an Alex Nyarko performance. Eugene #36 Your comment is like a Barry Horne volley. Everything about Everton matters to some of us: badges, length of grass, colour of nets, size of pitch, style of play, kit, beer served, the bird shit on our seats every home game etc.

Of course the performance on the pitch and the success of Everton is the most important thing. However, that does not mean everything else pales into insignificance. This is a FORUM and we post things that matter to us however trivial they are. We whinge because we care.

Steve Barnes
41 Posted 10/07/2014 at 09:05:44
This badge is the best of the ones on offer to us. I was disappointed that we missed an opportunity to go for a design that was more 'designed' that built from components already in existence.

Much better than last year's 'Fat Rascal' but could have been better still.