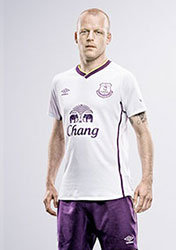 Everton have unveiled the team's third kit for the new season, a white, blackberry and yellow number that will make its debut in the friendly against SC Paderborn this coming weekend.

The new strip completes the club's trio of strips for 2014-15 after the launch of the Umbro-designed home kit last month and the imminent release of the all-black away kit that goes on sale later this month.

Forward Steven Naismith said of the new design on the official website: "It's a really smart, stylish kit and will really stand out on the pitch. I like that it's so different to the home and away strips.

"I know the third kit is popular in the dressing room so hopefully the fans will like it too."

The third kit will be available for pre-order on 18 August and goes on sale on 18 September.

Even the mention of Blackberry in a football kit is disturbing.

...and, guys, please do not come back at me with comments about tarts or pooftahs, please :)

Why this need for a third kit that will rarely be used. We only ever had a home and away kit and it was enough in times gone by. So much for UmbroÂ’s nod to the past Â– where did they find this color, what is Everton about it?

The new home kit is ok; white shirts, black shorts and socks for the 2nd strip would suffice surely. Just another way to get money out of the fans I think

IÂ’m glad some people like it. I canÂ’t see it growing on me, let alone going on me.

Approximately one million miles better than the ultra-dismal second kit.

Blueberry, blackberry whatever berry - the thing is PURPLE!

Hope this won't be making too much of a showing this season - better than a tux anyway!

That octopus kit is genius...I would buy that one...

Sue Brown - what would you do if Everton brought this kit out? :)

It's alright. Not great, not shit. Just alright.

It makes a change from the usual illuminated bright yellow efforts that we seemed obsessed with for a long time.

For the first time in many years I'd have to say the three kits that have been brought out for a season really impress me, all three from the home, away and third are all very very smart and classy.

This for me is almost as nice as our wonderful third kit from 2010/11 that class cream coloured kit with the collar, the one we won the FA Cup penalty shoot-out at Chelsea in.

I loved that kit.

Apart from that though, absolutely rancid, on many levels.

Looks like it belongs in the Blue Square Premiership at best, the bin or the bonfire at worst.

Kev Johnson
43 Posted 07/08/2014 at 21:19:30
Well observed, Kristian, At last, a colour-literate comment! I was beginning to think I'd come to the wrong place for the chromotherapy evening class.

Having said that, as far as I'm concerned our pre-season kit launches have gone tolerably well. Now if only we could get the lads to remember how to play football...

Pat Finegan
44 Posted 07/08/2014 at 21:14:24
This is exactly what a third kit should be. You have your standard club colors for the home kit. You have a classy away kit of reasonable pattern and coloration. You can have fun with your third kit so long as it is within reason. This kit isn't exactly conservative. Some will love it, others will hate it. That's perfectly fine because we won't be wearing it that much. I happen to love it.

The kitÂ’s sound, light coloured and smart. We had a purple kit only a few years back, had white many many times, so itÂ’s just a continuation of that.

Si Cooper
50 Posted 08/08/2014 at 00:43:06
Perhaps some people are a little too set in their gender stereotypes? Purple is the colour of royalty / leadership, which historically has mainly been very powerful men. Not sure you can sweepingly characterize them as effeminate.

If opponent wears dark colour, away team will have to wear light.

It reminds of the 1987 "NEC" kit. That one will always have a special place in my heart.

Kin'ell - even that shitty badge with yellow in it from last year never got this many differing reactions!

I love the ToffeeWeb Political Party conferences to death - so many hymn sheets being sung from - had me thinking - maybe we should run the country?

Sam Morrison
63 Posted 08/08/2014 at 09:30:03
I feel that many people have been tarred with the same you-don't-like-it-because-you're-not-comfortable-with-your-sexuality brush.

Just to be clear, I don't like it because every time I look at that picture I think "white polyester".

And Nais looks like an alien is about to burst out of his stomach.

The one thing I hate about the city is all those disgusting purple bins all over the place. This reminds me of that. Absolutely awful.

The only thing to commemorate Everton winning the League in 1914-15 is the book by George Orr on Everton Footbaall Club Champions 1914-15 Â— 'Over the Top' available on ebay for ٦. It pays homage to every player who played that season and details match by match over the season.

Why can't the club tap into the fans passion? We have a wonderful, unique history; Everton should be the leading club in this field.

James Marshall
72 Posted 10/08/2014 at 23:26:30
Oh and one other thing - to all the people complaining about it, go have a look at the shambles the RS will have to trot out wearing in some of their games next season - that should cheer you right up!