Gibson out of Ireland qualifier 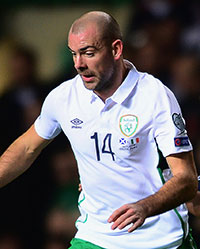 Darron Gibson has been forced to withdraw from the Republic of Ireland's Euro 2016 qualifier against Poland on Sunday because of injury.

The midfielder went down needing treatment after taking a knock at Queens Park Rangers at the weekend but was able to finish the match despite initial fears he had damaged his troublesome knee.

Gibson has been unable to train with the Irish squad this week because of a different issue, however, with reports suggesting he has a groin strain.

He was hoping to play for his country for the first time since the autumn when he was forced out of the qualifier against Scotland but will return to Finch Farm for further treatment with a view to being fit for the visit of Southampton in the Premier League on 4th April.

It seems his body just isn't up to the demands of the premier league.

Brian Porter
4 Posted 25/03/2015 at 17:03:39
Just when we thought he was injury free and starting to show his importance to the team, yet another injury problem. Let's all hope this is nothing serious and he can be fit in time for Southampton. Get well soon Darron.
Andy Mack
5 Posted 25/03/2015 at 17:04:35
Thats unexpected. Come on Gibbo man, surely another injury would call for some kind of contract nullification. 3 years and about 1 seasons worth of games. We need a crock clearout.
Tony J Williams
6 Posted 25/03/2015 at 17:17:05
Well that's a fecking big surprise........
Kevin Jones
7 Posted 25/03/2015 at 17:14:59
Andy. Gibbo gets injured playing football for Everton / Ireland. He doesn't fall out his loft, or walk into the back of a ladder, drop aftershave on his foot or, or even, and this takes the fecking biscuit, move a sign saying "do not play here" and the fall over said sign.
Imagine how frustrated HE must feel about these injuries. It's a crying shame because, as with Joey Parkinson before him, with a few injury free seasons he would be an absolute legend for Everton
John Audsley
8 Posted 25/03/2015 at 17:46:57
Kevin Jones.

Ben Howard
9 Posted 25/03/2015 at 17:53:10
It's such a strange one. He comes back from a long lay off and immediately shows his worth to the team. You'd expect some rustiness, but he seems to always hit the ground running. I obviously feel so sorry for the lad but we literally can't afford to carry him. If he didn't have a glass body he'd still be at Man United and pulling the strings for them, I'm sure.
Chris Williamson
10 Posted 25/03/2015 at 17:56:37
Very frustrating for the poor fella - and the fans. What did he cost us? Is he the six million dollar man?
Ben Howard
11 Posted 25/03/2015 at 17:58:34
Further to my comments above I also think there has to come a time when you commit fully to your club. Should he even be considering playing for Ireland? Sorry to any irish fans that might offend but I'd say the same thing if he was English .
Minik Hansen
12 Posted 25/03/2015 at 18:04:11
Ben Howard, aren't you busy on your I Forget Where We Were tour?? :)

Gibson and Oviedo I believe have made difference on those occasions they were involved in the games, they seem to be the once that brings desire real desire.

Let's hope Gibson have inspired enough to push his teammates forward, though he just might be back real soon?

(Is there any more petulant act than getting angry at a player who gets injured?)

Ian Brandes
15 Posted 25/03/2015 at 19:09:51
Rather he was fit for us than his country. He has been dogged by injuries sadly, and if this signals a long lay off, then perhaps the club should claim the insurance if it is finally a career ending injury.

The tragedy is that he is a great player for us when fit, but the latter is not that often.

What the hell, if his legs were good all along, he'd still be at ManU.

If he's healed in the next 2 weeks, would like him straight in. Even if it's to showcase him for potential buyers. What with Barry's 3-year contract and all.

Maybe Gibson is just being ultra cautious given his past injuries while playing for Ireland. I wouldn't be surprised if he is back within a couple of weeks.

With us he's never had the opportunity to create any real momentum. If that had have happened this season it would have been a huge plus. He's a class act!

You've got to have massive sympathy for him and maybe for us!

He is a cracking player... sadly made of glass.

Sadly, as far as I am concerned he probably wouldn't have been in the team for Southampton as Gareth Barry is likely to be back.

Gibson is a quality player. Seems to want to do the right thing, play the right way, and at his age does have at least 5-6 years left if he can stay fit and would be an asset to most teams.

Re playing for his country. He had a few years out not playing for Ireland. So assume he is making up for lost time.

We weren't conned. We knew what we were getting. The transfer fee probably reflected that

John Crook
30 Posted 26/03/2015 at 12:12:53
Surprise, surprise. See you in 15 months Darron!
Dave Roberts
31 Posted 26/03/2015 at 16:09:48
The manager needs to sit down with Gibbo and tell him he has to reduce the number of games he is expected to play and that otherwise his career will be over. He really does need to consider retiring from international football... after all, he will be playing for nobody at all if this continues.

On the other hand, this might not be all that serious. That was one hell of a knock against QPR and one that would be likely to put anybody out of the next game at least. It doesn't necessarily mean another protracted lay-off. Let's hope not anyway.

Harold Matthews
32 Posted 26/03/2015 at 23:30:08
Never the quickest but a quality footballer who reads the game and moves us forward. Probably has the best heading technique of all the midfield players and has certainly helped us change things round.

Unfortunately, unlike Stones, Lukaku and Besic, players like Kone, Barry and Gibson need regular training and competitive games to stay match-fit. Let's hope Gibbo's period of inactivity is a short one.

It's no real surprise that we have scored a few more goals since Gibson has returned rather than the mind-numbing previous four months watching Barry, Besic and McCarthy pass the ball negatively.

But if I was betting on who will start the next game: Him or Barry??