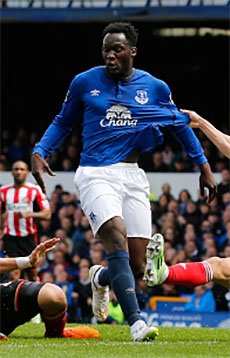 Everton lost at home for the first time in 2015 as Sunderland benefited from two fortunate goals and the inability of Roberto Martinez's side to take advantage of their overwhelming domination of the game.

Before today, the Black Cats hadn't won successive matches at Goodison Park in ninety-odd years and with the Blues in control from the outset and Dick Advocaat having set his stall out for a point, another victory for the visitors appeared an unlikely proposition.

With Romelu Lukaku lacking sharpness up front and Everton displaying their familiar inability to vreak down an entrenched defence, the contest had an air of inevitavbility about it when Danny Graham got in the way of a 25-yard effort from Jordi Gomez and sent a wicked deflection past Tim Howard early in the second half.

Despite having almost three quarters of the possession to that point, the Blues had failed to work Costel Pantilimon enough in the Sunderland goal, although the Romanian 'keeper earned his corn twice by coming out quickly to smother chances for Lukaku.

Earlier in the first period, the returning Leon Osman had curled a decent effort just wide of the far post and the veteran midfielder would be denied with perhaps the best chance of the half when the 'keeper stopped his goalbound shot on the line with his foot.

Everton's superiority in terms of possession was reflected in a mounting corner count and they almost made the breakthrough two minutes into the second half. Conor Wickham came within inches of heading Phil Jagielka's knock-on into his own goal before Pantilimon batted another header from the Blues' skipper behind from another Leighton Baines set piece.

Four minutes later, Lukaku was presented with a free header following yet another corner but the ball ended up in the Gwladys Street stand after coming disappointingly off his shoulder.

A rare foray forward by Sunderland saw Graham prod narrowly over from Sebastian Larsson's centre before the visitors scored in the 54th minute as Gareth Barry's glancing header fell to Gomez in acres of space and Howard was left helpless from the ensuing deflection.

Martinez responded quickly by introducing Kevin Mirallas for Barry and there was a noticeable uptick in Everton's urgency but they could not engineeer an equaliser. Seamus Coleman was unfortunate not to cap a piece of ball juggling off with a goal, his shot pinging a yard wide before both he and Mirallas saw shots blocked by the wall of red and white shirts protecting Sunderland's advantage.

The mounting pressure on Advocaat's back line appeared to have finally told when James McCarthy's low drive went through a forest of legs but it cannoned agonisingly off the foot of the post while the Irishman nearly fashioned a goal with impressive run three minutes later but he fired over the bar.

Five minutes from time it was game over. John Stones was caught dithering with the ball in his own half and when it was moved on to substitute Steven Fletcher, he was was allowed to work his way across the box where it broke to Adam Johnson. His shot hit Coleman and then Jermaine Defoe who was lurking in the six-yard box and rebounded into the net with Howard vainly appealing for offside.

There was a note of controversy about the goal — a few minutes earlier Defoe appeared to have clipped Coleman's heels at the other end as he set himself to convert a chance at the far post which, had it been given, would have handed a penalty to the Blues and a second yellow card to the striker. And in the build-up to the second goal, Fletcher seemed to foul Stones as he slipped in the Everton box but, again, referee Lee Probert allowed play to continue.

Though Sunderland had, by their manager's own tacit admission, come to Merseyside to earn a point in their bid to avoid relegation, they executed a text-book smash-and-grab raid thanks to Everton's continuing attacking impotence.

With Stoke comfortably beating Tottenham, it means that the best the Blues can probably hope for this season is a tenth-place finish, but they will need to find some inspiration and get back to winning ways in order to achieve it.