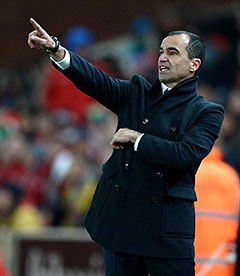 Roberto Martinez has said that Everton "would love it" if the club were awarded a place in the Europa League next season by way the Fair Play League, even if it means kicking off the campaign at the beginning of July.

The Blues are slightly behind West Ham in Uefa's table that ranks teams by a complicated formula affected by things like disciplinary record, attitude towards match officials, attacking intent and the two clubs meet each other at Upton Park this weekend in a Premier League fixture that could decide which team gets England's place.

Given the very early start date — the first qualifying round would more or less coincide with the players' return to pre-season training — and the potential for far-flung away trips, some have half-jokingly questioned whether the Blues and Hammers will kick lumps out of each other in a bid to avoid winning the place.

Martinez dealt with that question after Saturday's 2-0 defeat to Sunderland by insisting that the club would accept any place awarded and use it as an opportunity to blood some of the club's younger players.

ďI wouldn't be disappointed," the manager said. "I would love it, and to answer it clearly, if we get awarded a place, we will embrace it and enjoy it as a football club.

ďThe international players are away until June 17th, so they would not be available for the early rounds. But we have got a lot of young, talented players who have already played in Europe. They are ready for that experience.

ďThe first four games would be taken in that manner. Then it is part of the preparation for the pre-season work. There is a place in the football club to embrace it — it is a chance for the youngsters to accept the responsibility and see how far they can go in the early round. It doesn't happen every year."

I hope he does stay now cause he is very entertaining with his press sound bites. He is a walking talking Monty Python sketch.

Remember what was laughingly called our last pre-season we couldn√ā’t even beat Tranmere!!

ps: Or anyone else for that matter.

Oscar Huglin
11 Posted 12/05/2015 at 10:56:00
Now I want it to happen. Great experience for our youngsters. Well said, Roberto.
Tony Marsh
12 Posted 12/05/2015 at 11:34:44
That’s all we need √ā‚Äď the new season starting before this one has ended. The Europa is a curse and stats don’t lie. Why does the manager wants our ageing squad to play in more meaningless fixtures in a terrible competition we have zero chance of winning? It was only after we got knocked out of the Europa this season that our results picked up.

The whole thing is a farce. Players will want away rather than face a grueling, draining season playing in Sep Blatters numbskull joke of a competition.

Go abroad and go on the piss, lads, you don’t need a mickey mouse game to drag you there surely?

How does the Fair Play table look after the weekend? Is it a realistic "aim"?

Groundhog day is upon us. Please, please Barry and AN Other √ā‚Äďget sent off ASAP.

Where on god's green earth do you get the notion we will qualify for the CL?

Mind you, you did use the word "Eventually" which could mean any time scale from now too the next millenium.

EL football is a total waste of time and effort, we don√ā’t have the squad resources to compete on one front never mind four. EL, PL, FA Cup and League Cup, or whatever it√ā’s latest guise is.

The squad is ageing and we have few resources to strengthen with the quality needed to compete in the above. This, combined with a manager who hasn√ā’t got a Scooby will equate IMO to another phenomenally disastrous season on all fronts.

I couldn√ā’t/can√ā’t take another season of sticky grass soundbites.

You said "Than to finally" which means the same thing I suppose.

Scott Goin
23 Posted 12/05/2015 at 19:48:56
Dave, maybe I√ā’m too optimistic but we did come really close to the CL last season. The players are mostly the same and there√ā’s a chance Martinez is able to galvanize the club again. There√ā’s been several instances of a 2nd-year slump turning into a 3rd-year resurgence. Moyes did it himself after slumping badly in √ā’03-04 prior to the great run in √ā’04-05.

I don√ā’t think such a turnaround is probable but it√ā’s definitely possible. A great start to next season could have everyone believing again and working hard.

Realistically, we aren√ā’t going to get in Champions League any time soon but I firmly believe it√ā’s going to happen at some point within the next 5-10 years and it would be nice if we had a roster full of experienced European campaigners.

I sincerely hope you are right on all fronts, my friend.

Can√ā’t see it though, mate.

Full focus next season has to be getting off to a better start; the best chance we have of silverware is one of our domestic cups, so I for one really hope we do not qualify for the Europa League and focus instead on winning a more realistic domestic cup.

Because that one place was 7 points adrift of qualification so not really that close.

Eddie Dunn
27 Posted 13/05/2015 at 08:33:10
This is a marvellous opportunity. Everybody, stop being so negative. We must be squeaky-clean losing our last two games without so much as a whimper, and then we can qualify for the competition that realistically gives us our best chance of Champions League football the next season.

The extra games, and early start to our season is just what this bunch of players need. Most people only get a couple of weeks off anyway. After the last laughable pre-season, this is just what the doctor ordered.

Also, bollocks to playing the kids, put in the strongest side, and bring kids on once the game is secure. Play the youngsters in the domestic cups, this will reduce the timetable.

It will be a lovely, rhythmic Thursday - Sunday season coming up.
So remember, no silly tackles, no shirt-pulling, and no back-chat. Nolan, Noble, Tomkins & Collins will surely transgress.

Paul Ward
28 Posted 13/05/2015 at 14:10:54
Eddy, you are a glutton for punishment. Hasn√ā’t the inept trash we have seen this season proved that the Europa League is a mistake for this poor squad of players?

The only reason we are in with a shout is the lack of fight in this team has enabled so few bookings. If we get in, it will be a good excuse for Martinez to blame our low league position on next season. What we really need is no Europa, a new manager, and some real pre-season games.

If we were a bit more savvy in Kiev, we may, just may have got to the semis, and then, who knows. Martinez would have been hailed as a genius, and we would have all been looking forward to launching ourselves upon the big boys, attracting the best players etc, etc. Might be our only way in...

James Flynn
32 Posted 13/05/2015 at 17:24:33
Next season is only about staying in in the league. The 38 games. Everton√ā’s immediate future needs to be focused on retaining its top-flight status. Any silverware hopes will have to stay on hold.

The TV contracts are to increase the next couple years; only question is how much? The top 5-6 are secure enough. However, every other ownership group will be fighting and clawing to get in on all that free income; not only those about to be promoted. Others behind them and at least some demoted this season. The potential numbers are enormous.

Yes, we all want to win something; any piece of silverware. Would be delightful, no doubt of it. It has to wait, though. Too much is at stake. Next season√ā’s 38 games are everything.

Patrick Murphy
33 Posted 13/05/2015 at 18:03:20
James - Whilst we shouldn√ā’t take our Premier League status for granted, I would hope that our failings this season are not repeated with or without the distraction of the Europa League. Does that also mean that we should forget about going further in the cup competitions as they too could prove too much of a distraction? If Roberto has really reduced the supporters into thinking this is the case, perhaps we should appoint somebody else to do his job.

We were told all season we were getting relegated by all these idiots yet once we got Stones in the team, Jags confidence grew, Martinez got Lennon in and Europa League was over, we look back to the one from last season.

If we avoid Europe, we will be around our usual spot of 6th or 7th unless our bloodsucking board can surprise us all and give the manager the tools to re-shape this squad.

Careful, Scott, that's akin to blasphemy on ToffeeWeb talking about our best Premier League finish under Roberto, I'm surprised you haven't been lynched.

Normally I want us to qualify for Europe but I think it's more important to bring confidence to the club and fanbase by having a decent campaign next season or the reality might be that we could be stuck with a Mark Hughes, Tony Pulis or Allardyce running our club and we would go back to the dark ages.