19/10/2015  [Jump to last]
A eulogy to mark the passing of a true Goodison great from a man who got to know the real Howard Kendall as they worked on his 2013 autobiography. 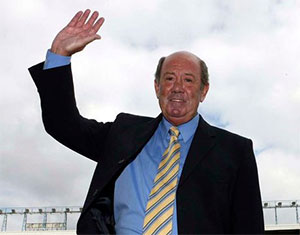 Howard was the most successful English football manager as well as one of the most significant individuals in Everton’s history. But more than that he was a good man, a nice man, loved by everybody who knew him.

I grew up as a child in the 1980s idolising the teams he managed and was lucky enough to work with him on his autobiography three decades later. By the age of 40 Howard had won two league titles, a European trophy and FA Cup as manager. These were staggering achievements and one can only imagine the hype that would follow an English double title winner today, much less one so young. They followed an outstanding playing career with Preston, Everton, Birmingham, Stoke and Blackburn. At Everton his midfield partnership with Alan Ball and Colin Harvey was considered among the greatest English football has seen.

Yet I didn’t always feel that he got the credit that he deserved. His career in football was over at the age of 52 after a near disastrous third spell as Everton manager, which was a black mark on his career and muddied his reputation. Moreover the advent of the Premier League reshaped perspectives of English football and it seemed, to some people at least, as if what happened before 1992 didn’t matter so much.

It did and it does, of course. The book that we worked on – Love Affairs and Marriage – gave Howard’s achievements the context that they deserved and did a little bit to recast him as the giant of English football that he was.

We’d been introduced by a mutual friend in 2010 and two years later agreed to collaborate on his memoir. Much of 2013 was spent either working on his book or on the road promoting it. We shared some good times.

Howard was such a gregarious character. Sometimes footballers are aloof or want to retain a distance with their public, but Howard loved being among ordinary people, the fans, sharing a chat or a story. One of my favourite memories of my time with him was popping into the Hanover Hotel in central Liverpool a couple of hours before a Liverpool home match with Aston Villa. The place was packed with fans on their way to the game. Had it been Kenny Dalglish going into a pub full of Evertonians I’m sure he would have been berated and jeered, but not Howard, who was completely at ease in their company and the Liverpool supporters were respectful and interested in the great man too. (He could, of course, have become a Liverpool player in 1967 had Bill Shankly had his way and Merseyside football history may have looked very different had that happened.) But despite the banter and the chat he never forgot his first love, Everton. Later, listening to the commentary of that game he punched the air every time Aston Villa scored in what was a 3-1 defeat of Liverpool.

He had many many friends, not just through football, but in business, media and showbusiness too. He was generous in his praise, particularly of young footballers, but never gave it easily. He had a gentle way of making people feel ten feet tall.  I always felt that his highest respect was reserved for those who had been successful outside the game, perhaps because for a large part of his career in football everything had seemed to come so easily to him and for Howard there was a mystique attached to those who had achieved things beyond football: his beloved father, Jack, who showed him the way as a player; Sir Philip Carter, who as Everton chairman forged a successful partnership with Howard, but who achieved much in business; his son, Simon, who was head boy at Merchant Taylors school and later forged a highly successful corporate career; the entertainer Ken Dodd, who he considered a genius and a force of nature.

He was always good company, a bon vivant, although there was a mythology attached to his socialising, in large part because he was always in the public eye. The last time I saw him was over dinner at a restaurant in Crosby last April, which we shared with two journalists up for the day from London. It was everything you’d want from a night: boozy, gossipy, and very very funny – albeit that I was the source of a lot of Howard’s ribbing. As one of the journalists who was with us tweeted me on Saturday when we heard the news: "There aren’t many title winning managers with whom I’ve sung the Spitting Image chicken song. That was an incredible night. What a guy. My sides hurt almost as much as my head the next morning." That was what a night out with Howard was quite often like.

I remember vividly, as an eight year old, the great sense of loss when he left Everton to manage Athletic Bilbao in 1987 but that is nothing to the sense of emptiness that I feel today. I’ll miss him dearly and my thoughts and prayers are with his wife Lily; Simon; his daughters, Hayley and Lisa; his grandchildren, who he took such pride in; and all his friends, particularly Ray Parr and Brian Greenhalgh, who were always there for him.

As for Howard, how would he like to have been remembered? In the closing passage of Love Affairs and Marriage, he wrote of his days after football:

"The pleasure comes not in reflecting on past glories, but in coming into close proximity to those that I hopefully brought some happiness too once in a while.

"People ask me how I’d like to be remembered. I’ve had a good life and a fine career, both as a player and a manager. It would have been nice to have saved the best until last, like Bob Paisley and Alex Ferguson were able to do at their clubs, but that wasn’t to be. Yet I’ve had far more highs than I have lows and possess some wonderful memories from my life in football. My wish is simple. I’d like to be remembered as someone who as a player and manager brought enjoyment to supporters. That’s all."

The outpouring of grief and fond memories of Howard from throughout the game and beyond showed that he achieved just that.