Everton being held back by Martinez's rigid ethos

The aftermath of Saturday, the latest debacle in a season that might forever come to be remembered as one characterised by unfathomable late collapses, has seen a measure of introspection and a great deal more fume from Evertonians who are fed up with having to come to terms with their team shooting themselves in the foot over and over again.

There has also been a lot of heated discussion over the minutia of the circumstances that led to another 2-0 lead bleeding out into a traumatising 3-2 defeat, specifically Roberto Martinez’s decision to take off Aaron Lennon, again one of the Blues’ outstanding players on the day, in favour of Premier League novice, Oumar Niasse.

A piece by Adam Braun for Royal Blue Mersey argues, that that specific substitution wasn’t the direct cause of the collapse that followed. The analysis is thoughtful but it largely misses the point. There was a case for Lennon, exhausted from his efforts over the preceding 75 minutes, needing to be withdrawn, but replacing him with a forward — one with barely a quarter of an hour's experience of English football to his name — was wholly the wrong decision.

As the RBM analysis indicates, West Ham had assumed complete control of the game in the few minutes after the penalty miss; it was a pivotal moment psychologically for both teams and it therefore needed a more defensively-minded substitution. The obvious choice: bring Gareth Barry on, drop back and close ranks. Unfortunately, only on very rare occasions — the goalless draw at Manchester City in January comes to mind — will a Martinez side adopt that kind of posture and almost never at home.

What Braun's piece does show, however, is that once West Ham started asking the kinds of questions of the Everton defence to which they have so often lacked answers this season — namely crosses and set-pieces — they buckled and in fairly short order. Instead of opting for the kind of backs-to-the-wall, all-hands-to-the-pump defensive posture that a team with 10 men should — and usually do — adopt, Martinez’s side were wide open and failed to close the ball down sufficiently to stop the crosses that proved so damaging. 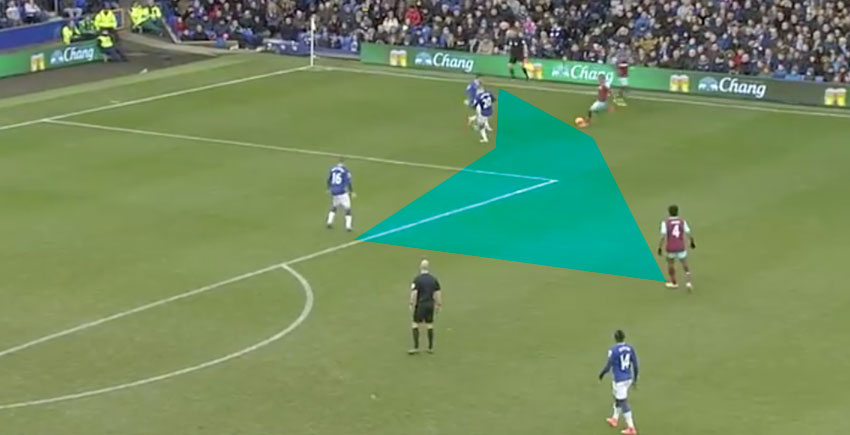 Neither of the two Everton players in attendance close down the man crossing the ball for the second West Ham goal, while McCarthy has left Song in acres of space to receive a pass 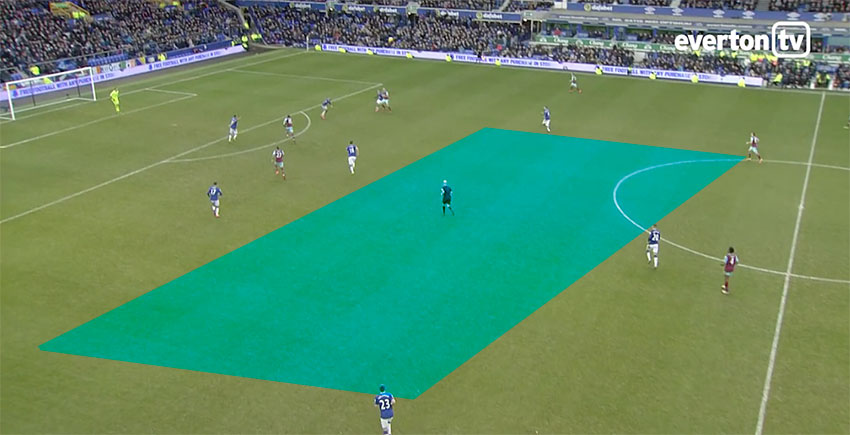 Instead of assuming a compact posture normally associated with a team playing with 10 men, Everton were wide open.

Even once Martinez, uncharacteristically, appeared to have given up the notion of winning the game by withdrawing Lukaku, he refused to pull his players back into banks of four in their own half to at least see out a draw. The point would have been essentially useless in terms of qualifying for Europe but at least it would have been slightly less psychologically damaging.

Another article by Phil Kirkbride in the Liverpool Echo highlights the lack of a genuinely dominant centre-half since Sylvain Distin was a permanent fixture in the defence in 2013-14. Martinez’s dogmatic preference for ball-playing centre halves is what drew him to John Stones while he was still manager at Wigan and then Ramiro Funes Mori last summer, but it left Everton with only Phil Jagielka as a traditional English-style centre-back — and a converted centre-half who probably lacks a couple of inches in height and more than a little of the aggression required to fit that traditional mold.

Kirkbride’s observation has merit but it, too, overlooks the bigger picture painted by Martinez’s rigid footballing ethos as a whole. It is entirely too biased towards attack and, by natural and logical extension, foregoes the essential focus on defence that is paramount to success in England’s top flight. It’s a romantic, naive and utopian outlook illustrated nicely by Patrick Boyland’s article for These Football Times where he describes the Catalan and Brendan Rodgers as the “flawed disciples of Pep Guardiola”.

In it, Boyland writes that, "The Catalan duo’s mantra is, in its purest form, a type of idealism: a steadfast ‘belief in or pursuance of ideals, the tendency to represent things in their ideal forms, rather than as they are’.

"The goal is clear: MartÃ­nez wishes to outscore the opposition and hopes to do so by ‘out-footballing’ them. He will rarely focus on corners or set-pieces in training, believing those elements to be unworthy of his brand of technical, passing football. For him, playing to percentages is tantamount to a lack of control on the trajectory of the match itself."

The irony there, of course, is that when you don’t have the ball and your players are neither set up nor instructed to effectively press and close down the opposition, you have lost control of the trajectory of the match if the other team can prey on those weaknesses, particularly when time has run out to attack your way back into it.

And the concern is that when a manager’s footballing dogma is so entrenched, nothing — not even repeated evidence of its flaws — will move him to change it. The question then becomes, of course: how much mid-table mediocrity can the club put up with?

It has been mooted that while Martinez suggested that he could ultimate guide Everton to the Champions League, a big selling point during the interview process was his commitment that he could win the Blues a trophy. If true, it represented a modest enough initial goal for both prospective manager and Chairman Bill Kenwright.

As Evertonians coalesce into their various camps on the Martinez question — the “Taxi!” contingent, the “He needs another season” brigade and the “wait and see” crowd perhaps – Saturday’s FA Cup quarter final has assumed enormous significance, not just for a season which could effectively be over by March, but also for the manager's future at Goodison.

A win against Chelsea would give Martinez more breathing space and keep alive the hopes that he can salvage something from the season. Whether that would be enough to appease an increasingly restless fanbase remains to be seen.