The story of the man who scored the first goals for Everton in the Football League. 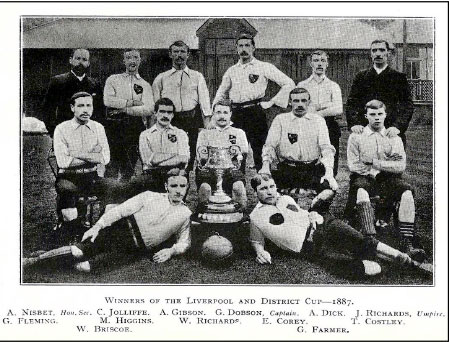 It is the summer of 1887 and the Everton team pose, at the Sandon, with the trophy they had just won after beating Oakfield Rovers by five goals to nothing. Two of these goals had been scored by a man, sitting left of the centre row, who had recently moved to Merseyside from Scotland. His name was George Spink Fleming and he was destined to etch his name in to the record books of Everton Football Club.

Fleming, along with his twin sister Jemima, was born on the 4th of November 1859 in the Forfarshire town of Arbroath. His father was the owner of a grocery store that was situated at 72 Marketgate.  The 1881 census tells us that the family had moved to number 80 Marketgate and George, then age 22, listed his occupation as that of a Bank Clerk. He was also playing football for the leading club in the area. 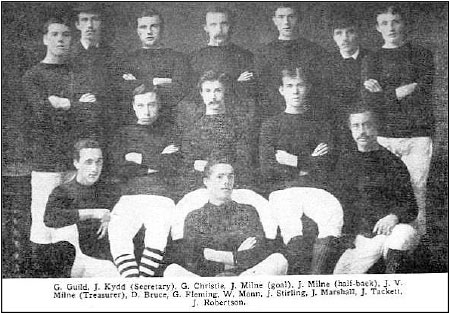 The above photograph, taken in 1882, shows the Arbroath football team in their recently-acquired Maroon shirts. George Fleming is clearly depicted sitting in the middle row. The local newspaper tells us that he had begun playing football, on High Common, for Arbroath High School before taking part in the first match played by the present Arbroath club against Our Boys (Dundee) at Woodville. The club later moved to their present home at Gayfield in 1882.

On the 15th of November 1884, at this location, Arbroath took on Rangers in the fourth round of the Scottish FA Cup. From the start, the Glasgow side tore into their opponents and quickly built up a 3-0 lead. Marshall then pulled back a goal and Fleming, shortly before the break, made the score 3-2. The Glasgow giants, who were reduced to ten men, then began to struggle. Courtesy of Crawford, Arbroath then drew level and amid scenes of tremendous joy took a 4-3 lead which they held until the final whistle.  At the close of the game Rangers took exception to the width of the Gayfield pitch, holding that it was not the required width and, after much measuring, decided to lodge a protest. The Scottish FA found in their favour and ordered the game to be re-played at Arbroath. Rangers won by eight goals to one.


During the summer of 1885 Fleming left Arbroath to take a job at the Bank of Liverpool where he would spend the rest of his working life. He has also joined Everton Football Club.

Fleming made his Everton debut on 22 August 1885 against Darwen at Anfield and first scored for the club five weeks later against Rossendale. He took part in the famous Liverpool Cup tie away at Bootle when the number of spectators was recorded for the first time on Merseyside at being over five figures. Fleming also took part in the game against Glasgow Rangers, drawn as an FA Cup tie, where Everton scratched to allow him, and other ineligible players, to take part in the game. He ended his first season on Merseyside by helping Everton to win the local knockout.

He rejoined the Everton club next season and took part in the marathon FA Cup tie, which led to their suspension, against Bolton Wanderers. Fleming remained with Everton throughout the rest of a rather uneventful season and was on the club register when they became founder members of the new Football League in 1888. He represented them in the opening fixture against Accrington.

The match took place at Anfield and it attracted the largest crowd of the day at over 12,000 people. Fleming took up position in the home forward line. The game had been in progress for about an hour when George Farmer crossed the ball to Fleming who headed himself in to the record books by becoming the man to score the first goal for Everton Football Club in a Football League match. He then added a second as they won the game 2-1. Fleming, nevertheless, made only three more appearances for Everton before being replaced by Edgar Chadwick who had joined them from Blackburn Rovers. Fleming, it was reported, then joined Gorton Villa before returning to Everton where he became a member of club committee. In May 1891 he tendered his resignation to concentrate on his career within the banking industry.

He is missing from 1891 census so it must be assumed that he was lodging somewhere in Liverpool. Fleming next appears in the record books when, on the 17th of July 1900, he married Margaret Crawford at the church of St John in Waterloo.  His wife, who resided at 40 Great Mersey Street, was the daughter of a Scottish born Iron Foundry owner who employed over one hundred people.

The 1901 census finds the couple living at 33 Cavendish Road, Crosby where they employed one servant while the 1911 census lets us know that they had moved to 59 Winstanley Road, Waterloo and they then had two sons. David – who was nine years old and Noel who was one. However, the census does not reveal that the head of the household was suffering from ill health and he died at his residence on the first of April 1912. George Fleming, who scored the first Football League goal for Everton Football Club, was later buried at Anfield cemetery in Liverpool.

Bootle gets a lot of mentions in your early historical reports so I guess they were a major force at the time but never made it into the League... Are they still in existence? It shows how important some of these turning points can be... we got into the league and they didn’t... Mind you, it didn’t help Accrington Stanley!! Or ultimately hold back Newton Heath.

Tony Onslow
6 Posted 14/01/2016 at 13:26:06
Mike, Don't know where George is buried but will find out shortly and let you know, Going up to Arbroath in April to watch the Derby game with Montrose. There is, opposite their ground, a pub called The Tutties Neuk, where, I believe, the fitba crac is 90.
Tony Onslow
7 Posted 16/01/2016 at 17:51:32
David the Liverpool Cup graduated into the Liverpool Senior Cup, Everton still compete in the tournament but contest it with the Academy side.

The trophy is not the original one because that was stolen, from a shop window, sometime around the beginning of the last century.
Tony Onslow
8 Posted 09/10/2016 at 13:22:38
George Fleming is buried in the Church of England section, grave number 7/767.