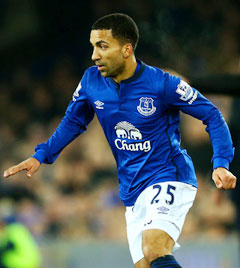 Everton registered their third 3-0 victory in succession with a dominant display at the Britannia Stadium where the match was effectively won by half time thanks to an early penalty by Romelu Lukaku and goals from Seamus Coleman and Aaron Lennon.

Were it not for some goalkeeping heroics by Jack Butland in the second half, the scoreline might have been even more humiliating for a Stoke City side that looked a shadow of the one that plundered a 4-3 victory at Goodison Park just six weeks ago.

Roberto Martinez had named an unchanged side from the one that eventually brushed Newcastle United aside on Wednesday night, with the in-form Lennon keeping his place wide on the right, Joel Robles continuing in goal in place of the injured Tim Howard and Leighton Baines again, surprisingly, named among the substitutes to the benefit of Bryan Oviedo. New signing Oumar Niasse received his international clearance but wasn't deemed fit enough to be included.

And there were early indications of what was to come when the Costa Rican won a fifth-minute corner and Ramiro Funes Mori’s unchallenged header was deflected wide by Erik Pieters.

The visitors would be handed the chance to take the lead just five minutes later, however, when Oviedo, impressive throughout in both defence and attack, collected Ross Barkley’s sublime heel-flick and threaded Tom Cleverley in behind the Stoke defence where Butland committed himself and the midfielder cannily left his foot in where the ‘keeper could only bring him down.

That left referee Andre Marriner little choice but to point the spot and Lukaku drilled the resulting kick straight down the middle to set Everton their way. In doing so, he became the first Everton player since Graeme Sharp in the mid-1980s to score 20 goals in successive seasons.

After more sparring where Mark Hughes’s men tried in vain to pick their way through Martinez's pleasingly organised back line, the Toffees doubled their lead after 27 minutes. Ibrahim Affelay conceded a corner on Everton’s left under pressure from Gareth Barry and Coleman evaded his marker brilliantly before throwing himself at the dangerous dead-ball delivery and guiding a header into the far corner.

Then, with three minutes left of a first half that had been interrupted by treatment to James McCarthy and Gareth Barry, Lennon smartly intercepted an errant pass along Stoke’s makeshift defence and sprinted into a one-on-one confrontation with Butland that the Everton winger won by slotting confidently home to stretch the lead to 3-0.

The Potters, who had struggled to test Robles at all in the first half, finally engineered a way through a couple of minutes later but Marko Arnautovic could only shoot tamely at the goalkeeper.

There would be no miraculous Stoke comeback in the second half and they would find themselves continually frustrated going forward themselves by Everton and then vulnerable to the counter-attack as they went in search of a way back into the contest.

Indeed, the Blues could have piled more misery onto their hosts shortly after half time but Barkley smashed a shot from the angle into the side-netting a few minutes before he served up what looked certain to goal number four for Lukaku but Butland made an excellent reflex save to push his header onto the crossbar.

And the Stoke ‘keeper was on hand again in the 63rd minute to foil the Belgian as he prodded a loose ball goalwards after Marc Muniesa had blocked his initial shot from Lennon’s cutback. McCarthy then hammered a 20-yard effort just wide, Butland foiled substitute Arouna Kone with another superb save as the Ivorian raced clear, and Funes Mori planted a free header well wide with 12 minutes left.

In between, Stoke’s last real chance to salvage something from the game had been parried away by Robles as Glen Johnson let fly from distance before Kone just overcooked his knock-on for fellow sub Kevin Mirallas and a gilt-edged chance to put the icing on the cake went begging.

So, no additional goals in the second half but Martinez and his players can take enormous satisfaction from what was a remarkably routine victory over a team that has spent big money and attracted a lot of attention this season for Hughes’s squad-building efforts.

The win lifts Everton above Stoke back into the top half of the table and puts a different complexion on their Premier League prospects, just when it looked as though all hope of challenging for a place in the top five or six places had gone.