After many years of searching, I finally managed to find a newspaper report confirming the last resting place of the Everton benefactor Dr James Clement Baxter.

Tony Onslow 17/10/2016  |  Jump to last
After many years of searching, I finally managed to find a newspaper report confirming the last resting place of the Everton benefactor Dr James Clement Baxter.

I discovered it in the Liverpool Catholic Pictorial and I am posting the full article for all members of ToffeeWeb to read because, rather strangely, Everton Football Club do not appear to be represented. 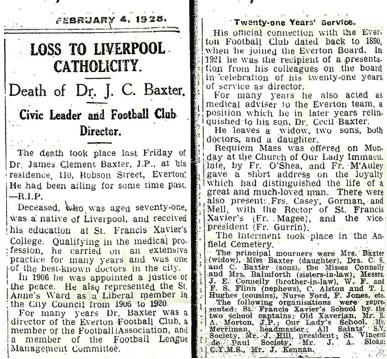 The text reads as follows:

The death took place last Friday of Dr. James Clement Baxter, J.P., at his residence, 100 Robson Street, Everton. He had been ailing for some time past. – R.I.P.

Deceased, who was aged seventy-one, was a native of Liverpool and received his education at St. Frances Xavier's College. Qualifying in the medical profession, he carried on an extensive practice for many years and was one of the best-known doctors in the city.

In 1906 he was appointed a justice of the peace. He also represented the St Anne's Ward as a Liberal member in the City Council from 1906 to 1920.

His official connection with the Everton Football Club dated back to 1890 when he joined the Everton Board. In 1921 he was the recipient of a presentation from his colleagues on the board in celebration of his twenty-one years service as a director. 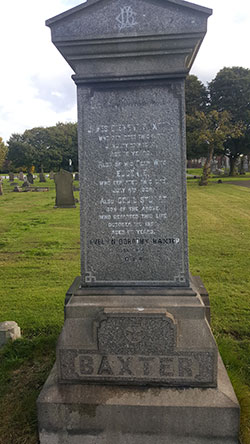 For many years he also acted as medical adviser to the Everton team, a position which he in later years relinquished to his son Dr Cecil Baxter.

He leaves a widow, two sons, both doctors, and a daughter. Requiem Mass was offered on Monday at the Church of our Lady Immaculate by Father O'Shea and Father McAauley give a short address on the loyalty which had distinguished the life of the great and much-loved man. There were also present Frs Casey, Gorman and Mell with the Rector of St Francis Xavier's (Fr. McGee) and the vice president (Fr. Gurren.)

Dr. J. C. Baxter The Chairman reported the death of
Dr. J. C. Baxter & in doing so deeply deplored
the loss of one of their colleagues who had
been associated with the club since its
inception & who had been a valiant worker
in the clubs interest during the whole of the
period. He was sure they would all agree
with them that his loss would be severely
felt. A letter of condolence had been sent
by the Secy. to the members of his family