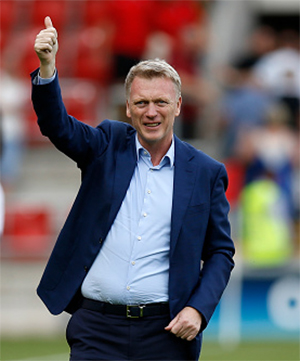 David Moyes has been appointed Sunderland manager in the wake of Sam Allardyce getting the nod for the England job.

After getting the sack from his dream job as manager of Manchester United after only 8 months, and then suffering a similar fate at Real Sociedad, the former Everton boss now takes the reins at the Stadium of Light.

The appointment offers the Scot a route back to the Premier League after an absence of more that two years following that fateful occasion at Goodison Park in April 2014 where the ominous form of the Grim Reaper baited from fom the crowd.

Moyes spent 11 years in charge of Everton where he was able to stabilise the club after years of struggles in the wrong half of the table and two brushes with relegation but he was unable to push the club to the next level.

Though he solidified the Blues as a perennial top-eight presence, he routinely found the glass ceiling between his team and the Champions League places impenetrable and he left Goodison with many supporters believing he had taken Everton as far as he could.

His remit at Sunderland will be similar to that which greeted him when he assumed the helm at Goodison in the spring of 2002 — revive the fortunes of a top-flight club that has battled at the wrong end of the table.

Whilst I (like many others) was very upset with how he left and his behaviour towards us after he left, it doesn't wipe out all the good stuff he did for us.

He did stabilise our club, he did get us back into Europe (before he came ,we were an absolute shambles so this was a major step forward), he got us to a FA Cup fFinal, 4th in the league and bought some fabulous players: Arteta, Pienaar, Cahill, Yabubu, Lescott, A Johnson, Saha, Baines, Coleman etc. People forget but we played some great stuff at times.

When I put his behaviour and what he brought to Everton on the weighing scales, the positive massively outweighs the negative. Why hang onto the negative like some jilted lover? We're a bigger better club now and Moyes contributed to our financial stability and all the good things that's led Moshiri to buy us.

Good luck, Mr Moyes, but I want 6 points off you every season mate!

Get over it, this is football and we'd hsd enough of Moyes anyway.

Good luck to Big Sam btw. At least he will restore some pride to England.

Bobby Thomas
12 Posted 24/07/2016 at 10:27:00
Lets be honest, in the post John Moores ownership period Everton were reeling and didnt have a clue what they were doing.

Won't go into everything here,but I feel that at a time when the club really was in a very precarious position and could have gone down Moyes came in and re-established professionalism, standards and respect.

I also thought, for balance, the semi final surrender to the shite was disgusting and paiful to watch. The players visibly wilted.

However on balance he was very good for Everton and the perfect manager at the perfect time. A young, hungry, intense manager who shook the place up and basically said "Right, I dunno whats been going on here but it fucking stops."

Compare his record to the last fella.

Ater a good two thirds of a first season thanks to the base left by Moyes, coupled with an opening up of approach, and sunny new feel good factor, it actually became apparent from the following pre-season that he was an incompetent who was performing a demolition job that would likely have been finished off this season in the form of relegation. All in 4 seasons. Well, Martinez wouldn't have got to the end of his 4th, he'd have been sacked before autumn was done.

This would have been achieved with the base left by Moyes and access to more dollar than Moyes ever had.

No comparison between the 2 managers and as time goes on I think people will ease off on Moyes. If I feel contempt towards anyone its Martinez, not Moyes.

I would not be surprised to see some of our players on the periphery making their way to the North East...sadly not the ones Martinez brought in and we are going to struggle to make money back on...

Good luck to him but hope his knife comes out to the Everton gunfight.

James Stewart
21 Posted 24/07/2016 at 13:01:16
Extremely good appointment for them he will improve them without a doubt. I don't think there has ever been a season with so many top managers in the EPL. Every point will be have to be hard earned.
Andrew James
22 Posted 24/07/2016 at 13:04:55
Colin - interesting you say that. I reckon Burnley would have learned a lot from 2 seasons ago and will remain. Hull aren't looking in great shape admittedly.

Leicester to go down? Nah. I reckon there will be some humdingers at the King Power as sides throw everything at them and they get narky but they won't go down.

My shout is for Bournemouth, Hull and Watford for what it's worth.

Everything Moyes did was with BK's aquiescence, believe me. But then, when Everton de-stabilise a smaller club, it doesn't count!

It's a shame he ruined it by talking shite when he wanted Fellaini and Baines.

As for Sunderland? 15th.

There's this adage that says: "Be good to people on your way up because you might meet them on your way down..."

I am sure Moyes would forgive and forget.

So now they say it was nailed on 6 months before (so how was it never going to happen??) and moan about compo which is not applicable when an employee fulfills his contract.

The same people usually decry the lack of loyalty in players wanting to move on, and criticise them for 'running down their contracts'.

Like you, to me he's another in a line of managers that will not be remembered for their trophies.

All he had to do in my eyes was to say he wasn't signing a new contract, instead of leading people on that he was thinking about signing another. From there I'm sure a hell of a lot of fans who don't now like the man would have a different opinion...

Honesty in the game is a very rare thing which would I believe have been appreciated and maybe even applauded (by some).

Eric Myles
39 Posted 24/07/2016 at 16:08:19
Pete #38, there was a lot of bitterness at the time from those who said he would never get the Utd. job, before he even made the bids for Baines and Fellaini.
Pete Edwards
40 Posted 24/07/2016 at 16:13:38
Eric, I'm not dissagreeing with that you'll always get a small few who see their backsides at being proved wrong but, the majority of the bitterness came from how it transpired that he deliberatly ran his contract down while leading people on that he was still thinking about signing one knowing full well he had no intention at all.

Jay Harris
41 Posted 24/07/2016 at 16:25:48
Lets get it straight he never once said he was going to renew his contract and as Phil said it was well known that BK knew about him leaving 6 months before and Martinez was lined up which is why some of us describe it as a lazy appointment.

Although I despise the way Moyes viewed and treated us as inferior to Man U I have to give him credit for what he did for our club on a shoestring budget while he was here.

Good luck to him at Sunderland where they will both find their level.

Danny was less of a shrugger, more of an irritating, ginger, freckled-faced twat.

While at Everton, he did what he was paid to do and didn't put a wrong foot forward. While at Man Utd, he tried to do what they should have let him do, including trying to coax players he thought could be Man Utd players from other teams, including his old one. All managers do it and you have to say something to convince them why they should move don't you?

Worked out well for him last time....and the time before that. Unless "do us down" was just a typo and you actually meant he knows "how to dour down"? In which case, who could disagree?

"Ask him something a bit cheeky, in a breezy sort of way - see if you can get him to do that thing he does when he doesn't like a question"

Nobody supporting Everton should have wished him success in Manchester, but he didn't deserve the hate either. Anyone being objective would have to admit that moving from Everton to United would be a step up. I hope that changes under the new ownership. But at the time, a fact is a fact regardless of how it makes you feel.

I'm sure he'll do just fine at Sunderland, but I really don't care. I hope they stay up since they are a decent fan base. But I hope we beat them every time we face them. Why is that such a hard thing to embrace?

To paraphrase the joker in one of those batman movies:

"I wonder where he gets those wonderful links from"

This is football and that is what football has become. Who cares about the fans? Let's line our pockets and fill our boots. Players, agents, chairpeople, managers – the lot.

Let's insert a few release clauses, appearance bonuses, caps for his country, amount of games played in a season, etc,etc. In fact, it's only us who are taking the whole thing seriously!