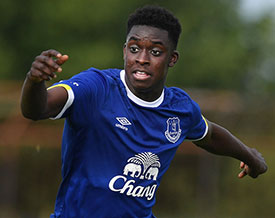 The Blues' new loan signing from Wolfsburg was given his first run-out in Premier League 2 and claimed an assist for the second goal as Courtney Duffus and Bassala Sambou both found the net to put David Unsworth's team six points clear at the top of the table.

Donkor was into the action quickly, winning a first-half penalty for Liam Walsh to despatch but the midfielder's spot-kick was saved. Donkor then missed a great chance at the back post and the Blues hit the woodwork as they continued to boss the game.

Walsh went close later in the half with an effort that was cleared off the line by United but Everton's pressure told when Courtney Duffus finished off a lovely move to put them ahead. Kieran Dowell found Walsh whose first-time knock was curled into the corner by Duffus as Everton took a 1-0 lead into the break.

United had the chance to level the game almost immediately after half-time, however, when they were awarded a penalty for a foul by Matthew Pennington. But they spurned the chance when Harrop blasted over from 12 yards.

However, when the hosts were given another penalty a few minutes later, Mitchell stepped up and converted to level the match at 1-1, a reflection of the fact that they had taken control of the contest.

Everton hit back though and restored their lead with a terrific finish by substitute Bassala Sambou from Donkor's pass and the striker doubled the advantage soon afterwards when the visitors were awarded the fourth penalty of the night from another Donkor through-ball.

Sambou, one of two changes made by John Ebbrell — Unsworth was not in attendance, sparking speculation he was off concluding another transfer deal — after United's goal, stutter-stepped to send the 'keeper the wrong way and tucked the ball into the opposite corner to make it 3-1.

Harrop cracked a dipping shot off the bar as the home side tried to find a way back into the game in the closing stages but the Blues held on to another fine result.

We're barely getting a touch.

Missed most of the good stuff – but the likes of Sambou & Donkor are already physically quite big & capable!

Michael # 26, that did have me muttering like Mutley - "Fuggingfisherfuckingpriceunitednobheads"

Donkor really impressed me. Intelligent player with a real physical presence who played a number of excellent through balls.

Sambou was a handful when he came on.

Walsh was good in the first half, but faded and was then injured.

Wasn't impressed by Dowell I'm afraid – largely anonymous in the stuff I saw at least.

And Kenny wasn't as good as I remembered.

Ray Robinson
32 Posted 30/01/2017 at 21:30:57
Just back from the match. For the first time in ages I have seen a young Everton team blessed with pace. Anton Donkor looks a very powerful pacey player and I was impressed too with Courtney Duffus. Bassala Sambou looked a terrific prospect when he came on and scored a great goal, holding off two defenders before poking past the keeper. Pennington looks like a natural leader and was solid throughout. Nobody had a bad game.

We looked compact in defence and very disciplined with two banks of four, snuffing out United apart from a twenty minute spell immediately after half time. Energy levels and ball retention were good and interceptions plentiful.

It was only a Premier League 2 game, but the seeming coherence of our players working together, left me wanting more for our main team!

Paul Birmingham
36 Posted 30/01/2017 at 21:59:15
Back from the game and a well earned hard fought victory. Well organised and should have gone in at HT at least 2-1, up. Second half and a few changes they canned us for about 15 mins and some resolute defending and we picked them off. Happy days and let's hope for more good results for us this week.

NB Donkor looks very sharp and Foulds and Pennington looked solid. Let's hope that this team can manage out the last 6 games and win the league. Not getting too carried away but genuine optimism is springing up for the future of our club.
Paul Conway
37 Posted 30/01/2017 at 22:07:54
This outfit could have gone far in the FA Cup had we decided to field them instead of the seniors ... A current trend at the minute.

Maybe we don't to spend millions on a new striker after all.

Liam Reilly
39 Posted 30/01/2017 at 22:21:04
Was watching the text updates on the OS; why did Walsh come off, injury or precautionary?
Mike McLoughlin
40 Posted 30/01/2017 at 22:51:16
Went to the match tonight and was very impressed with a very well organised Everton under 23 side. They absolutely controlled the first half where Man Utd were reduced to one scrambled attack on Goal.

Where the blues had several chances and with a little more composure we would have gone in at half time more than the one ahead. I was particularly impressed with Pennington alongside Feeney, a good partnership. Charsley had a great first half in the middle, along with Walsh. Dowell showed some great touches on Everton's right and Donkor impressed on the right, looking strong, pacey and skilfull. Duffus scored a good goal with a great build up.

To be fair all of the youngsters impressed and must mention both full backs Foulds and Kenny controlled the Utd attacks very well and Dyson was busy up front. The second half began and for the first 20 minutes Utd were in the ascendancy and the blues couldn't get hold of the ball and Utd were awarded a dubious penalty which was blasted over the top of Hewletts crossbar.

Not long after that Mitchell tapped the Ball past Feeney only to grab Feeney's arm then tumble over, penalty which was dispatched well to Hewlett's right. 1-1.

Ebbrell made a double change bringing on Broadhead and Sambou. This immediately turned the game back in Everton's direction and it wasn't long before Sambou showed great strength and skill to put the blues up 2-1.

Ronald Koeman was in attendance and would have been impressed with Pennington who organised the back 4 very well and was on the end of most crosses put into the box. The future looks bright, the future is Blue.
Barry Pearce
41 Posted 30/01/2017 at 22:59:26
Great result.

Hope Walsh is not injured again.

Liked the look of Sambou too when he came on – style and swagger reminded me of RS Sturridge (before he was shit) much more lively than than Dyson and Duffus.

I'm made up Ronny was in attendance to see the lads first hand, and great to hear Donkor and Sambou were impressive.

Koeman and Moshiri after assessing the situation are laying the foundations to a successful future.

For the guys who were at the match, what formation did we play? Any names in the Man Utd team?

James Morgan
49 Posted 31/01/2017 at 12:24:22
This match was only round the bloody corner from me, only realised when it was halfway through otherwise I would've gladly had a gander at what our kids were like and reported back to TW with a review of some sort. D'oh!

Pennington was out injured for quite a while and has missed most of the season so far. The young centre half tore his hamstring during pre-season and has been on a long path of recovery, returning to the Under-23s side earlier this month as they beat Sunderland.