Koeman demanding more of... everybody! 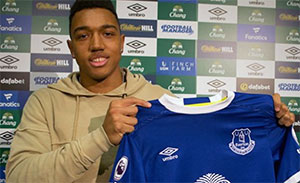 Ronald Koeman said Anton Donkor did well on his U23s debut but admitted he was not 'impressed' per se, at least in his interpretation of the word.
From new U23s loanee Anton Donkor to the first team's need to keep upping their pressing game, the Ronald Koeman has left no one in doubt of his high standards.

The Everton boss was relaxed and on good form in his press conference with the broadcast media at USM Finch Farm this afternoon but his comments underlined his commitment to excellence across the board when he was asked about his team's ranking as the fourth-best team in the Premier League when it comes to the pressing game.

He acknowledged that he was pleased with the progress made by his charges over the past few months but stressed there was room for improvement.

“That's still not good enough,” the Dutchman said. “We like to be the first, but we need time for that.

“Sometimes we can [press] very well and at a high level and sometimes we need to do it better.

“It starts with the strikers and that's sometimes the most difficult for them to do because they like to play and score and it starts by doing pressing.

“It was one of the changes we made [when I arrived]; not to be a team that is waiting for mistakes from the opponent but a good pressing team, with a higher pressing line.

“But we are improving and it's good to know [that we are ranked highly] but it's still not good enough.”

Koeman was also asked about Donkor's performance for the second string at Manchester United earlier this week and his prospects of perhaps stepping up to the first team at some stage as a result.

The 19-year-old made what was generally accepted to be an impressive debut following his arrival on loan from Wolfsburg but Koeman showed his desire to be wowed on that score as well, even if it was expressed in his interpretation of the word "impressed".

“I was in the stadium. Impressed? No. Impressed is [when you see] something you did not expect.

“Of course, I spoke to the boy about getting an opportunity to be part of the U23s and maybe sometimes he will be involved with the training sessions with the first team.

“He did well, especially in the first half. The whole team had it difficult in the second half but I wasn't ‘impressed'.

Asked if he expected more from Donkor, Koeman smiled: “I expect more from everybody.”

As blunt as ever!

The other 16 teams behind us must be absolute crap at it.
We haven't worked out how to press at all.Not a clue.

Ronald. "It dependsh if you're comparing it to a rhino or a meerkat my dear, but generally I would have to say yesh it looks like two very large water melonsh in a very shmall carrier bag."

Dermot Byrne
6 Posted 03/02/2017 at 17:49:10
Disagree John G. There have been times we have done it well. The arsenal game a good example after fans got on their back. Then I think some of the older players lose their bottle and revert to previous style of play. Having slow centre-halves doesn't help. Also Lukaku needs defending from the front explained.

Funny thing is when we do it the fans love it and Goodison puts other crowds to shame. You'll see that as the team becomes Koeman's and previous regimes become memory, we will be really good at pressing and other teams will dread it.

I wash my hands of the whole debate and look forward to the time when we have a good team with good players who can play good football and most importantly win football matches.

I would say Yes, we will challenge, but how well we challenge is open for debate!! The team will be more combative and hopefully more feared than in the past 3 years of Bobby – the king of how not to defend!!

Paul Tran
20 Posted 03/02/2017 at 20:18:35
The first presser I've seen where he didn't look like a bulldog licking piss off nettles. Even my Dutch wife remarked that he sounded less inarticulate than usual.

He's got rid of most of those he wanted out. It looks like he's broadly got them playing the way he wants. He's looking and sounding more confident.

For me, that means he's running out of excuses and it's time for a proper run.

Looking forward to tomorrow and envious of those who will be there.

This is the measure for me...

Logic at its best!

If he can motivate his players for the rest of the season and finish better than we started then I think next season we will be hard team to beat.

Phil Jeffries
29 Posted 04/02/2017 at 04:36:20
This time last year, we were listening to El Fraud spouting off his usual rubbish as we slid further down the league. Now we have a manager who says it as it is and we are no longer the easy push overs we turned into. I love it.

Lukaku needs a real kick up the arse though.

I concur with that statement.

'Poor touch, poor finish' means they're playing shite if they can't connect with the ball to score a goal even where the performance is otherwise good in the game.

...and no Chelsea. Too busy playing league-leading football to spend all their time pressing!

Colin Glassar
42 Posted 05/02/2017 at 17:22:35
I posted earlier a comment about Koeman (rumours) ruffling some feathers at boardroom level. On the wrong thread by the looks of it.
Chris Williams
43 Posted 05/02/2017 at 17:53:50
Colin, I've little doubt about whose feathers are looking a touch on the ruffled side. There have not been any comments of late about how Bill is a fine Chairman who gives up every penny he can find to allow the manager to scratch around for fades in the bargain basement.

Moyes and Martinez were adept at that, and rumour has it he would have kept Martinez but wanted Moyes to replace him. Obviously didn't fancy Ronald then. I bet he doesn't now either.

Not much being placed in the press either.

Colin Glassar
44 Posted 05/02/2017 at 18:19:11
I've been told he fell asleep while Chairman Bill told him how he thought up the idea for Cats when he was a kid in the Boys Pen and how his Auntie Betty made the best Lancashire hot pot in, well, errmm, Lancashire.

He's also been heard to tell Bobby E to get his finger out of his arse and stop playing Candy Crush on company time.