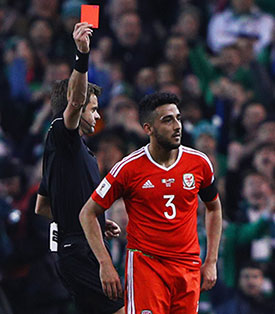 Taylor was shown a straight red card for the tackle that broke both bones in the Everton fullback's right leg but the Football Association of Wales have been informed that the game's world governing body have opened proceedings into the incident that could end in further action.

Taylor's automatic one-match suspension could be extended to three international fixtures based on referee Nicola Rizzoli's report of the game.

Ireland head coach Martin O'Neill told the media that while the 28-year-old was understandably down in the immediate aftermath, he left hospital in better spirits.

“It's as much to do with he's still got the family around — his brother, his wife, his mother and the youngster all keeping him pretty busy,” O'Neill said. “I think he's doing much better now. It's not something you're going to get over in 24 hours, 36 hours. He's in much better spirits.

“It's encouraging to see. He's very positive, which I knew he would be. It's a tough injury. Could he get over it? If anybody can quickly, then Seamus can do that.”

Will be interesting to see if the Welsh FA/Chris Coleman lodge an appeal against further sanctions, as he is "not that type of player".

The point, also mentioned in the linked Guardian blog, relates to Taylor's intent and the extent to which it may have actually been accidental:

"Because of the escalating level of recklessness within the game in Dublin, it is impossible simply to wave it past as an accident either. Taylor has got to be at least guilty of behaviour likely to result in injury and, because his behaviour actually did result in injury, it is no surprise to discover Fifa is considering lengthening his ban."

Stan Schofield
5 Posted 30/03/2017 at 15:54:16
Seems appropriate. A strong deterrent is needed for reckless challenges whether they lead to serious injury or not.

Not quite sure why any ban should be confined to international matches though. Including all matches would give a stronger deterrent.

Dave Abrahams
6 Posted 30/03/2017 at 16:02:41
Not going in to the rights and wrongs of the tackle but I'm surprised that a player is only banned for one match for a straight red card. Why are International games different to league games, as far as punishment is concerned?
Mike Berry
7 Posted 30/03/2017 at 16:05:49
This type of tackle needs a punishment to suit, a 6-month ban would not be out of place, the lad had both feet off the ground, he knows the score, take your penalty, don't moan and don't even think about an appeal.

We need people with backbone to sort this out, and keep the game from ending players careers. I watch with interest to see the responses.

And for inspiring confidence in the ruling body, just look who's head of the Referees' Committee!!! OMG.

Sorry to say this is an over reaction from Fifa. Would not surprise me if they try to hit the Welsh FA with the bill for Coleman's wages.

I agree it was a 50-50 where our guy was left on the floor with a broken leg. A terrible business for Coleman and us.

I'll guess FIFA will see it that way. Whatever way they see it, get better Seamus.

We'll need you this time next year as we're challenging for the Title. Hopefully, Bolasie is back full strength at the same time!

James Hughes
11 Posted 30/03/2017 at 16:37:11
Michael, re: the Referees' Committee. What we need is a Frost/Nixon style interview. Gentle questioning with signore Collina about his conduct in that game, eventually leading to full disclosure.

My memory of that night is he gave us nothing all game all game, but then that could just be age.

Michael Kenrick
12 Posted 30/03/2017 at 16:38:27
I don't quite follow how you figure it to be an over-reaction from Fifa, John (#9). You're saying there's no need for them to look at this and possibly extend Taylor's ban? So one game is sufficient deterrent for reckless tackles like this?

The crazy thing, as Dave (#6) says, is why it's only one game for a straight red card shown for excessive force, when that is a three-game ban in the Premier League.

A joke of a organisation and bent as they come, agreed.

The most watched league on earth is England's Premier League; without doubt. Which makes Coleman's leg-break international news.

I've looked at many videos of the circumstances leading up to the leg-break. James Marshall and Kenrick called it correct. A 50-50 gone terribly wrong.

I wonder what standard of reffing half of these guys have?

If anything, I'd rather he was made to play, because he's shite and that would be a bigger hinderance on his country's chances of qualifying.

It's all about looking after our player now. Can't be arsed even thinking about this no-mark.
Liam Reilly
19 Posted 30/03/2017 at 18:41:41
Shocking challenge for sure, but also happens regularly in the Premier League.

I can think of 2 equally poor 'Leg Breakers' from Rojo this season (one at Goodison) that weren't punished because the player on the receiving end managed to get up.

If a player leaves the ground and dives in two footed, then they should be banned – regardless of whether the opposing player is injured or not.

The abuser went on to play for Arsenal, incredibly, only God knows how that happened, and then furthered himself in a media career. Who says crime doesn't pay?

"Crowd Disturbance (1 Bengal light)" . I had to google what a Bengal light was. I'm going to sound so clever when my mates call them flares.

"Improper conduct among supporters, including objects (plastic bottles) being thrown,
one team official touched" . touched where?!?! By whom? A supporter?

"No flags hoisted and flown in the stadium" NOOOOOOOO!!!!

I don't know why but if you ever get to hear any of his remarks you will see what I mean. He was and is a prick.

Depends, I suppose, if you spell bollocks "bollocks" or "bollox".

I've held my tongue on this and as sick as I am over losing Seamus Coleman, it's done and that's that.

I can remember a few of our players putting the boot in, quite recklessly as well; it's a contact sport and shit happens.

It's just unfortunate it happened to us.

Mirallas on Suarez, he went out to hurt the buck toothed biter and 2 terrible tackles in the last Derby. One by Ross Barkley which could easily have smashed the lads leg.

I think between us the point's been made, though.

Phil Bellis
38 Posted 30/03/2017 at 22:42:15
Well Dave, what should the sport do to curtail the shit happening? Maybe a retrospective charge of "reckless play".. Oh... hang on...
Dave Abrahams
39 Posted 30/03/2017 at 22:51:41
I remember the tackle by Stevie McMahon on John Ebbrell at Anfield. It might have been a cup game... Stevie got carried off and Everton got the foul; he tried to bully Ebbrell but John stood his ground and Stevie hurt himself.

Whether a leg was broken or not, reckless behaviour should be punished as a deterrent, whether it's an opposition player or an Everton player.

The game you refer to, I was there, and the event with Inch, note I do not say tackle was a disgrace. You will also recall that Peter Reid took vengeance on him and at the end of the first half, one of the most nauseable players ever was left on the track round the pitch by the Bullens stand. I make no apology for cheering as he was stretchered away, and I hate him. Yes, hate. He destroyed Inch.

On a different note, I met John Ebbrell just before the 1995 FA Cup Final when he was dropped. I loved Johnny, told him so, he took offence when I told him, till I explained I loved him for not pulling out of the tackle when McMahon tried to break his leg at Anfield. Again, no apologies, I cheered McMahon being stretchered off, he got what he deserved.

If you think it was a one-off, google what he did to Kyle Walker's face, and I'm told there are other instances. The game doesn't need thugs, it needs attractive players, entertaining and skillful, being protected by those who administer our national sport.

You can bet your life if it had happened to Aguero, Hazard, Sterling, Sanchez et al, Sky Sports would be running a poll to bring back capital punishment.

Bob Butchard
44 Posted 31/03/2017 at 03:36:19
Liam (#19) I fully endorse your comment about the punishment fitting the crime, regardless of injury occurring or not. Two feet off the floor diving in.... automatically marching orders, regardless.
Dan Egerton
45 Posted 31/03/2017 at 07:16:17
"Not quite sure why any ban should be confined to international matches though. Including all matches would give a stronger deterrent." – I agree although I cant see it happening.

"Not going in to the rights and wrongs of the tackle but I'm surprised that a player is only banned for one match for a straight red card. Why are International games different to league games, as far as punishment is concerned?" – Agree.