Schneiderlin to miss the derby and United trip 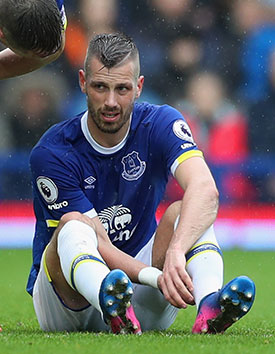 Everton will go into two of their most difficult assignments of the season without the key figure of Morgan Schneiderlin after Ronald Koeman revealed that he is still a week away from full fitness.

The French midfielder sustained a calf injury against Hull City a fortnight ago and has been ruled out of tomorrow's Merseyside derby and the Blues' trip to his former club Manchester United on Tuesday.

The news comes following injuries to Seamus Coleman, Ramiro Funes Mori and James McCarthy that were suffered by players on international duty and it left the manager ruing a costly couple of weeks for his team.

“Maybe one of my worst international breaks with what happened with some injuries,” Koeman said.

“I have good hope that he will be back for next weekend.

“Seamus Coleman, of course, was a shock last Saturday evening and what happened to Funes Mori is that he suspects [he will need] meniscus surgery after Monday."

Back for the Leicester game next weekend... which will be a nothing game if we take only one point from these two away games. We needed Schneiderlin and McCarthy available for these.

Gutted to lose key players but still think we can win. (We must... or, like Jim said, if we can't get at least 3 points from the next 2 games, we'll just finish 7th and that's it.)

Shane Corcoran
3 Posted 31/03/2017 at 15:57:21
Am I blind, or has he actually ruled out McCarthy?
Ian McDowell
4 Posted 31/03/2017 at 16:07:46
Shane, I can't recall him confirming either way about McCarthy being available for tomorrow.
James Hughes
5 Posted 31/03/2017 at 16:10:03
It's another blow and one we really didn't need right now. We are not that far behind the RS in terms of quality on the pitch, even with the absentees. We 'just' need to turn up and get a result, which I believe we can. [Crosses fingers]
Dean Johnson
6 Posted 31/03/2017 at 16:21:16
Bugger, looks like Gana will have his work cut out tomorrow
Dave Williams
7 Posted 31/03/2017 at 16:27:08
A big blow but, as James says, it is attitude that counts tomorrow. If we field a team of players who hate the thought of losing to that nauseating shower across the park then we have a decent chance notwithstanding the injuries. If, however, we field a lot of "hope we can have a pleasant beer after the game whoever wins" players then we will get stuffed again.

Need some fighters – Gana and Davies will be fine and we need Ross and Rom to really put some effort in. Kenny or Pennington will play with passion if selected.Ron has to be able to get them properly prepared.

Chris Williams
8 Posted 31/03/2017 at 16:38:37
Schneiderlin has very quickly become a major player for us. A proper thoroughbred with class, strength and time to spare – always a good sign.

He will be missed, but we need to adapt and to believe in ourselves. We can beat these with the proper set-up and tactics and with heart.

Could do with a decent performance from the ref too. Sky showed some stats today that showed we've had 14 reds against 7 for them since last we beat them there, which is a nonsense.

I know who I would or wouldn't play, but I'm just a fan, and I suspect the team-sheet will reveal a lot about the managers mindset for tomorrow's game.

It all hinges on our front 3 for me. If they are anonymous, I expect another white-flag performance. If they can get hold of the ball and play a bit, though, then that's quite a solid team we have got. Fingers crossed.

One of the oldest sayings in Football – We go with what we've got.

I wouldn't stray too far from Danny's team. I also agree that the three non-defensive players will have to be right at the top of their game; we cannot afford the big fella to get isolated. He must be supported

Keep 11 on the pitch and we can do these.

Still nervous as heck, but I wouldn't imagine a repeat of the first half vs Spurs. That was frightening.

So long as Koeman's tactics are to win rather than contain, we can dominate the midfield. They are fragile, weak in defence, and are now struggling with Klopp's pressing game. Player for player, we are superior.

The facts relating to the 'here and now' speak for themselves. We are the in-form side, and can win this comfortably. It's been a while since I've been able to say that! We should forget the history of derbies, that's the past, we should focus on the 'now'.

Strong fair ref needed. We should be so lucky.

Peter Roberts
20 Posted 31/03/2017 at 18:32:29
Ref tomorrow is Anthony Taylor. Not as bad as others but no doubt there'll be a lot of pressure on him from the other side with him being from Greater Manchester.
Tom Bowers
21 Posted 31/03/2017 at 18:33:56
Seems always that we make excuses even before a ball is kicked but fair to say this last couple of weeks has been a nightmare with key players out and two of them, Morgan and Seamus, playing brilliantly.

A big ask to beat the RS but given an intense team effort, the run of the ball and a fair referee they have a chance if only because they have been average in a few home games this year and their defence can be got at.

Everton cannot afford to start badly and concede a goal early to have any chance.

But, then again, teams that play counter-attack football do well. Who would be a manager, eh?

Morgan a big loss, as is Seamus, but let's lose the inferiority complex and have a bit of a go.

Agree with the team except Mirallas for Valencia.

Oh well... Gaz Baz it is; hopefully he won't pick up a stupid yellow card in the 1st 10 minutes.

Rob Halligan
29 Posted 31/03/2017 at 19:44:59
Schneiderlin has not yet been ruled out tomorrow. Was speaking to a member of the backroom staff tonight, who informs me Schneiderlin is to have a fitness test tomorrow.
Graham Hammond
30 Posted 31/03/2017 at 19:51:50
As John Raftery (#12) correctly pointed out, Morgan was never going to play tomorrow if he pulled his calf a fortnight ago. Three weeks with a calf is a big risk so I do not expect him to feature against Leicester but expect him to be okay for Burnley the following weekend.

We needed him tomorrow but these things always happen prior to a Merseyside derby. I am not a fan of McCarthy, all considered, but with Schneiderlin out, we could have done with James fit and in the mix. We will see where Macca is at soon enough.

I hope Mirallas starts as he generally performs well in the big games. Let's hope the lads tomorrow all WANT IT BADLY and BELIEVE!

Peter Howard
31 Posted 31/03/2017 at 19:52:22
I put Sky Sports News on this morning and the headline was that Klopp was annoyed with England playing a friendly in the run up to the derby.

They went on to report that Klopp's plans for the game had been thrown into chaos because of Adam (I can run all day) Lallana's injury!

Perhaps he's getting his excuse in early.

Ron was pretty adamant in the press conference that he wouldn't be available for the next two. I don't think he's the type to rush players back and risk further breakdowns.

Rob Halligan
33 Posted 31/03/2017 at 20:20:44
Only saying what I've been told, Chris. My source is a part of the medical team who has been treating Schneiderlin today. He looked confused when I said he'd been ruled out.

He is due a fitness test in the morning, and may or may not make it. Just hasn't definitely been ruled out.

The stats and TV coverage of the build up are all siding on the usual RS victory, but if we go with what we've got available, you never know! We've got local lads in the team in Baines, Barkley and Davies, the RS have got none. Even Radio Merseyside were clutching at straws saying they had a Welsh lad from Nottingham who has been with their academy since he was a kid so technically, he could be local... really!!

For the first time in a long time, I would say it's evenly poised. We've got a couple of good players missing, they have got the Llama missing and that kid who runs funny and wears their captains armband.

We should have a couple of players in Rom and Ross looking to show everyone how good they are. Ross, for his latest snub by England and Rom, to impress his potential CL suitors.

If we can do what we did to Arsenal and bully them all over the pitch, force them to make mistakes and keep Mane quiet, again, you never know!

Me and my son are season ticket holders in the Park End and as he is only 12, he has never seen us win over there. I've seen the Sharp derby, the Ratcliffe derby, the Kanchelskis derby (couldn't get a ticket for the Campbell derby), so I have had to try to explain what the feeling is like coming out of their place with a win (Goodison looks fantastic when you walk across Stanley Park after a win in the derby)!! I

never have a good feeling leading up to the derby and as I don't have a ticket, I am hoping I wake up at 3 o'clock tomorrow and we have won 1-0 and scored a 99th minute fluke winner off a big blue beachball! COYB

If so, cross your fingers for me at kick-off and we will win 3-1.

If we exploit and give Rom the ammo, we can give them the hammer!

Graham Hammond
40 Posted 31/03/2017 at 00:10:40
Interesting stuff regarding Schneiderlin, if he really is having a fitness test in the morning then I would imagine he will be given the go-ahead to play and it would all point to the fact he only felt a minor twinge in his calf.

If he pulled the calf a fortnight ago (as appeared to be the case) then I would be truly amazed if he is considered and was even on the bench.

I am worried about our defensive capabilities going into the game. Make a bit of history, lads – it might even keep Lukaku happy!

Disappointed about Schneiderlin but Barry is a true professional with a good passing range and great positional sense. Gana and Davies can do the pace work.

Barkley and Mirallas have to set him up to run at the RS defence. If they do he will rip them apart.

Rob Halligan mentioned it. I was in the front row behind the goal. Another derby, another defeat.

Watched it from behind the couch here. Really felt for the fans – yet another gubbing at Mordor... frustrated, sad, angry – bet you went through the whole plethora of emotions and I feel for you having to suffer the walk out of that stadium and then home. I forgot to ask when we were in the Crow's Nest a couple of years ago, do you speak Norwegian, John? Can you understand their hurdy-gurdy-wurdy taunts? :)