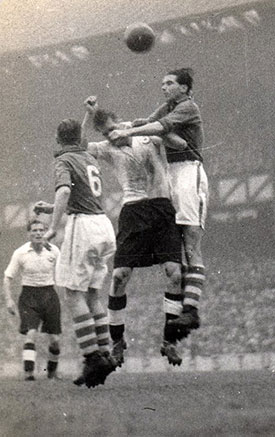 T.G.- Jones in action for Everton, post-war
Care of Brendan-Connolly

12 October 2017 marks the centenary of the birth of Thomas George Ronald Jones in Queensferry, Flintshire. The tall, quiet son of a Connah’s Quay coal merchant would find his footballing feet at Wrexham F.C. but he would achieve immortality at Goodison Park. His first two initials, T.G. became synonymous with the art of cultured defensive play.


In March 1936 the footballing eye of Toffees director Jack Sharp - himself a playing great – recognised the promise in the leggy teenage centre-half. In no time T.G. had swapped The Racecourse Ground for Goodison but the callow youth initially struggled on Merseyside. Only upon returning to live just across the Welsh border did he settle and secure his place in the Everton first eleven, at the expense of Charlie Gee.

Goodison Park had never seen anything quite like T.G. – here was a centre-half who could deal with the physicality of rough-house centre-forwards without getting his kit dirty. Intelligence and impeccable timing – not to mention self-confidence – allowed him to be in the right place, at the right time, to break up opposition offensives. But there was so much more to him than that. Dominant in the air, he could also dribble and distribute the ball to the forward line and, according to Joe Mercer, he had the hardest shot in the business.

Alongside Mercer and Jock Thomson in the half-back line, he provided the base for Everton’s surprise title bid in the 1938/39 season. With Ted Sagar behind him and his close buddy, Tommy Lawton ahead of him. T.G. strolled around the pitch – by his own admission sometimes not even breaking sweat. Dixie Dean, who rated T.G. as be the most complete footballer he had ever seen, commented, “He seemed to be asleep half the time. The point was, though, that even when he was asleep he played better than anybody else on the field.” 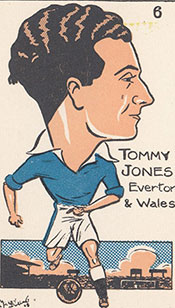 With the 1938/39 title in the bag, even greater things seemingly beckoned at club and country level, however the outbreak of war robbed T.G. of seven of his prime years of competitive football. When peacetime league football resumed in 1946 T.G. was still struggling with a serious ankle injury sustained in a wartime derby match. Becoming frustrated about the lack of ambition demonstrated by the club, with Lawton and Mercer having departed, T.G. sought fresh pastures. Much to his chagrin, interest from Arsenal, Chelsea and Manchester United, amongst others, was rebuffed by the directorate. In spite not even being guaranteed a place in the first team – fellow Welshman Jack Humphreys often getting the nod, T.G. remained a terrace idol. The supporters adored his regal demeanour on the pitch and audacity in dribbling in his own penalty area. In spite of myriad transfer requests, his desire to leave Everton was tempered by his deep-seated affection for the club and its loyal following. Years later he confided to author Rogan Taylor: “I loved Everton, but they never loved me very much.”

When a move to A.S. Roma collapsed in 1948 over currency complications, T.G. buckled down under new manager (and former teammate) Cliff Britton and proceeded to roll back the years. The reward for his excellent form and leadership was the club captaincy for the 1949/50 campaign. Alas, the relationship between manager and the increasingly headstrong centre-half soon broke down irrevocably and, by the turn of the year, T.G. was in exile.

Although still in the Welsh set-up he was not even guaranteed a place in the Blues’ reserve team. His response was to turn his back on Everton and English football – accepting a lucrative offer to manage a Pwllheli hotel. He was not finished with football, however and led both Pwllheli FC and Bangor City to unimagined heights in the 1950s and 1960s. Most famously he plotted the near miraculous encounters with Napoli in the 1962/63 European Cup Winners Cup – taking the wealthy Italians to a replay at Highbury. 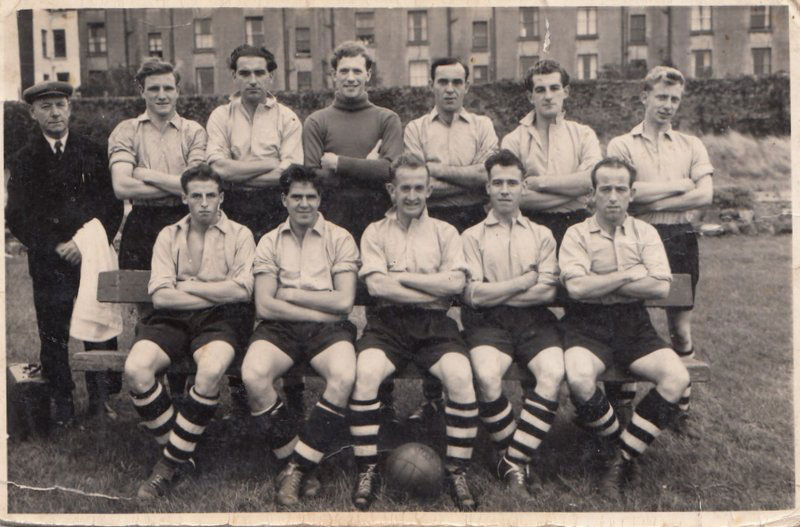 In retirement, as a newsagent in Bangor, T.G. could never quite bring himself to forgive Everton’s directorate for the bitter end to his time there – nor for choosing Ian Buchan over him to become the Toffees’ coach in 1956. It was a great pity that, in January 2000, he felt unable, or unwilling, to attend Goodison Park to be presented to the crowd as one the first Everton Giants. As the last surviving team member of Everton’s “Boys of ’39”, he passed away four years later. However his name and reputation lives on – he remains the benchmark by which Everton central defenders are measured.

Further reading:
The Prince of Centre-Halves: The Life of Tommy ‘T.G.’ Jones by Rob Sawyer is available from deCoubertin Books

"Sagar used to go mad at him, screaming to get shut. TG would bring the ball down in the box and dribble his way out. The best centre-half who ever played the game."

Jack Convery
4 Posted 12/10/2017 at 20:02:40
Good article. We all miss seeing the true greats as YouTube arrived years too late – what a pity. Imagine being able to see the likes of TG and Dixie. Now they would be YouTube highlights that would not just last a mere few minutes.
Dave Abrahams
5 Posted 12/10/2017 at 20:16:00
Jack (#4), yes to see the really great players in action would be brilliant. I saw TG as a very young boy and it was a treat; everything he did was done in a calm measured manner. It was just magic to watch him and, although I saw him through the eyes of a very young boy, I'm sure he was as good as I thought he was, but no words can show his brilliance. TG in action would do exactly that.
Rick Tarleton
6 Posted 13/10/2017 at 09:46:35
He retired just before I became interested, but all the older Evertonians spoke in awe of his footballing skills, so unusual in a centre-half at that time.

I did not realise that he felt so badly about the way Everton treated him. There's probably a long list who feel the same – including Ross Barkley.

I wonder, if he had become the coach/manager of Everton...

He must have been good.

Wherever it may be!