At the age of 30, John Goudie was the eldest of the several Scottish players who joined Everton during the Autumn of 1887. He was a plumber by trade and, more than likely, quickly found employment on the house-building project that the club president was undertaking at the time.

Goudie was born on 5 July 1857 at 4 Wardrop Street in the Renfrewshire town of Paisley, to James, a dye works clerk, and his wife, Catherine. On leaving school, he began his apprenticeship and spent his leisure time playing football with a group of friends on East Park where, in 1877, he became a founder member of Abercorn Football Club. They later moved to Blackstoun Park, from where they created a great rivalry with local neighbours, St Mirren.

Goudie first came to public notice when, on 6 January 1883, he was selected to play for the Scotch Counties in a trial game at Blackstoun Park. The home side was made up of players based in the counties of Dumbarton and Renfrew while their opponents were all members of the Glasgow FA. Later that evening, at the George Hotel in Paisley, Goudie was not selected to play for the Scotch Counties side that would oppose the Lancashire FA at Darwen.

His play however, remained consistent and this led to him gaining his only international cap when he represented Scotland against Ireland in the home of Ulster FC at Ballynafeigh in Belfast. The dreadful conditions in which the match was played were best described by a journalist who accompanied the visiting side…

Unfortunately, the weather was in the highest degree, unfavourable. During the entire forenoon, rain and snow had fallen. Alternately, as the afternoon approached, a gale continued to blow and continued to increase in violence. The ground was in a very soft condition and about mid-day it was a miniature lake. Notwithstanding the state of the weather, there was a large number of spectators. (Glasgow Evening Times, 28 January 1884.)

The appalling conditions, however, did not seem to dampen the performance of the Scots as Goudie scored one of the goals in their 5-0 victory. In the summer of 1887, he joined Everton.

The Scot made his debut on 3 September 1887 and scored one of the goals in a 5-0 win over Bury at Anfield. He then took part in all four of the FA Cup games that were required and scored one of the goals that saw Everton register the famous victory over Bolton Wanderers. Goudie then took part in round two that saw Everton knocked out of the contest by Preston North End, before returning home after they were suspended by the FA on a charge of “professionalism”. There was, momentarily, a mention that he might play again at Anfield but this did not materialise and he returned to the family home at Wardrop Street in Paisley.

John Goudie was resident at this address when he married Mary McLachlan at the Clerk Lower Hall in Paisley on 5 February 1891. His new bride, who was now living in Paisley, had been born at Ballerat, in the Australian state of Victoria. (Marriage by declaration was a form of irregular marriage recognised in Scotland until 1941. A couple simply had to declare before a witness that they were married from that time on. Evidence that they had done this was then taken to a Sheriff Court for registration.) The 1901 census finds the couple were living at 39 Mill Street in Paisley and had three children. Goudie had gone into the plumbing business with a former Abercorn teammate, Archibald Hunter, and they had premises at 5 Causeyside Street in Paisley. 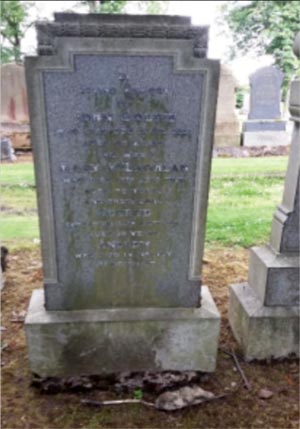 An active sportsman, John had now become a member of both the local Priors Croft Bowls Club and the Old Ranfurly Golf Club at Bridge of Weir. The family later moved to 15 Greenshaw Avenue and it was from this address that the head of the household set off for his golf club on 23 April, 1921 and arrived back at Paisley Railway Station later that afternoon. He then boarded a tram car and suddenly became very ill. His fellow passengers then conveyed him to a local doctor who, after examination, pronounced him dead due to Heart Failure.

John Goudie, who left a wife and family, was buried at Hawkhead Cemetery in Paisley and his headstone is featured here.


Michael Kenrick
1 Posted 25/03/2018 at 21:53:58
So, begging the question, perhaps, was Goudie one of the first professionals that got Everton into hot water for those FA Cup games?

According to our history pages, the four 'famous' FA Cup 1st Round games against Bolton Wanderers in 1887-88 were (Everton's score first):

Our records say that Everton were disqualified for fielding seven professional players. But that was not before Everton went on to face the mighty Preston North End in Round Two of the FA Cup that year.

Seemingly, the row over player eligibility had something to do with Goudie's spell at Everton being so short?