08/05/2018  |  Jump to last
Share:
Evertonians can be accused of harking back to an illustrious past rather than thinking forward to securing a glorious future. There may be some merit in that argument but, on the other hand, the standards set in the past should be used to inspire us going forward, in the spirit of the club’s motto.

The bar has never been set higher than in the glorious 1927-28 title-winning season, when William Ralph “Dixie” Dean (just plain “Bill” to his friends) achieved the mind-bending feat of scoring 60 league goals (in all he scored 63 league and cup goals in 41 club appearances). To celebrate the 90th anniversary of the last-day feat of scoring a hat-trick against Arsenal to reach the landmark figure, Blues of all ages gathered at the People’s Club Lounge in Park End stand (the end at which Dixie grabbed his 60th goal – typically a header from a corner).

The event was the brainchild of EFC Heritage Society member, and former Liverpool Echo Sports Editor, Ken Rogers who acted as a superb MC. He was ably assisted in planning and executing this night to remember by other Society members. After an introduction from EFC Heritage Society chairman, Bren Connolly, the assembled audience was treated to a performance by Gerry Murphy of his composition, “The Ballad of Dixie Dean”. It may have been my imagination but I think I saw a few watery eyes in the house as the poignant lyrics sank in. 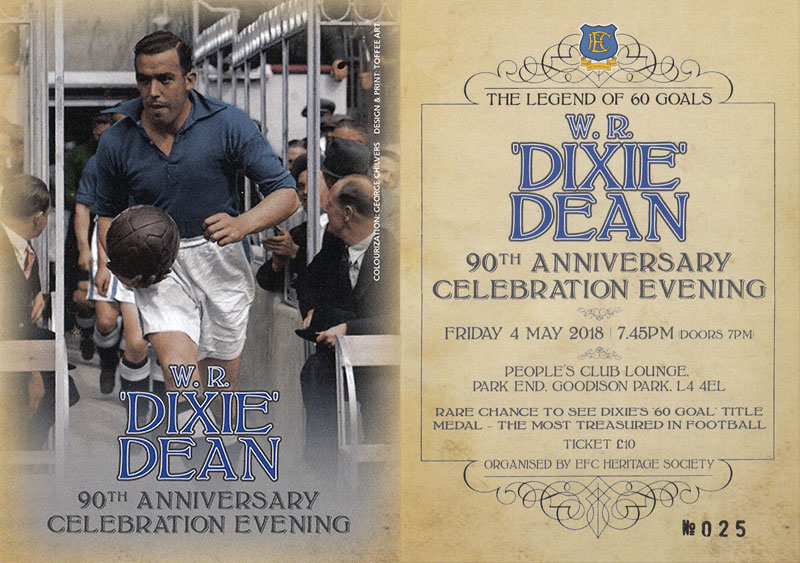 Anecdotes from Dixie’s life and times were shared by Ken – including a hilarious one involving a dispute about the size of ball to be used in a tour match in Dresden (suffice to say that Dixie won the argument ). Then there was the race against time, with Dixie’s goal tally at 57 goals, to be for fit for the Arsenal game. Club trainer, Harry Cooke, moved in with the Deans to administer treatment to the damaged thigh muscle, day and night. The hard work paid off when Dixie declared himself fit on the morning of the match.

Three generations of the Dean family were present as honoured guests: Bill’s daughter, Barbara, his granddaughter, Melanie and great-grandchildren Scarlett and Daniel. All four took to the stage emphasise their pride at being related to the great man. At 91 years young, Billy Ingham (of Barclays TV advert fame) was the sole attendee to have first-hand recollections of watching the King of Goal Scorers play for the Blues. He was spotted having an in-depth chat with Barbara during the interval.

Billy Ingham of the Barclays ad fame and first-hand witness to Dean's greatness, chats with the goalscoring legend's daughter, Barbara and his great-grandson, Daniel; Ken Rogers on stage with Barbara

The Dixie Dean Memorial Award trophy (in recognition of services to football in the finest tradition) was presented by Dave Prentice to Graeme Sharp (the second time that he has been a recipient). Sharp, Derek Mountfield, Mike Lyons and Ronny Goodlass all told the audience what Everton, and Dixie Dean, meant to them.

To round off the evening, Gordon Wallis, who had been tracked down by “Blue Bloodhound”, Ken Rogers gave an address about his life as a sports memorabilia collector. He brought with him Dixie’s 1927-28 Championship medal, which he purchased for a record sum at auction in 1991. He hinted that this jewel in the crown of Evertonia could return to Merseyside on a more permanent basis – if Everton are able to deliver a fitting home for it in the shape of a museum in the new stadium development. He also implored the club the strain every sinew to secure some of Joe Mercer’s artefacts when they come up for auction shortly. The evening ended with people crowding round to be photographed holding the treasured 1927-28 medal.

Great article but I thought he scored over 80 goals in all competitions that year.

Wasn't he nearly a goal a game for Everton and England?

I would settle for just his heading ability in the current team.

Phil (Kelsall) Roberts
3 Posted 08/05/2018 at 11:06:14
Can we do this every year?
Jay Wood
[BRZ]
4 Posted 08/05/2018 at 12:52:33
As someone who recently posted on Lyndon's piece 'Our Rightful Place' that we cannot return to the 'top table' of English football on sentiment and history alone, only on merit by our efforts both on and off the pitch, that does not mean I turn my back totally on our considerable and prestigious history.

Gerry's detailed listing of Dixie's 85 goals in a single calender year - EIGHTY-FIVE FRIGGING GOALS! BY ONE PLAYER! - is eye-popping.

Out of interest, back there in the UK, did any of the footy TV or radio channels and programs do a piece on this noteworthy landmark in the English game..?

I know what my guess is, but maybe one of them did. I'd be interested to know.

Jay Harris
5 Posted 08/05/2018 at 16:12:29
Thanks for that research Gerry,
It highlights what a unique and special talent he was and all that while travelling by bus to the game and having a few pints during the week, not to mention the old caseys that the modern beach balls have now replaced.

Steve Carter
6 Posted 08/05/2018 at 22:24:41
Interesting to read of the attendance of Mike Lyons, my boyhood fave. He lived in Australia for decades. Has he moved back to Liverpool?
Rick Tarleton
7 Posted 09/05/2018 at 10:29:58
And I actually met him. My dad was Nel Tarleton's brother and knew Dean and although all the Tarletons except me were reds,he took me to meet Dean in "The Dublin Packet". Dean was a lovely, modest man who spoke admiringly of Alex Young. At the time I was eighteen I rather took the meeting for granted, now at seventy-one it is a treasured memory.