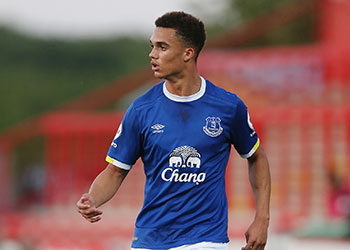 Everton have signed Antonee Robinson to a new two-year deal as he bids to make the breakthrough to the first team.

The young left back, for whom many at the club have high hopes as a long-term successor to Leighton Baines, put pen to paper on his latest professional deal and expressed his desire to make his full Blues debut this season.

“I'm buzzing," he told evertontv. "I've been at Everton for eight years now and just delighted to keep that going.

"This is the longest professional contract I've signed. I'm looking to kick on and keep improving as a player, knowing that my future is here.

“I feel like I need first-team football this coming season, whether I impress during pre-season and stay here or end up going on out on loan somewhere. I feel like I did quite well last season, played most of the games and that is the next step for me now.

“Every pre-season is extremely important because it sets you up for the year. You don't want to miss a session and fall behind everyone else."

Robinson, 19, has been with Everton for eight years now and was an important member of the Under-18s team that won the Dallas Cup last year and helped the Under-23s to the Premier League 2 title this past season.

The Milton Keynes-born defender, nicknamed "Jedi" and who has represented the United States at youth level, won the Under-18s Players' Player of the Season award two years ago.


Mike Gaynes
1 Posted 06/07/2017 at 15:54:25
The opportunity is there for him right now. Baines needs a deputy and Galloway has been loaned out. If he can step up as Holgate has, he can secure a bright future and help the club immediately. Hope he gets the call for the friendly next week.
Roy Adams
2 Posted 06/07/2017 at 15:59:33
What happened to Garbutt?
Peter Gorman
3 Posted 06/07/2017 at 16:00:13
I knew nothing about his American connection but he is full of promise and is correct that he needs first team football soon, obviously on loan being the most likely means.

Think he had a bad injury a year or two ago but has come back well and played his part in the league win for the U23s. Hope he keeps developing, the injury would have taught him to take nothing for granted.

Funny how things turn out, don't they?

Big step up from ressie football to the first team especially for one so young, but he played impressively well in the U-23s success last season.

High octane player, both in defence and attack. I'd mark him down as a player with a genuine chance to break through the ranks.

Like others, surprised by mention of his American connection and heritage. Any of our American cousins able to shed more light on this?

Clive Rogers
10 Posted 06/07/2017 at 18:29:04
Garbutt got a ridiculous five year contract from Martinez, so could be hanging around for some time yet. He's still got longer to go than anyone else in the academy even though two years have gone. Shocking management.
Charlie Lloyd
11 Posted 06/07/2017 at 18:32:58
Big couple of seasons for Robinson to make the step up. I've seen him a few times play. He's mobile and quick with decent skill in the ball probably needs to tighten up defensively and work on his positioning. There is potential there but the Premier League is quite a step up.

As for Garbutt .that ship has sailed.

I did find some remarkable skills videos on YouTube. This kid is gifted.

He was out for a whole season, so that would explain his limited Academy experience. We first started tracking him in 2013-14 for the Under-18s but those stats unfortunately are incomplete. I guess he was only 16 then...

On a side-note, anyone aware of what happens to the Team Sheets that are provided to the referee before games in the Under-18s league? Do you think they are retained by the club? Get submitted to the League/FA? Or thrown in the can?

David Ellis
17 Posted 07/07/2017 at 03:38:05
Meanwhile apparently Newcastle have signed former rising Everton "star" Josef Yarney, a defender. Never heard of him. I guess he was buried under the wealth of talent we have at U23 level and below at Everton. Good to see the status gap between Everton and Newcastle so vividly underlined.
John Dean
18 Posted 07/07/2017 at 08:35:09
Garbutt is just one example illustrating the degree of difficulty in knowing which players will make it to the highest level.

Two years ago, Garbutt appeared to be stalling on signing a new contract to the annoyance of some who had championed him even over Baines.

Then, when Baines was injured towards the end of the season, Roberto Martinez handed a debut at left-back to Galloway and not Garbutt and I thought that sealed Garbutt's move to another club.

But then he signed for another five years at Everton and I don't remember anybody complaining at the time. His future is probably behind him now as he couldn't hold down starting places at either Fulham or Wigan but he could hit a ball sweetly.

First time I saw Robinson, a few years ago, waiting to come on as a sub, the other players are warming up and stretching and Robinson was ball juggling.