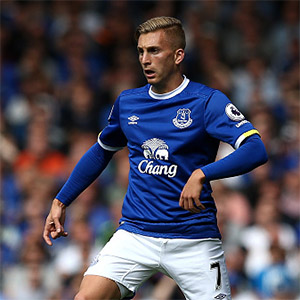 Barcelona have confirmed re-signing winger Gerard Deulofeu from Everton after exercising a buy-back clause believed to be worth €12m (£10.6m).

Deulofeu originally went on loan to Everton in 2013-14 then signed in a £4.3m permanent deal in 2015. The 23-year-old made 13 appearances for Everton last season before joining AC Milan on loan in January.

The Spaniard, who came through the youth academy at the Nou Camp, has signed a two-year deal. Under the terms of the original deal that brought him to Goodison Park from the Nou Camp, Barcelona are barred from selling Deulofeu for at least a year.

After a good first season on Merseyside, Deulofeu fell out of favour and manager Ronald Koeman allowed him to spend the second half of the last campaign in Italy.

He started 36 games for Everton, with a further 39 from the bench, scoring eight goals. His contract had been due to run until June 2018.

Deulofeu said: "I am very happy to have returned home and cannot wait to start this project. I have always wanted to be here.

"I have had to work away from Barca, because it is not easy to get into the first team, but I have come here with a lot of desire.

"I have changed a lot, I have had different experiences and I think I have improved as a person and a player. I am a different player and I am going to try and help the team.

"I know that competition is high, but I will work hard every day and I am going to try and learn from the best to help the team to win titles."