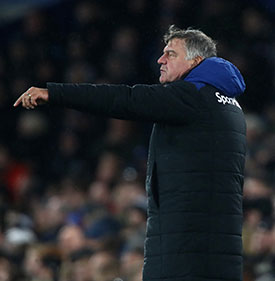 Sam Allardyce expressed his displeasure with the way Everton gave up the ball and then failed to contain Manchester United as Jose Mourinho's side ended a sequence of three successive draws with what ended up being a comfortable win at Goodison Park.

Cheap giveaways by Wayne Rooney and Mason Holgate handed the visitors opportunities to put pressure on the Blues' back line and first Anthony Martial and then Jessie Lingard capitalised on space on the edge of the box to sweep home similar shots from the edge of the penalty area.

“I don't dispute the result or that Man United are the better side but what I do dispute is that [their] goals weren't (sic) that great because of our deficiencies in the first goal," the manager said afterwards.

“We were negative in our response to Wayne giving the ball away instead of getting on the front foot and keeping Manchester United outside of our penalty box. We've allowed Martial to take a touch, look up and plant it right into the top corner.

"It's just not supposed to happen like that. The lads know better than to back off to your own box. We didn't lay a finger on any of their players from Wayne losing the ball in their half to five yards outside our box and them scoring.

“I can't accept that, as a defender. We should have held the 18-yard box, we should have then gone and pressed the ball, kept United away from our box and then I don't think they would have scored that goal."

Allardyce tried to get his team back into the game with a double change just past the hour mark and it eventually yielded a chance for Oumar Niasse which he headed wide but United eventually doubled their lead.

“I think James McCarthy showed the rest of the lads what we needed to do and that was to close Man United down again and we got a bit of momentum going," Allardyce explained.

“But the second goal was a lot worse than anything we've done for a long time because they've scored off our throw-in. That, for me, is something that at this level I just can't accept.

“We've gifted United two opportunities to score today and you can't do that against [a team like that].”