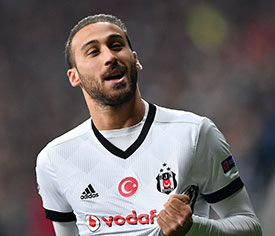 Updated Club officials have met with Besiktas president, Fikret Orman, in London and look to have agreed a fee of £27m for Cenk Tosun.

It appeared as though Orman drove a hard bargain as he used an apparent bid from China as leverage to get the asking price for his player.

The striker's move from the Turkish club was expected to be done, dusted and announced by today after he travelled to London for New Year's Eve but talks between the clubs stalled until Orman returned from a trip to South Africa.

The Besiktas head honcho denies he raised his price but he appears to have got Everton to meet his valuation without add-ons as part of the deal.

"Besiktas is a serious club, which goes according to international football rules," Orman said at a press conference where he unveiled new signing, Domagoj Vida.

"Everton have made an offer but China offered 35 million euros for Cenk Tosun. And we said no. He is a very valuable player for us.

"Cenk wants Everton. Negotiations are ongoing, with good intentions. "There is no finished situation right now. If the conditions are right for us, the transfer takes place."

While previous reports had suggested that the Blues had already bid that amount, subsequent claims by Paul Joyce in The Times pegged the offer at around €24m (£21.2m), with the remainder dependent on appearances.

Word emerged on Wednesday night from Turkish media sources that a deal had finally been concluded. Serdar Saridag at Milliyet.com.tr claimed that Besiktas had agreed an improved fee of €27m for Tosun, as did Ertan Süzgün while Firat Günayer reported that the final fee will be €28m with add-ons included.

The final agreed price rose to £27m this morning, however, when it was reported by Sky Sports and The Guardian, with the player scheduled to travel to Merseyside to conclude the transfer.

“A final deal has not been reached yet but we have an agreement over the price," Orman was quoted as saying. "The end is near. The transfer will be wrapped up by the weekend.”

That was echoed by Sam Allardyce who said: “Personal terms are the final stage. That might happen before the Cup tie, might even get him registered before then, but that will be tight. He wants to join us.”