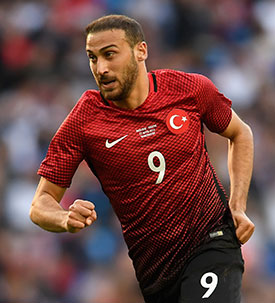 Updated Everton have completed a £22m deal for Cenk Tosun who becomes the first signing of Sam Allardyce's tenure.

The 26-year-old put pen to paper on a four-and-a-half-year contract at Finch Farm this afternoon but the protracted negotiations over the fee with Besiktas and then the player's personal terms means that he has not been registered in time to face Liverpool in the FA Cup this evening. Instead, his signing was announced at half-time of the cup tie.

Club officials met with Besiktas president Firkat Orman in London on Wednesday to hammer out an agreed price for Tosun and he travelled to Merseyside with his agent yesterday morning to undergo a medical and complete the formalities of the transfer.

The Blues agreed a £21m deal, with just shy of £1m clause-related add-one, in order to land a much-needed goalscorer whose registration was submitted in time for him to be eligible to face Liverpool in the FA Cup tomorrow evening.

Turkish media sources had pegged the final fee at €27m while reports in the English press quoted the same price but in Sterling but the figures released by Besiktas says that with a further €1.25m dependent on appearances and Everton qualifying for the Champions League, the move would only top out at around €24.5m.

“It feels great to be an Everton player,” Tosun told evertontv. “I'm really happy to be here and happy that everything is done. I'm really excited to play for Everton as soon as possible. Everton is a great club with a big history and a big culture and I'm looking forward to showing the fans the kind of player I am.

“I bring my skills here and everybody is going to see what kind of player I am. I believe I can be a good player in the Premier League for Everton."

Allardyce, meanwhile, hailed Tosun as the best striker in Europe for the money. He personally called the Turkish international to let him know how badly he wanted him to lead the Everton attack and was happy to see the club land his first target of the winter transfer window.

“This lad looks like he is strong mentally and has a good pedigree,” the manager said. “He is Turkey's No.1 striker and has scored goals in the Champions League and the Turkish League but he is desperate to play here in the Premier League.

“He is an all-rounder, with good movement. He is two-footed, perhaps not the biggest but he's very efficient in the air and in the box he gets good space to get his head on the ball.

“We looked at the qualities of the player, his talent and goalscoring, and his resilience, too. I do not think you can look any more than we have done and, for the price, he is the best in Europe at the moment.”

Born in Germany but of Turkish descent, Tosun elected to play for Turkey and ended up making his name in that country's Super Lig, having started his professional career at Eintracht Frankfurt.

He joined Gaziantepspor in 2011 and spent three seasons there racking up 39 goals in 109 league appearances before being picked up by Istanbul giants, Besiktas.

His game came on leaps and bounds with the Black Eagles where he notched 41 times in 96 league games while also lighting up the Champions League this season with a rocket of a goal that was named goal of the group stages.

Tosun's acquisition represents a belated striking signing to replace Romelu Lukaku who left Everton for a club record fee in July. In the interim, the Blues have had mostly relied on the precocious talents of Dominic Lewin but manager Allardyce has been keen to ease the burden on the 20-year-old's shoulders.