Coleman is back in training 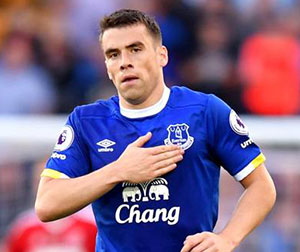 Seamus Coleman has resumed training with Everton's first team as he prepares for his much-anticipated return from a double leg fracture.

The fullback has been out of action since last March when he suffered the horrific injury on international duty for the Republic of Ireland against Wales but has been in light training for the past few weeks.

Manager Sam Allardyce revealed at last night's AGM, however, that Coleman is training again which could mean he will be available for selection before the end of the month.

It will be interesting to see if he comes straight back in; deposing Jonjoe; who, despite a nervous start has almost made the position his own.

Slightly off topic; but looking at some of the transfers we are getting linked with; it makes me laugh, when they are talking in the £30M bracket; and then go on to say, the player has been a total flop, since his high profile transfer to Club X!

If £30M is the going rate for flops; where does that leave us?

Kenny has done well but the side needs a fit Seamus; perhaps Kenny could get more time further forward and be back up for the right-back slot.

Seamus did an apprenticeship at right midfield so it wouldn't be bad for Jonjoe to do the same; it'll help his crossing and finishing no doubt.

Phil (Kelsall) Roberts
6 Posted 10/01/2018 at 10:12:35
Even though friends will say my command of English is not the best (O-Level Grade 4 back in 1973), can I point out that he has suffered a double fracture of the leg and not a double leg fracture. He broke both lower bones (tibia and fibula) in one leg, not a fracture both legs.

But glad to see him back training and I hope mentally he is also fit and not worried about it happening again.

We need to have patience though and he shouldn’t be rushed back in.

Kenny has performed really well and is getting more confident.

However, Seamus on form is who we want as his attacking flair has been sorely missed.

Hopefully he can regain the confidence he once had as injuries like he had can have consequences.

Brian Williams
14 Posted 10/01/2018 at 19:32:59
I just hope his first come-back appearance is at a home game. The reception he gets will be amazing!!
Gerry Ring
15 Posted 10/01/2018 at 19:36:00
We shouldn't underestimate the influence & passion that Coleman brings to Everton. Its not just his performances as an attacking fullback that he gives us but an infectious determination & commitment which is sadly lacking in a lot of our players. He won't accept anything less from others than what he gives to Everton himself & that's 100%.

A born leader & captain, all going well. Really hope as an Evertonian & more so, on a personal level for Seamus, that he picks up from where he left off.

Dermot Byrne
16 Posted 10/01/2018 at 19:44:44
Agree Gerry. Best captain we have and his spirit could get the best out of some we have who have been poor. Imagine Seamus telling Schneiderlin what is required!

Never spoke publicly but was reported to be devastated and phoned Coleman to apologize. (Not surprising, given that Taylor had his own leg broken in 2012.) Also reportedly tried to see him, arranged by Ashley Williams. No word on whether it actually happened.

Taylor apparently didn't learn his lessons very well, because he came in over the ball against Bolton's Le Fondre back in September and got another red and a three-match ban. But it was his first red in 176 career league appearances, so apparently he's not a habitual hack man.

His injury in particular has made me hate the other-worldly sport that is international football even more.

I thought it was just me.

I knew there was a it of a hoo-ha about it at the time and a lot of blues were baying for blood!

Regarding Neil Taylor, Have a look at his tackle on Kyle Walker a few seasons ago. More at home in a Bruce Lee movie. Nearly decapitated him! If I hear “Not that type of player” again I'll cry.

This guy has form & It does seem from video evidence that there was serious intent when he “took out” Seamus. Lucky for him that McCarthy wasn't playing that night!!

As some other posters have suggested, Coleman and Kenny together down the right hand side could be the solution initially. We would certainly be solid down that side with both of them playing.

Are they serious posts. Have you just been revived from a Dixon of Dock Green sketch or stuck in a time warp?

Not many times will the words, 'Comeuppance', 'assailant', 'hoo-hah' and a lot of Blues baying for blood be used on these pages.

Oh, and by the way, it's great that Coleman is on his way back... though I wouldn't expect too much from him this season.

Our season is over and better to slowly get him back for next season rather than push him for a few games in this meaningless season.

A couple of good defensive signings, a driving midfielder and we could be flying.

And if so, that must make him the most likely to move on, as we seem to sell all our best players.

Gerry Ring
39 Posted 11/01/2018 at 22:05:59
Kenny has done well but let's be honest, he's no Seamus Coleman. When he gets past the half way line he seems to lack confidence. He offers very little threat going forward & is a poor crosser of the ball.

Coleman takes watching & opens up space when we attack. We have sorely missed that extra attacking threat since he got injured, which makes us much more predictable.

Phil Lewis
40 Posted 12/01/2018 at 12:52:03
Coleman's was one of the worst breaks that I have ever seen.He has been sorely missed. I sincerely hope that the lad has made a complete and full recovery and experiences no problems, now back in full training.

Young Kenny has done very well, but is still learning his trade, whereas Seamus, as we all know was virtually the finished article. It is surely down to modern technology and advances made in surgery, that his career wasn't ended. It wasn't that long ago, that a player sustaining such injuries would undoubtedly be finished.

Full marks to the club, in these days of ruthless management, for showing loyalty to the player, by extending his contract considerably, while his recovery was still very much in the balance. I doubt many clubs would have made such a generous gesture.

The cynics might say it was simply a gamble, intended to keep him here. If that were true, then it was indeed still quite a risky deal. It is not just the healing of the injury to consider, but also any loss of pace and most importantly, his mental state. Such a traumatic injury often leaves mental scars, long after the physical ones have faded.

Let us all get behind Seamus when he returns, be patient with him, support him fully and don't expect immediate miracles. I wish him every success.

He knows the awful circumstances of the break and must have by now fully come to terms with what I would have thought was the most challenging part of it all: he broke his leg by kicking through the other player's leg as it came in over the ball, rather than the force of Taylor's direct lunge connecting side-on with Coleman's leg.

I hope he has not lost anything from his game, except the last year of inactivity, which must be the absolute worst thing for a professional footballer, something no amount of money can assuage.