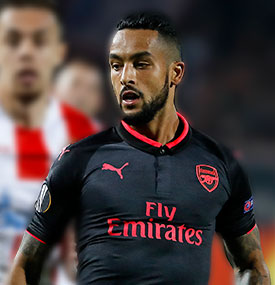 Sam Allardyce has admitted that he would like to see if Everton could get a deal done for Theo Walcott.

The Arsenal winger has been out of favour at The Emirates this season and has been the subject of reported interest from the Blues and his former club, Southampton.

Those media claims have suggested that Everton are better placed to match Walcott's £110,000-a-week wages and the Gunners' £20m asking price.

Allardyce was asked about the speculation during his press conference today and he confirmed the the club's desire to sign the 28-year-old, although he cautioned that no conclusion to the talks is imminent.

"You're all aware of our interest in Theo Walcott," the manager said. "If it's possible to get that over the line, I'll be delighted.

"Theo is not [a risk] because he's proven. He's scored over 100 goals for Arsenal from wide positions, plus assists. His pace is one of his key strengths which we lack in this squad. To add power in our goal scoring ability would be very important for me —- and he's only 28.

"Negotiations are happening at the moment and that can all be sorted out, which is one of the most difficult things to do today difficult, then that would be a great addition in my opinion."

Walcott scored 19 times last season but while he has yet to start a Premier League game for Arsenal this season, he remains an attacking option for Arsene Wenger at a time when Olivier Giroud is injured and there is uncertainty over the immediate future of Alexis Sanchez who is said to be wanted by both Manchester clubs.

“I've told Theo I'd like him to stay‚" Wenger said in his own presser. "I cannot give him assurances over game time because you just cannot do it — it's not honest.

"I have a good relationship with Theo and I don't want him to be frustrated or lose an opportunity to go to the World Cup because Theo went to the World Cup in Germany in 2006 and he has not been since for different reasons, so that is a sensitive subject.”