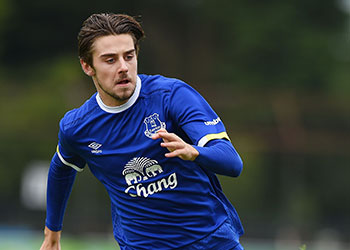 Everton Academy midfielder Antony Evans has signed a new contract that runs until 2020, the club have announced.

The 19-year-old has become an integral part of David Unsworth's Under-23s this season, and has hit the net three times since the turn of the year.

He was made captain of the side at Barnsley last week, where he scored the only goal of the game, continuing his development as a hugely promising product of the Finch Farm Academy.

“Everton is a great club and I am delighted to sign for another couple of years,” he told evertontv.

“I wanted to get a foothold in the team [this season], kick on and get a contract. We have a new [first-team] manager and new ways, so it is an exciting time at the Club.

“Ultimately, I want to try to get in the first team, whether that is through going on loan again or staying with the Under-23s and continuing to perform consistently.”

Let's hope he can make the step up, in the not too distant future.

From what I've seen, Kieran still has better innate football skills, though.

Keith Harrison
5 Posted 20/02/2018 at 19:11:05
This kid is Ian Bishop to a tee. Cracking player, and still very young. More physical and pacier than Dowell, glad to see him given a new contract.
Dave Abrahams
6 Posted 20/02/2018 at 19:21:05
Antony seems to have found a big belief in himself. At 16 he was doing well and coaches at the club thought he had a very bright future ahead of him, scored regularly and good ball control.

A big lad and with time to grow further, big things were expected of him, then he seemed to stall, didn't improve as expected. But this season he has found his love of the game coming back.

He now wants the ball, goes looking for it and has scored and assisted in quite a few games and he has been rewarded with this new contract and can hopefully have a bright future in football with Everton. Well done, Antony, and good luck with your career.

Keith suggests Ian Bishop but, for me, each time I've seen him, he has reminded me of a young Steve McManaman. Looks a bit like him (scruffy longish hair, baggy socks hanging, needs to fill out a bit), but more importantly runs straight at you with the ball, can see a pass, and can stroke the ball into places that lesser players cant even see. In other words, Direct, and cultured.

Still, others have commented that he can drift in and out of games, but at 19 he is someone to be really hopeful for. If he can get game time next season with Tom Davies, Keiran Dowell, Mason, Ademola Lookman and Jonjoe Kenny, and get Beni Baningime back with the A team then exciting times.

Peter Gorman
9 Posted 20/02/2018 at 20:18:32
Many years ago Martinez banged on about this quality number 10 in the youth team and I thought it was Evans but most probably correctly guessed he meant Dowell.

The young Evans was a rangy little playmaker with a knack of ghosting into the box to score but at the tender age of 16 moved upfront as an all-out striker for the U23s (or U21s as they maybe were) where he initially banged in goal after goal.

Just as Dave says; went a little off the boil for a bit, don't think his stint upfront with Morecambe was very prolific though undoubtedly a great experience. In fact, Dave's post is a pretty brilliant summary of the kid so far.

Now he seems to have physically filled out and is back in the midfield pulling the strings as a Number 10 or cutting in from the wing (hey, if it's good enough for Sigurdsson). A very. very talented youngster who is becoming integral to the U23s – I totally get Bryan's McManaman comparison; I'd give anything for Evans to be as successful.

Joking aside, made up for this lad as based on the YouTube U23 footage, he looks decent. Surely a shoo-in for game time once Sam believes we are safe.

Ian Burns
13 Posted 21/02/2018 at 08:49:54
I haven't had the pleasure of seeing the young Evans play as yet, so I am grateful for the assessments and reports above. It looks as though I have something to look forward to!

Good luck Antony, wishing you nothing but the best.

Clive (#15), I think the player you speak of might be Fraser Hornby. He's a big imposing lad brilliant in the air. Hopefully he will push on as well. He played in Cyprus, when Lookman scored twice.