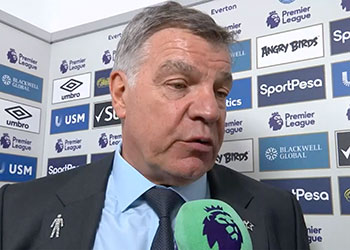 Sam Allardyce credited his players' effort and his own substitutions for putting Everton in the position to win the game against Liverpool yesterday, even if they couldn't quite manage it.

Having drawn 1-1 at Anfield in December, the Blues had to share the spoils in the Premier League derby for the second time this season after a goalless encounter at Goodison Park but they came close to winning it at the end.

After Loris Karius had pulled off a fingertip save to deny Yannick Bolasie and Jordan Pickford had denied Dominick Solanke and James Milner in the first half, Everton forced two good chances in the closing stages.

Unfortunately, Cenk Tosun's header searching for the inside of the far post was off target and fell just too far ahead of the lurking Seamus Coleman while Dominic Calvert-Lewin miscued a right-foot shot after Coleman had picked him out with a right-wing cross.

“When it comes that late in the game, yes,“ Allardyce said afterwards in reference to the feeling that the point gained should really have been three.

“Walking into the dressing room just now, [the players] are pretty disappointed they haven't achieved that for the fans and for themselves.

“They know they had that opportunity [to win it] and they worked very, very hard to create that opportunity today by doing the right things and continuing to press on and try and put Liverpool under pressure.

“That didn't happen on many occasions because of our sloppy passing but when we got substitutes on and fresh legs on we started to use the ball better, shut Liverpool down more and create chances.

“But it was a storming finish from the lads and a big, big effort by them. One of the reasons why we could have won it today was the way in which they restricted the number of chances they allowed Liverpool to create today, particularly in the second half.

“In the end, we got the chances to win but didn't. If fortune's in your favour, [the ball] either drops to Seamus Coleman or drops inside the post; if fortune's against you, it falls between the two and goes out.

“But we can't make any excuses for the next one. Poor old Dominic is really disappointed because he knows as a centre forward he should have finished it or, at the very least, hit the target.