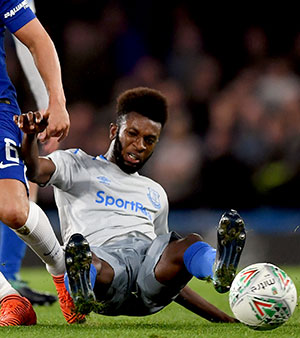 Beni Baningime has signed a new four-year contract that ties him to the Blues until the summer of 2022.

The 19-year-old broke into Everton's first-team this season and made an immediate impression during a difficult time for the club, going on to make 12 appearances so far under David Unsworth and Sam Allardyce.

Baningime, who joined Everton's Academy at the age of eight after moving to the United Kingdom from the Democratic Republic of Congo, agreed new terms today which improve the deal he signed last October which extended his stay at the time to 2019.

“I'm really happy to sign a new contract and so proud because it represents what I've always wanted, which is to be around the first team and fighting for my place,” Baningime told evertonfc.com.

“This Club means a lot to me because I've been here from a young age. It's where I want to be and I'm so thankful to everyone at the Club who has helped me get to this point.

“Hopefully this season is the first of many years of me being involved in the Everton first team.


Matthew Williams
1 Posted 03/05/2018 at 19:21:33
Good news,I like this lad,hope he has a very bright future in a decent Blues team lead by a new Gaffer with real vision & plays to win games & entertain the faithful.

Or did somebody else recommended this? Note that Sam didn't see fit to play this lad much.

Has the potential to be a Gueye who can pass well, which makes something like a Kante. Get anywhere near that level and i'll be happy.

He's the type of player who needs to be starting games and lowering the average age of the side.

Probably the brightest spot on an otherwise utterly dank and forgettable season.

Dave Abrahams
11 Posted 03/05/2018 at 20:44:02
So pleased for this young player, I remember him in a Youth FA cup match having to go off injured and banging the turf in frustration, he knew it was serious and might have been thinking he was going to lose a lot of time to impress in order to get a professional contract.

Well he's got a good long contract now and seems to be a lad who will make the most of it, good luck and good health in the future Beni, wishing a long happy successful career with the Blues.

Mike Gaynes
12 Posted 03/05/2018 at 20:49:29
Fine young player, great potential at 19, should be a more regular contributor next season if Schneiderlin is shipped. But he'll need to grow his game a bit at the attacking end if he's to secure a regular place. Right now his best hope is as Gana's deputy.
Ajay Gopal
13 Posted 03/05/2018 at 20:51:48
After many false dawns - about one of our own bursting out to be a superstar - Barkley, Rodwell, Walsh,Green, etc, I refuse to get excited. Although secretly would be hoping that ‘this guy is the one’.
Andrew Merrick
14 Posted 03/05/2018 at 20:51:49
Nice to see the club value this young talent. Not seen a lot of him, but he seems to want the ball and looks comfortable in possession. He looks up and uses space well, a real prospect...
Peter Lee
15 Posted 03/05/2018 at 21:14:53
As far as I can recall, SA has spoken twice about Beni, both positively. But hey, don't pass up another chance to turn good news into another moan.

We desperately need a strong central MF player who can break up play and carry the ball past the oppo over the first ten yards. Strength and pace. Beni isn't there yet and is unlikely to get many starts next season whoever isthe manager. A carefully selected loan is called for in my view.

I've got to be honest here: What I've seen of him, he doesn't look anything special – just another average midfielder to go with the other few hundred currently occupying our shit squad.

We're clutching at straws hoping he's going to be a world-beater. Yes, he may turn out to be a good player the likelihood is he 'll turn out to be just okay, nothing special... By god, we are quick to hand out long-term contracts to ordinary players .

I think the other comment was in response to press conference question pre-game. Best I can do.

Ship out Robles, Stekelenburg, Williams, Garbutt, Galloway, Martina, Funes Mori, Klaassen, Schneiderlin, Mirallas, Vlasic & Ramirez for as much as you can get.

I'd then pick up some of the better players from the relegated teams at reasonable prices – Butland, Jonny Evans, Bertrand, Shaqiri & spend a few quid on Batshuayi.

I wouldn't go on another big spending spree. Better to allow the players here to bed in properly. This season has seen too much chopping & changing under three managers, especially our defense under Koeman. We need a bit of stability now & a recognized first eleven with some competition from the youngsters.

My fantasy football squad next season based on a restrained spend would be:

We have been more consistent since Allardyce settled on a first choice first team. Yes, the football has been poor, but we've ground out results. Whoever the manager, we should continue this policy. The football will begin to improve as we pick up points on a more regular basis & the team gets used to each other & the system properly. We can then look at strengthening in key positions the season after. I fear that another summer of big spending will lead to more disruption, especially if we don't downsize. It can't be good to have so many frustrated players hanging around.

Of course, none of this will happen & people will accuse me of not being ambitious enough, but right now I think we need a calm and methodical approach to getting back on track over several seasons, not knee-jerk signings to try & buy our way out of a bad situation. The new manager will be key. I would love a Wenger or Fonseca, but Silva would do the job.

Justin Doone
25 Posted 04/05/2018 at 15:02:31
Happy for him but I'd only class Beni as decent. He's no better than midfielders we have and no particular stand out position or type of midfielder.

There are no major weaknesses, maybe too easy to shrug off and go past but at his age strength and power should develop in the next few years.

But he's no particular strengths and reminds me of Rodwell. His strength was in his own head, maturity, keep calm, keep it simple. Know your limits, don't dwell on the ball and look to switch it left to right quickly.

I'd much rather a Davies and Dowell combo who both have more talent but its all about developing their ability, potential, positive attitude to suit the team and manager.

However... McCarthy career is all but over. Had great energy and attitude to make up for Barry's lack of mobility but he never improved his tackling, marking, positional sense or passing. Get fit and sell him on. Another injury wreck like Gibson.

He should tell Keane and O'Neil where to go. He needs to retire or be excused from international games for a season to give him a chance of extending his career. Just not with us.

Besic, I really rated him but his weakness was his head. Loose cannon who tried to overplay far too often when last man. That lack of maturity coupled with his own injury nightmare makes it hard to relay on him and therefore should be sold too.

Schnides I've watched closely. I'm not convinced that he's improved and generally not good enough. Poor attitude, jogs back, too reactive, gives the ball away needlessly and is as solid as a chocolate fire guard. Sell.

Steve Ferns
26 Posted 04/05/2018 at 15:17:14
I think you’re a bit harsh there Justin. The lad is a good tackler. Unsworth said he “loves a tackle” and it shows. That first tackle in the Chelsea game where he smashes Luis and wins the ball leaving the Brazilian international on the floor and then took it around the next guy. This shows what he’s about.

Strong tackling, good ball skills, decent passing, good reading of the play, holds position well. He could be better than Gueye with more to his game.

He is a great reader of the game and is clearly unfazed by any opposition - these are pretty decent strengths to have.

Give these players a fucking chance...please.

The chance to get steamrollered by a Soton team desperate for points.

Do you actually think these things through rather than run on emotion?

You might try one. In a rare case you might try two such changes. If you really want to make sure that none of them get a chance to show you'd make three.

I want to see Everton win this game as I do every week. To do that you play the best eleven you can to achieve it. Like it or not that means controlling the game, stopping the opposition scoring and scoring yourself. Those three together couldn't control traffic, couldn't stop a pig in a back entry and, under pressure, would be more likely to pick the winning lottery numbers than a defence-splitting pass.

Matthew Williams
32 Posted 04/05/2018 at 22:43:20
I'm all for giving players a chance,if they don't play we'll never know...jeez,you could pick eleven fat lads out the crowd to combat the mighty Saints tomorrow,8th or 9th or 10th does it matter when our club is allergic to all things made of Silver.

Anyroad,even if we lose the game how many of the faithful will be left in the ground to see it happen !?.

Chad Schofield
33 Posted 04/05/2018 at 05:29:33
Great news about Beni. As to whether he'll set the world alight, it's early days and he is developing. People who expect young players to burst onto the scene, play 40÷ games and be amazing aren't realistic. The Maldini's/Rooney's/etc arr rarities.
Peter Gorman
34 Posted 05/05/2018 at 09:19:11
Peter Lee - I'm not advocating Klaasen or even the changes Matthew suggests but more arguing the principle.

You state that those three couldn't control traffic? well, I've not seen much traffic control from Bolasie and Schneiderlin so far this season (logically the two that Baningime and Vlasic would replace).

What I have seen from Baningime at least are performances against the likes of Chelsea where he was our best player on the pitch. So I don't know where your hyperbole about pigs and lottery numbers comes from.

In any case, I suspect very much Sam will opt for safety first, as pragmatic and lacking in vision as some fans want him to be.