Analysis of the proposed 52,000 capacity for Bramley-Moore, including season ticket pricing

On 20 December 2018, Everton put forward a proposal (not a decision), subject to further consultation and planning approval, to design and build the new Bramley-Moore Dock stadium with an initial capacity of 52,000.

I’ve plenty of reasons to disagree with the proposal but, for the purposes of this article, I’ll focus on the business case and the impact a smaller capacity has on ticket prices (particularly season tickets) in just ensuring we remain on par as far as match ay revenues are concerned, after financing costs.

The justification for this decision was cited by Colin Chong (Stadium Development Director) as “It is commercially and financially sustainable”.

The club also offered the potential for the capacity to rise to 62,000 although with the huge caveat: “It is not possible to say if and when any capacity expansion to an absolute maximum of 62,000 would take place”.

Therefore, from an analytical perspective, this is no more than a wish, an expression of what is theoretically possible... but, for those holding out the hope for a 62,000 capacity, let’s be clear: there are no defined plans to do so. As such, it does, however, demonstrate that the site could accommodate 62,000 and that there would be reasonable confidence of a successful planning application at that level.

Thus, if the business case supports a capacity anywhere between the two limits (52,000 and 62,000), then the size of the Bramley-Moore plot and the likely response of planners should no longer be reasons not to achieve a higher capacity.

In the simplest of terms, any business case for a capital investment looks at:

(i) The increase in demand required to meet the capacity of the new facility (be it a stadium, a form of transportation, or a manufacturing facility – the theory is identical);

(ii) The costs of building the facility, including the amount of capital required, the cost of that capital, and the ongoing maintenance of the asset, once built.

There are, of course, many other factors – not least including the macro-economic conditions and the competitive environment the business finds itself in, and how it must respond to maintain or improve its position relative to its peers.

The primary reason for any capital investment is ultimately to generate sufficient revenue to (i) meet the cost of the investment, and (ii) generate significant additional revenues for use by the business or shareholders as appropriate.

So, enough of the theory; let’s look at some numbers, starting with the cost of the stadium and the capital required to build it:

Costs, capital required and likely costs of that capital

It appears to have become the accepted wisdom that building a stadium at Bramley-Moore Dock will cost north of £500 million. This seems an extra-ordinary figure for a 52,000 seat stadium but there are special circumstances relating to the location. The site and ground preparation costs are known to be expensive, given the nature of the existing dock and the heritage considerations on such a sensitive site.

It is thought that the preparation costs are in the region of £120 million, leaving £380+ million to build an iconic stadium housing 52,000 fans with the theoretical ability to expand to 62,000. That equates to more than £7,000 a seat which, I am told, is at the higher end of the scale for building football stadiums (especially as preparation costs are stripped out of this figure).

I am also told that building with an initial capacity of 60,000 or above places a disproportionate level of additional costs on the additional seats – more on that later, but I think that is a false argument when the benefit of a greater capacity is looked at in its entirety.

Using the £500 million figure, how much is likely to be borrowed and at what cost? Not being party to the discussions, it is impossible to give a precise figure but borrowings of at least £300 million should be expected. The cost of those borrowings are again confidential but an estimate of 5.25% should not be considered unreasonable.

Bearing in mind one of the primary reasons for building a new stadium is to increase the revenues available to the football team, it’s worth considering the possible repayment costs. There are a range of values depending upon how much is borrowed and at what cost. I’ll be using £300 million at 5.25% as a base case but will show other values also:

So, going with the above calculations, I’m assuming capital and interest repayments of £19.9 million a year with the above variations if the quantum and costs are different.

I constantly hear that matchday revenues are not important anymore because of the huge revenues from broadcasting. This is palpable nonsense. Non-broadcasting revenues (including matchday revenues) are the key differentiator between the largest clubs, middle-ranking clubs, and also-rans. 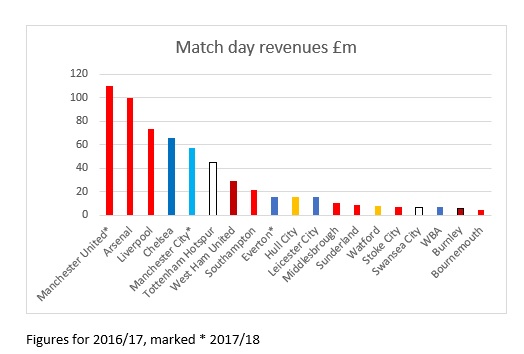 There are multiple factors for such a wide variation in matchday revenues from clubs competing in the same league. These include capacity, numbers and types of premium seating, numbers of season tickets, the pricing of season tickets, the pricing policy relating to different age categories (children, young adults, senior citizens etc), the price of walk-up tickets, and the competitive position of the club and location.

One of the interesting ways of comparing clubs’ pricing policies is breaking down the overall matchday income into income per spectator per match: 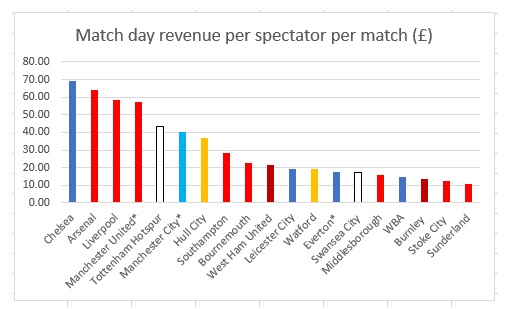 Everton have had an admirable policy of holding prices as low as possible (£17.64 (2017-18) per spectator per match versus Liverpool’s £58.64 (2016-17) for example, arguing that having a full stadium and attracting a younger fan base is a justifiable business decision given the capacity and condition of Goodison Park. It is also a result of the very low level of premium or hospitality seating available at Goodison Park (less than 4% of capacity) and the maximum number of season tickets sold under Premier league regulations. This is something I largely support, but how realistic is it in a new stadium with debt to be serviced and increased revenue expectations attached?

The policy of not increasing prices, maximising season ticket sales and concessionary bandings mean there has been no increase in overall matchday income since before 2010-11. From the public comments made by the club, with the desire to keep tickets affordable, it seems unlikely that there will be a significant uplift in the figures of the last decade whilst remaining at Goodison. This will need addressing to make Bramley-Moore, in Colin Chong’s words “commercially and financially sustainable”. 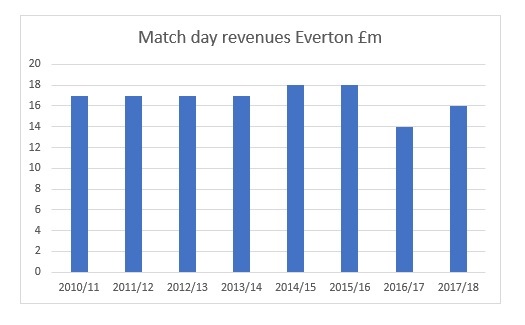 The requirement to increase net revenues from the new stadium

As expressed above, one of the key reasons for building a new stadium is to increase revenues available to the team.

How is this possible? Well firstly we have to look at the breakdown of types of fans attending a 52,000 capacity. I’d model that it looks something like:

I’m going to suggest, as in previous models, premium seats generate £175 per head (ex VAT), Away supporters £25 (ex VAT), and walk-up supporters an average of £40 (ex VAT) per head. That leaves season ticket holders who constitute the bulk of the home support.

By way of comparison, I estimate the current average season ticket price to be in the region of £270 (inclusive).

Now that is the average price, meaning it includes children, young adults and senior citizens – all of whom currently pay significantly less (from £95 to £299) than the full adult price (from £420 up to £560). It also only generates enough cash to keep us in the same net position as we currently are at Goodison Park.

Therefore it is clear that the capacity of 52,000, with a fairly low level (4,000) of premium seats, requires a significant increase in the price of season tickets across the board, including concessions, and a significant increase in walk-up ticket prices in order to generate reasonable cash levels over and above the debt service levels and the current revenues generated by Goodison Park.

In previous articles, I have modeled 60,000 as the ideal capacity at Bramley-Moore Dock. I appreciate entirely that that adds to the costs. It has been suggested to me that maybe as much as £80 million to the current budget for a 52,000 seater. I also understand entirely that the bulk (if not all) of that cost would come in the form of equity or other funding, not by a significant increase in debt.

However, the 60,000 capacity based on much bolder assumptions and expectations of demand would allow for a higher premium capacity; in my models, numbering 5,000.

The argument put to me against a 60,000 capacity is either cost, demand or a combination of the two.

On cost, I acknowledge there’s an additional capital cost, but I’d argue that’s countered by the benefit of much smaller required increase in ticket prices to fund the debt and provide income for the footballing side of the business, and an increased likelihood of full-capacity attendances, leading to future increased revenues over time.

I’d argue that this greater initial affordability increases the likely demand for tickets, a demand which on many occasions I have provided reasonable arguments based on evidence to suggest 60,000 is entirely achievable.

I’ve often talked about risk. To me, the lower capacity proposal is the highest risk option for the club. Why? Because it places a huge pressure on extremely high ticket price increases, thereby reducing demand due to affordability issues. It would be entirely inconsistent with the approach in recent years, as demonstrated above.

A 60,000-seat stadium, on the other hand, with a higher capacity premium seating area, and greater availability of walk-up seating, would continue to make season tickets relatively affordable – at least much more so than the lower capacity proposal.

I will return to the demand argument, and how to generate demand, in my next article.

The cost of servicing the debt associated with a new stadium places an increased cost burden on fans just to enable the club to stand still with regards to matchday income after costs.

The smaller the capacity and number of premium seat holders, the greater the increased cost burden on season ticket and regular ticket purchasers (walk-ups).

There is a compelling argument for demand for 60,000 initial capacity. That argument is strengthened by the additional affordability benefits of a larger capacity.

Sensible capital investments are about recognising the demand for an increase in capacity and ensuring that the income generated more than compensates for the cost of investment, all whilst not increasing the overall risks to the business.

From my perspective, and from the logic of this argument, that’s best achieved at a higher initial capacity – not a lower one.

With respect to the club and the major shareholder, the 52,000 capacity proposal is not the correct solution to maximising the benefits of Bramley-Moore Dock, and on the basis of fan affordability, it is the higher risk strategy.

More to follow in coming weeks – including demand and rail seating (safe standing).