This is the book I had hoped to write. It confirms that Ronny Goodlass is a hybrid of Merseyside football legend, inspiring youth coach, passionate radio broadcaster, diehard Blue and one of nicest men you are likely to meet. 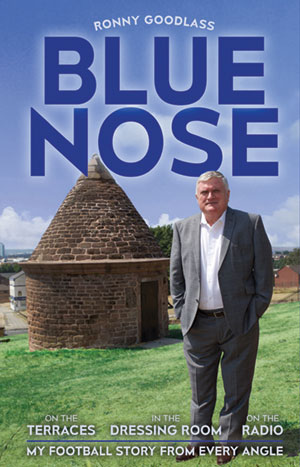 Aptly titled, this page-turner confirms that Ronny Goodlass is a hybrid of Merseyside football legend, inspiring youth coach, passionate radio broadcaster, diehard Blue and one of nicest men you are likely to meet.

Everyone deserves at least one friend like him. More than a mere chronology of the life and dreams of a gifted left winger, Ronny writes as he talks with unabashed honesty, common sense and a wonderful sense of humour. As a result, his autobiography is both funny and eye-opening.

Many of his anecdotes reflect his joy of being an Evertonian. In particular, I love his description of his match-day baptism as a tiny boy among the 75,000 gathered to watch his heroes against title-chasing Burnley in 1960 and later of his mother hiring a 52-seater coach to take her family and friends to witness him represent England Schools against Wales at Wembley.

Then there are his insights into his stint as an apprentice footballer cleaning and sprinkling magic dust on the white boots of Alan Ball and, of course, his pride in playing League and Cup football for his beloved boyhood club – especially the dramatic runs in both domestic cup competitions in 1977. These include his reaction to the bitter disappointment of a certain referee disallowing the winning goal in a famous semi-final clash. You may recall that, as the prospect of a replay loomed, Ronny out-smarted Tommy Smith, sprinted to the bye-line and crossed, Little Duncan flicked the ball onto Bryan Hamilton who diverted it past Ray Clemence. Four decades may have passed but it’s clear that Clive Thomas’s questionable ruling rankles Ronny as if it was yesterday.

Ronny was a trailblazer. He moved to play for NAC Breda and ADO Den Haag and subsequently embraced his European experience to coach some outstanding youngsters at Bellefield under the watchful eyes of Joe Royle and John Hurst. Later and long before the explosion of club-based community programmes, he displayed similar initiative in registering a charity, namely Health Through Sport, to change the lives of people who otherwise would be excluded frm mainstream society — disadvantaged youths, ex-offenders, recovering drug users and others at risk of anti-social behaviour — through their participation in football coaching sessions to improve their self-esteem, sense of belonging, teamwork, ambitions and job prospects.

Again, I’m biased – I’m a friend who has talked, or rather listened, to Ronny at length. Since our initial face-to-face chat which lasted for six hours, we try to limit our trans-Atlantic phone calls to an enthusiastic two-hour maximum. While I’ve heard many of his tales, he reserved my favourite for my farewell dinner at the Anglican Cathedral. There, he described how Bill Shankly and Bob Paisley had tried to lure him to Anfield until his father proclaimed: "Ronny, it’s up to you. But if you sign for them, I’ll never be able to watch you play again." Another fond memory is sitting next to him in the Goodison Park press box on match days. I’m amazed that, given what he has seen unfold before his eyes during recent seasons, he has yet to swear into a Radio Merseyside microphone.

This is the book I had hoped to write. Unfortunately, illness prevented me from doing so. Nevertheless, I take credit for the title. Mine would have been a different book. My focus would have been on his immense courage. Ronny is a real inspiration to me and those close to him. His spirit and determination in overcoming an obstacle — a limb difference — to realise his dream of wearing the No 11 shirt of Everton. Like the great Jim Abbott who played for the New York Yankees, Ronny has never felt sorry for his fate of birth. Far from it. The challenge inspired him. But, unlike Abbott, who was celebrated for his courage nationwide, my good friend had to withstand bile from the insensitive terraces away from his beloved Merseyside.

Even though I have one, I don’t know the process for garnering a UK honour, but I do know that, given his courage to excel at professional football and change the lives of less fortunate strangers, Ronny Goodlass is more deserving than most.

Like life-long Blues such as Derek Temple, Tommy Wright, Colin Harvey, Joe Royle, Kevin Ratcliffe, Derek Mountfield and a few others, Ronny has helped to fill the gap left by the great Brian Labone and, in my eyes, is Everton royalty. But, more than anything, he is one of us, a genuine Blue Nose who — win, lose or draw — looks forward with increased optimism to the next Everton game.

"Blue Nose – My Football Story from Every Angle" by Ronny Goodlass

Available at Waterstones, Linghams, Everton FC and other local book shops as well as via healththroughsport.co.uk/bluenose for £18.99 + £3.50 p&p within the United Kingdom