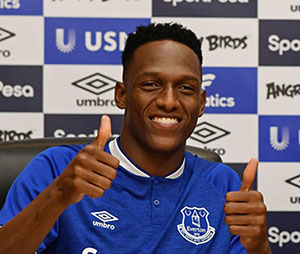 Yerry Mina has been ruled out of Everton's next three games at a minimum as he continues to recover from an unspecified foot problem.

The Colombian has joined his former Barcelona team-mate, Andre Gomes, in the treatment room at Finch Farm, with neither player expected to join in with training with the first team until after the upcoming international break.

Gomes arrived at Everton with a hamstring problem picked up on Barca's pre-season tour of the United States and was not expected to be fit until the Premier League campaign resumes in mid-September but it was hoped that Mina might be fit to make his debut before then.

However, manager Marco Silva told the media today that the defender's minor foot problem will need five weeks to heal. That means he won't be available for this weekend's trip to Bournemouth, the League Cup tie against Rotherham or the home game against Huddersfield on 1st September.

“I don't want to go into all the details but I can give you a small report,” Silva said. “It (the metatarsal) is an old injury but this is nothing special.

"In the past he had an injury in his metatarsal and he had surgery but this is nothing (to do) with the previous injury in the past.”