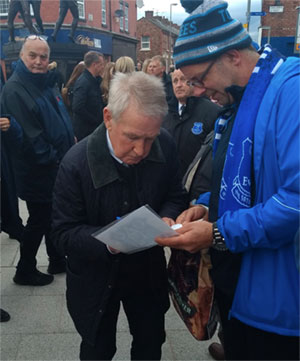 The statue depicting Colin Harvey, Howard Kendall and Alan Ball was installed on Goodison Road earlier this week and was officially unveiled at 5pm this afternoon.

Harvey, the last surviving member of the Toffees' most famous midfield contingent, was on hand to sign autographs after big reveal. The families of Kendall and Ball were also in attendance to see their loved ones recognised with the statue that stands outside St Luke's Church.

Kendall, Harvey and Ball formed a magical partnership in Everton's midfield in the 1960s and 1970s and were crucial to the club's title triumph in 1970. Though Ball was controversially sold to Arsenal in 1971 and would make a name for himself as a manager elsewhere, both Kendall and Harvey would go on to coach and manage Everton, initially in partnership during the spectacularly successful mid- to late-1980s and then separately in the 1990s.

Gary Evans, chair of the Everton Fans' Forum which has been a driving force behind having the statue commissioned and installed said earlier this week: “The idea came about through a combination of things. The iconic image of Ball, Kendall and Harvey used on the main stand got fans talking about their successes and when Howard Kendall sadly passed away, this seemed to galvanise fans and the Club even more to think of a way to honour them.

“I think that the statue will become a new meeting place for fans before the game. Its location means that as people walk toward the ground on the Goodison Road side, no matter which street they use, they should get a glimpse of the statue, and a reminder of our achievements as a club.”

Whenever the ball went to any of them there was a sense that something was going to happen, got you on the edge of your seats, you didnt want to miss a single moment. If you wanted to go to the toilet you would force yourself to hang on till the whistle went in case you missed anything.

I’ll never foget the night we won the Title, the crowd wouldt move till the players came out to wave to the crowd.

I just hope and pray all our younger fans will one day experience a team that will raise their spirits in the same way. COYB
Stan Schofield
4 Posted 02/05/2019 at 10:04:06
I was lucky and privileged to see them. They were arguably the best midfield in the world at the time, rivalling Brazil's 1970 midfield.

Gerry, that was a great night. I was in Goodison Road with my dad, and it was announced that the trophy would be presented on the Goodison Road stand. As a result, people on the terraces moved forward to get a look, and we were at the front by the wall, so ended up on the pitch. Our only time on the hallowed turf. Brilliant.

Shame money rules the game now but I'm sure we can still ruffle a few feathers next season, starting with at least 4 points off the Shiesters to derail them.

We were fortunate indeed to see them play.

David Pearl
16 Posted 02/05/2019 at 21:07:44
Well, I will have to be content with having seen Reid Bracewell Steven and Sheedy (sheedy, sheedy). Shame we don't have proper highlights of that era. A few more years of Siggy Gana and Gomez will do for this generation if we can add the goals ahead of them. You have to be proud of our history and equally as frustrated at the near misses.
Peter Mills
17 Posted 02/05/2019 at 21:43:35
David#16, we were very fortunate to see those guys too!
Jamie Evans
18 Posted 03/05/2019 at 18:50:39
Goosebumps on my goosebumps at the unveiling earlier on. Great words from all who spoke, particularly Derek Temple.

And how much does Bally's son sound like the great man?!

Harvey, one England cap, and Kendall, no England caps, at all. Both of then would walk into the current England side.

The nearest team I've seen to the 69 -70 team is the current City team and I have a sneaky feeling that given the way of the football world now, one or more of them would be, by now, in that City team.

Unfortunately, we don't do dynasties and failure to get Clough and Shilton proved costly. Anyway, I'm sure we are on the march again once a striker or a wide or forward player can be found to help Richarlison and Co get into double figures will make all the difference. Cmon City 👌

Alan McGuffog
26 Posted 04/05/2019 at 06:58:59
Agreed Derek although I would substitute 1968-69, for 1969-70. The football in 68-69 was sublime, the best club football I've ever seen. The following year was special, obviously, and we added a bit more "steel", and were able to grind out results when needed. Think we had a fair few one nil wins. Halcyon days.
Paul Burns
27 Posted 04/05/2019 at 07:08:47
Everton won more league points than anyone else in the much vaunted decade of the 1960's, a fact which is pretty invisible because no unbiased journalism exists any more and hasn't for a long time.
That deserves a statue on its own and another for winning the 20th century league.
We'll have to build 2 new grounds because we're running out of space for them.
Derek Thomas
28 Posted 04/05/2019 at 10:04:25
Alan @ 26: So very true; I was going to mention that, but got the hurry up off the missus and had to post what I had as we were on our way out.
Stan Schofield
29 Posted 04/05/2019 at 10:35:19
Alan@26: Definitely. The football we played in that season was fantastic. When the subject of Everton crops up with supporters of other teams, and they remark about our being midtable compared with Liverpool, I always relate the great Everton sides, particularly the 60s ones in terms of pure quality of football. I tell them we were the then equivalent of today's Man City, but they always express disbelief. The only other supporters who understand and know the history are Utd, City, Arsenal etc supporters of the same vintage as myself, who witnessed the football of the 60s. I was speaking to an old City supporter only the other day, who's in 7th heaven currently, but who remembers clearly their 68 title win and the fine team they had, and recalls how good we were, particularly Ball, Harvey and Kendall.
Alan J Thompson
30 Posted 04/05/2019 at 11:30:29
A midfield that not only could take on and beat players but quite often did. If you didn't see them you won't believe it, truly magnificent!
Dave Abrahams
31 Posted 04/05/2019 at 18:46:20
Steve (21), nice one and maybe a bit of truth in that and one of the reasons he left Everton.
Ron Marr
32 Posted 04/05/2019 at 20:34:18
Players gambling ? No surprise there. In 1986 I was in the Liverpool players lounge with my Red fan nephew before a game, and Ian Rush and Steve McMahon we’re betting with each other on the horse racing on the Lounge tv
Andy Meighan
33 Posted 04/05/2019 at 20:46:57
Steve @21,

Good one, that. I was lucky enough to have seen them a few times in 69-70. Being only 10, my memories are of Bally and his shock of red hair and being my absolute idol right down to his E-Type Jag. The man to me was a genius.

As for Howard and Colin, well... what can you say? Absolutely superb footballers and served the club brilliantly. As Labby brilliantly said, the only 3-man team ever to win the league. God, what a side we were.

I remember the other lot's Secretary, aka now as CEO, name of Greenwood, I think, saying that all their players were advised to get themselves an Accountant (Agent?) but most just got a Turf Accountant which was seen as a reference to Betting Shop Hughes. Rooney and Owen show that little has changed other than the amounts wagered.

Q;Who weighed 14 stone and rode the winner of an English Derby?
A; Lester Piggott's cell mate

Reporter "So Lester, when did you think you had the race in the bag ?"

Piggot - "About a month ago"

Dave Abrahams
42 Posted 07/05/2019 at 18:56:09
Darren (41), yes remember that one Darren, I also think the Americans didn’t like the way Lester rode from behind and won the race from there, they like their jockey’s to lead from the front.

Lester is in the front of my all time sporting hero’s along with Ali, Billy Boston ( Wigan rugby league player) Sonny Liston and Sugar Ray Robinson.

Mike Berry
43 Posted 07/05/2019 at 20:08:43
Thought it would not work - the boys facing away from each other - but it does. Hugely emotional night on Friday seeing the statues of 3 GENUINE legends. But one question when do we see a statue of the VISION?
Alan J Thompson
44 Posted 08/05/2019 at 05:19:05
Dave(#42);I think that about leading comes from racing on dirt tracks as when horses get dirt in their eyes they tend just to run with the pack hence the introduction of pacifiers and why so many winners on dirt are front runners.

Remember the story of Lester and the Hills boys flying to a York meeting?