The more things change, the more they stay the same…

Profit & Loss account situation, it is unlikely in the extreme that we will see significant inward transfer activity involving highly valued players this summer

Much has been spoken about Everton’s approach to this transfer window, the first full summer window for which Brands & Silva will have had the opportunity to plan well in advance.

Whatever plans they have must be put into the context of Everton’s financial position. Therefore, I thought it useful to look at what’s occurred financially since Moshiri’s involvement in Everton, our likely current position and, with one eye on profit and sustainability rules in the Premier League, a look at the financial year just started.

Moshiri initially acquired 49.9% of Everton’s shares in late February of 2016. After more than a decade under the ownership and direction of Bill Kenwright, as is well documented, Everton’s finances were in a parlous state. Heavily indebted with a combination of short- and long-term debt totaling £57 million and a net loss for 2015-16 of £24.3 million, Moshiri’s arrival was critical in its timing. The negative value of the balance sheet (-£43.4 million) reflected the lack of capital and years of accumulated losses.

The assumption was that Moshiri would not only provide much needed capital but bring in the commercial expertise needed to grow the business, providing much-needed funds for improving the quality of the squad. In his first public announcement, he also made it clear that one of his greatest priorities would be to find a new home away from Goodison Park: 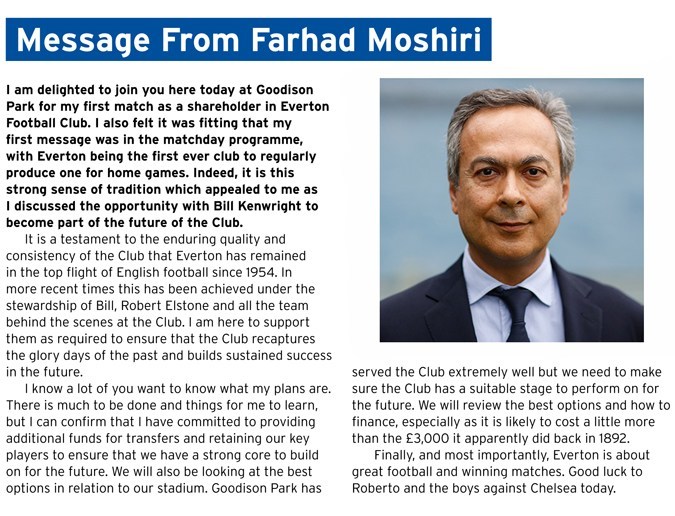 The next three years proved to be interesting, never boring (other than some of the football), resulting in great change on and off the pitch, with many expensive mistakes in recruiting players and managers. I don’t propose going through that now in detail but just to highlight the financial aspect of this time.

Points to note would be the increase in revenues mainly due to higher TV revenues and participation in the Europa League in 2017-18, increase in wages and amortisation (see below) and a large increase in exceptionals including former manager compensation and the costs associated with Bramley-Moore Dock preparation. The impact of very significant investment in players can be seen below:

When Moshiri first arrived, a lack of capital was a serious issue for the club. The huge expansion of investment and the associated increased cash and non-cash costs, combined with limited meaningful increases in revenue, have returned the problem.

The increased investment in players, and the resulting increase in wages, plus the costs associated with Bramley-Moore Dock, has meant the £250 million provided by Moshiri and the substantial player trading profits (circa £148 million over three years) have not proved enough to meet the club’s capital requirements.

The club had its external debt cleared initially by Moshiri in 2016 but since has had to return to borrowing from external sources. The last accounts showed £75.188 million of external debt (ICBC and Santander) and £9 million of cash. Despite Moshiri having provided an additional £100 million since the last accounts, as I will demonstrate, we will continue to have a net debt position. Whilst that in itself may not be overly problematic long-term, it will affect our ability to trade in the transfer market – especially with a stadium to fund in the near future.

So far, I have dealt with the known position as published in successive accounts. In order to understand our current position, I can only use forecasts as the accounts for 2018-19 will not enter the public domain until the very end of the year. However, as long as a reasonable margin for error can be accepted, it’s possible to give a reasonable view of the last financial year and the current:

The main points are as follows:

On that basis, my projected Profit and Loss account for 2018-19 looks as follows:

I’m happy to accept that these are projections and I’m sure there’s a reasonable margin of error; however, it is clear that 2018-19 will produce a record loss for the club. The enormous increase in squad costs plus the costs associated with Bramley-Moore Dock have not been met with increases in income and have been exacerbated by the failure to qualify for Europe. It’s important to note that fresh injections of capital alone, apart from reducing interest costs, do not impact the profit and loss account.

Companies can, of course, assist their cash flow by altering the balance between trade creditors and debtors. In the case of football clubs, they can perhaps adjust payment terms so that they receive funds from transfers more quickly than they pay sums owed for incoming players.

Assuming we have maintained that balance fairly constant, and given Moshiri’s capital injection, we still have headroom with our cash and credit facilities. In addition, we will have received the latest installment due to us from Manchester United (albeit payable to Santander) of circa £18m which reduces our indebtedness to Santander.

However, and this is the crunch, we are not in a position to spend hugely in the transfer market unless we have significant outgoings in player sales (or very unexpectedly large increases in commercial income).

The reason for this is quite simple: the greater our expenditure now (assuming we have the capital available, which is limited as above), the greater the impact on the 2019-20 accounts.

The 2019-20 profit and loss account will, in the absence of significant player sales or unexpected income, look quite similar to 2018-19, with a similar scale of loss.

Now it’s possible that, with astute player sales, the 2019-20 P&L loss can be reduced by a fair amount. Sales of players such as Gueye, Lookman, even McCarthy will generate profits without overly affecting our core squad (I’d love to keep Gueye but, at his age, the potential profit may be too tempting).

Impact of Transfers on P&L

The Premier League rules are very clear. The maximum permitted losses over a 3-year period are currently £105 million. How they calculate the losses is slightly different from what appears in the accounts. For example, the cost of academies and any costs on stadium development or improvement can be deducted.

If we assume we’ve spent £1 million a month on Bramley-Moore Dock to date, and that the academy costs £4 million a year, over three years that would add up to £48 million.

By my estimates (again, I accept there’s a margin for error) without profitable player sales or a significant increase in income in 2019-20, our accumulated losses, after removing Bramley-Moore Dock and academy costs (£48 million), are in the order of £155 million, potentially £50 million above the permitted losses.

Those excess losses can be covered by player trading profits – I’m not suggesting we are breaching Premier League rules. I also accept that there may be a margin of error that reduces those figures further.

However, I am saying that it is unlikely in the extreme that we will see significant inward transfer activity involving highly valued players. Even if Moshiri committed to funding through additional capital injections, that does nothing to help the Profit & Loss account situation which, by my calculation, must be a critical consideration.

As ever, I’m only expressing my view of our current financial position. I am very happy to make good any errors or omissions, but I believe the above accurately represents the position we are in.

We still have the opportunity for a fantastic future ahead of us and, with Brands, future recruitment will be of a quality greater than we’ve ever had before. However, we need to address the legacy issues of the period from 2016 to January 2018 to move forwards.