Ancelotti suffers a rout on his return to Chelsea 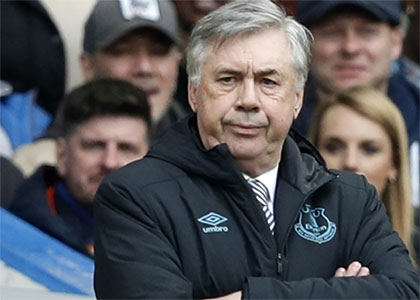 Carlo Ancelotti was humiliated on his return to Stamford Bridge as Chelsea's injury-hit side tore Everton apart in another stark illustration of how far off the Toffees are from challenging for the top four.

The Italian's men were 4-0 down before 55 minutes had elapsed and amid a shocking performance that ran through the entire team apart from Jordan Pickford, they had no answer to an opposition who made a mockery of their European pretensions.

Chelsea scored a brace in each half and finished the match at a canter with Everton largely failing to really lay a glove on them apart from one gilt-edged chance for Dominic Calvert-Lewin in the first half.

The visitors were already 2-0 down when the young striker was put clean in on goal by Richarlison but he mis-hit his shot across goal and wide, squandering the chance to extend his impressive scoring run.

Despite starting with intensity on the press, Everton were quickly dismantled by the Londoners' slick passing. Mason Mount sounded an early warning bell when he latched onto Willian's cross but was foiled by an excellent save from Pickford.

It would take a quarter of hour, however, for the Blues' defence to be breached, with Chelsea able to play smoothly through the lines and Pedro finding Mount to drill a shot between Pickford and his near post.

Pickford then had to palm away an effort from Willian in the 19th minute but it merely delayed the inevitable by a couple of minutes because Everton were easily sliced open again and Pedro timed his run perfectly to latch onto a through-ball and fire home.

Everton had one more glimpse of goal towards the end of the first period when Richarlison collected a sliced clearance by Kurt Zouma but he ended up running into trouble with better options available to his right and the chance was closed down.

Ancelotti tried to change things up at the interval by withdrawing Bernard and introducing Theo Walcott but whatever he had said in the dressing room appeared to fall on deaf ears because Chelsea would put the game to bed within 10 minutes of the restart.

Frank Lampard's side put together another impressive passing move that sucked Everton's centre-halves away from the centre before finding Willian open 20 yards out and he drove an unerring shot into the corner to make it 3-0.

And the rout was complete in the 54th minute when a short corner routine left Willian space to put a dangerous ball into the six-yard box where Olivier Giroud out-muscled Mason Holgate to convert from close range.

Richarlison forced a rare save from Kepa at one end while another terrific stop from Pickford at the other prevented another before Walcott had an ideal opportunity to put a consolation goal on a plate for substitute Moise Kean but he scuffed his centre and the keeper claimed it.

Chelsea might have extended their lead in the closing stages but Djibril Sidibé made a last-ditch, saving tackle to prevent a fifth and Pickford turned Cesar Azpilicueta's low effort from 25 yards behind.

Ultimately, though, it was another chastening afternoon for an Everton outfit that was outclassed in almost every department and which remains a long way short of the grand ambitions of which their manager spoke in the lead up to this game.

The heavy defeat leaves the Toffees in the bottom half of the table and with their hopes of finishing in the Europa League qualifying places looking a lot slimmer than they did a month ago.