Keane discusses overcoming virus and preparations for restarting the season 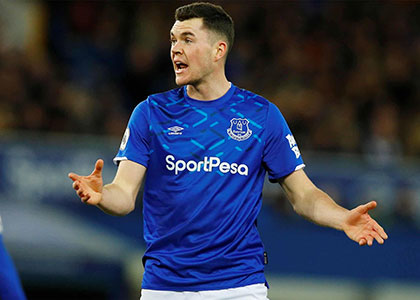 Michael Keane has revealed that he contracted COVID-19 in the early stages of the pandemic but he has fully recovered and, thanks to the club's lockdown fitness regimen and recent resumption of training at Finch Farm, is nearing readiness to resume playing.

The defender will be one of only two fit senior centre-halves when, as expected, Everton restart their 2019-20 campaign against Liverpool on 21st June after Yerry Mina tore a thigh muscle at Finch Farm last week. He says he is “itching” to get back to playing but his attempts to keep fit a couple of months ago were hit by the coronavirus.

“Three months without football has felt like an eternity,” Keane told The Mirror. “It's been such a strange time as I had the virus myself early on. I got [it] after we'd finished training but before the country went into lockdown. I went to play golf at Wentworth, felt ill driving home but my pals didn't get it so I don't really understand where I got it.

“I was in the shower and all of a sudden I felt like I was going to faint. It wasn't something that I'd had before. I came out of the shower, I was soaking wet just lay on the bed and I just needed to lie down.

“I didn't think too much of it, I was okay but then I woke up the next day and I felt really off. I didn't have a cough but felt lethargic, low on energy and then went to bed that night and had the sweats for two nights.

“I went out for a run, was going out for 20 minutes but had to stop after three and a half minutes because my chest wasn't right, I was really heavily breathing and I had to stop and walk home.

“I knew at that point something was wrong. I told the physios and they sent me a test, it arrived six days later by which time I felt better but it still came up positive.

“Even when I felt better, it probably took two weeks for my chest to feel back to normal when I was running.”

Keane explained how he turned his garage into a fitness centre and thanks to the support of the club's training staff, he was able to get back in shape after he had overcome the virus.

“The club have been great, really supportive.” he continued. “They sent cleaners out to all the lads' houses, sanitised all the houses. They have a sanitising gun and it sprays mist, they sprayed the whole house, my car and all the players had that.

“They also gave us the option to take a [wage] deferral. I think everyone appreciates that clubs are going through a difficult time through this and the club left it up to us on deferrals, you could choose what percentage and I think some of the lads have deferred a lot.”

Everton's players have been back at Finch Farm under evolving training protocols for three weeks now while the Premier League and its member clubs have moved through the stages of ‘Project Restart' which should culminate in top-flight action resuming on 17 June.

“I've been really impressed with the way it's been handled and the protocols make you feel safe,” Keane said before turning to the topic of the Toffees' getting back underway without fans in the stadium.

“It will be strange not having fans but it will be the same for everyone. Once you're actually playing, you don't focus on the fans, you focus on the pitch and, as a centre half, you're scanning the pitch and shouting at the midfielders to get into position.

“Even with no fans there, just being in your own surroundings of course it would be better to be at Goodison.

“But if we have to play at a neutral venue, although you don't have the same comforts of Goodison and the little things like having the same seat in the dressing room, it won't affect us too much.”

Keane has quite possibly opened a can of worms, but it's gratifying to know that a few of our players have done the right thing â€“ and it might even help us with FFP!

Seems like a decent feller but I don't want excuses and sob stories. I want him to improve and be able to remain fully focused on the football pitch.

Otherwise move him on whilst we can still get some of our money back on him. He and Mina in the same team is laughable. Mina is the better of the two.

Alan J Thompson
7 Posted 08/06/2020 at 04:56:45
I'm probably wrong but the piece gives the impression that more urgency was given to converting the garage, spraying the house and seeking wage deferrals than there was getting a Test Kit to him. I mean, six days, would nobody volunteer to drop it off or were the Physios not at work either?
Eric Myles
8 Posted 08/06/2020 at 08:48:37
What I take from this is that he wasn't hospitalised, didn't even go see a doctor, just got on with it?

Alan J, there was probably a shortage of tests available at the time so it took a while for the physios to source one.

If you earn 𧴜k a week and offer to defer even 75% of that you're still receiving a huge amount of money and you're simply putting off, for a little while, receiving the rest.

A wage "cut" for a period of time would be different.

Hugh Jenkins
10 Posted 08/06/2020 at 10:04:22
Slightly off topic - today according to the BBC football website, the Daily Express is carrying a large back page photo of Keane training - he is fully kitted out in blue - without a sign of an Everton badge anywhere.

What is wrong with our PR department? We can't take advantage of publicity when it is given to us on a plate.

I can't think of any other team, in any other division, that would allow this to happen.

Funny, that's what happened the last few times I went out to exercise. Last year!

No symptoms = nothing to worry about, which is the bit that worries me, but more for others rather than myself, during these very frustrating times.

Tony Abrahams
17 Posted 08/06/2020 at 12:04:44
Proper contradiction those two John. When Gerard played with intensity he blew-up, and when Martinez, ever got his team to play with intensity, they used to look like a very good team, what a bloody shame!
Martin Mason
18 Posted 08/06/2020 at 14:59:40
Just read an article by Rio Ferdinand saying that he believes Keane and Mason will go on to great things for us. I hope that he's right.
Mark Dunford
19 Posted 09/06/2020 at 21:12:11
Michael Keane has come across very impressively during the course of the lockdown â€“ on TV and in print â€“ seems to be a genuine, thoughtful honesty here that seems to go far beyond the usual PR.