When the Liverpool & District FA was formed in 1882, they turned for guidance to their more knowledgeable counterparts in North Wales because their organisation had been formed some four years earlier. The members of the Everton executive thereafter would make incursions into the Principality in search of experienced players in the hope of improving the standard of play at Anfield. One such man who caught their attention was William Lewis.

Born 1864 in Bangor, he was the third Son of Edward, a stonemason, and his wife, Margaret. The family home was at 72 Hill Street. According to the 1881 census, William has followed the male members of the family into the stonemason trade and has begun playing the association game with his local side Bangor. On the 4th of February, 1884, Willie Lewis represented the North Wales FA against their counterparts from Liverpool on what was the recently opened Bootle Cricket enclosure on Hawthorne Road. He scored one of the goals as the game ended in a 2-2 draw.

On the 14th of March, 1885, he made his International debut against England on the home of Blackburn Rovers at Leamington Road and scored a late equaliser as the game ended 1-1. Lewis had made another several appearances for Wales when he signed articles with Everton in August, 1888.

The Welshman was first seen at Anfield when Everton beat Halliwell 2-1 before taking part in the club’s inaugural Football League match against Accrington where he took up position at centre forward. The day was a success all round as 12,000 packed the Anfield enclosure to watch the home side win 2-1. Lewis took part in the next game, a 2-1 home win over Notts County, missed the game at Aston Villa, but was back for the match against Bolton Wanderers at Pikes Lane. He managed to register his only goal for Everton as they were beaten 6-2. Lewis then returned to North Wales and never played football for Everton again.

Why he did not stay at Anfield is unclear but, as was their policy, the Everton executive may have insisted that he reside in Liverpool and the Welshman, who was now a member of the North Wales Fire Brigade, may not have wished to do so. Lewis quickly re-joined Bangor and assisted them in reaching, for the first time, the Welsh FA Cup final. The game, against Northwich Victoria, took place on 27th of April, 1889, on the Racecourse Ground in Wrexham and Bangor won 2-1. 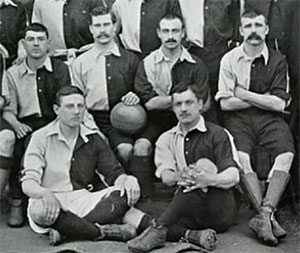 Billy Lewis, seated on the right, with some of his Welsh teammates. The two players seated on the left are former Everton players Joe Davies and Charlie Parry.

Next season, Lewis joined a Crewe Alexandra side who had just become founder members of the Football Alliance and won several Welsh caps during the three seasons he spent there. While at the Cheshire Club he married Amy Williams and their first child, Blodwyn, was born in Bangor in 1891. In 1892 Lewis signed for Chester, who were then members of the Combination along with the Everton second X1 who they met in the opening game of the season on the new Goodison Park. It was a painful return to Liverpool for the Welshman as Chester were beaten 10-1. Nevertheless, he was to have his revenge when the return game took place on the Chester home ground at Faulkner Street in front of a capacity crowd. The Everton combination side lost their first game of the season 3 goals to 2.

The Lewis family must have now moved to the Cheshire County town for records reveal that another two children, William and Mabel, were born there. Billy Lewis continued to be capped for Wales during his time at Chester until his move to Football League Division 2 side Manchester City during the summer of 1896.

He took part in the opening game of the season at Hyde Road and scored in a 4-1 win against Darwen. Lewis played another 11 league games before being dropped from the side following a 6-0 FA Cup defeat at the hands of Preston North End. He then returned to Combination football with Chester where he again played for Wales against Ireland on the 19th of February, 1898, and lined up alongside former Everton players, Smart Arridge, now plying his trade with New Brighton, and Charlie Parry, who was playing for Newtown. The match took place on the home of the Llandudno Swifts Football Club.

The local council had decided to make the occasion special by staging two international sporting events on the same venue. Catering facilities were improved, and two temporary grandstands were erected at the location. The festivities began in the morning with a hockey match between Wales and Ireland that the visitors won 10-0. The small goal posts had been removed and ones appropriate for the occasion set in place when the football players took to the field in front of a crowd estimated at 8,000. It turned out to be a great day for the Irish as their football players completed a double by winning the game 1-0. It was the final appearance by William Lewis who had now played 27 times for his country and scored 12 goals.

The 1901 census informs us that the Lewis family now hold the licence of the Duke of York public house on Frodsham Street in Chester but by 1911 all five of them are living in the Hulme area of Manchester where the head of the household works as a labourer. William Lewis died on the 30th of July, 1935, and was buried at the Southern Cemetery in Manchester.