William Wilson – The Last of the Originals

Local man Billy Wilson became the 36th and final player to be used by Everton during their first chaotic season as members of the Football League. Born on 4 January 1868, in the Islington area of Liverpool, he was the first child of James, a bricklayer, and his wife Sarah. William first saw the light of day while the couple were living at 134 Constance Street, as did his brother John who was born two years later. The family later moved to what was then the most notorious street in Liverpool. 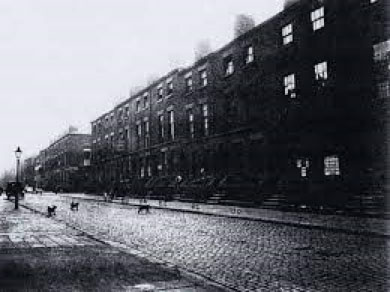 According to the 1881 census they were, along with several other families, living at 66 Blandford Street (pictured here) that stood not far from their birthplace. This long thoroughfare, which ran parallel with London Road, had a fearful reputation because of its many shebeens and houses of ill repute. Indeed, it was so bad that, in 1891, the City Council changed its name to Kempston Street.

Number 66, however, stood next to the parish church of St Mary Magdalene so some spiritual guidance would have been present in the home of the family while the two boys were growing up. It was while living on Blandford Street that the Wilson brothers came to notice playing for the Stanley Club on the opening of their new home at Walton Stiles against Darwen on 30 March 1885. Both brothers then played for Stanley on a regular basis and William captained the side that were defeated by Bootle in the 1889 Liverpool Cup final.

Billy Wilson had now developed into an excellent left-back and it was at this position that he played his only Football League game for Everton. The club executive first invited him to play at centre-forward in a home game against the South Shore team from Blackpool, where he scored in a 3-0 victory. The next Saturday, he was back in the team for the final Football League game of the season against Blackburn Rovers at Anfield. 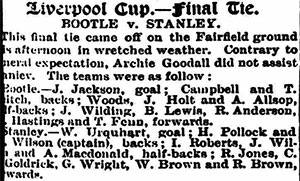 The two clubs had originally met on 5 January when the Anfield ground was hardened by frost and shrouded in a deep mist. The two sides agreed that the game should go ahead and, regardless of the result, it would be declared a draw. The gates were then opened and around 6,000 people paid for admission to watch Everton win the game by a single goal that was scored by Bob Watson. However, the game’s governing body would not accept the pre-match arrangement and ordered a replay on the 30 March.

It was not reported as to whether the gates were thrown open or if the 6,000 people who attended the game had to once again “dig into their pockets”. Nick Ross, it was claimed, was indisposed so Billy Wilson took his place at full-back.

The following two newspaper reports confirm, however, that the Everton captain was in fact watching his brother play in the FA Cup Final at the Oval Cricket Ground in London…

Ross was away (up in London) with a sprained ankle and his place was taken by Wilson of Stanley. This individual is a “Jack of all Trades” for last week he took the centre-forward position and his play at full-back left nothing to be desired. (Athletic News)

Everton had to do without the services of Ross who was at The Oval. Wilson took his place and it is correct to say that the great full-back was not missed at all in the effect in which Wilson played. (Liverpool Mercury.)

Billy Wilson represented Everton, in friendly fixtures, on several other occasions before returning to Stanley where he ended his career. He lived for a while in Everton but, by 1911, he was back lodging in a house off London Road. He lived in this area for the rest of his days until his death in 1957 while lodging on Anson Street. At the time of his death, William Wilson was the last surviving member of the Everton team that had taken part in the first season of the Football League.

That's some heritage for Billy Wilson, to be the last surviving Everton player from the first season of the Football League.

Dave Abrahams
2 Posted 15/11/2020 at 12:39:39
You had me picking my brain there Tony with Blandford Street, then all became clear with Kempston Street, it’s amazing to think that Billy born in 1868 around Islington was still walking around the same area in 1957, Anson Street is just off London Road, a small street, and I wouldn’t be surprised if we walked past each other those days or even queuing up to get in the Kings Picture House ( cinema). If only I’d known, could have got his autograph, what a present that would have been for Dr. David France, I would have gladly given it to him.
Bob McEvoy
3 Posted 24/11/2020 at 00:44:30
Impressive research, Tony, Billy lived until he was 88 or 89. That's some going having spent his whole life in a poor rundown area of Liverpool.