The Welsh Marches village of Trefonen which lies in Shropshire was the birthplace of James Morris who made a most unusual appearance for Everton during their first season as members of the Football League.

He was born in April 1863, the thirrd child of Anne and her Welsh husband Robert. According to the 1881 census the family were living in Oswestry and James was working along with his father, as a brickmaker.

He began his football career with an Oswestry club who were founder members of the Shropshire FA in 1879. They shared a ground with the local cricket club at Victoria Road and lifted the Welsh & Border Counties FA Cup in 1884 by beating The Druids. They also won the Shropshire Senior Cup one year later by beating St Georges on Monksmoor Racecourse at Shrewsbury.

Jimmy Morris had established a place in the Oswestry side when they played Everton on the 13th of March 1886 and lost the game 2-0. The next season Morris had a busy time with Oswestry as they participated in the FA Cup, losing in round three 3-0 away at Stoke and were later eliminated from the Welsh & Borders knockout. 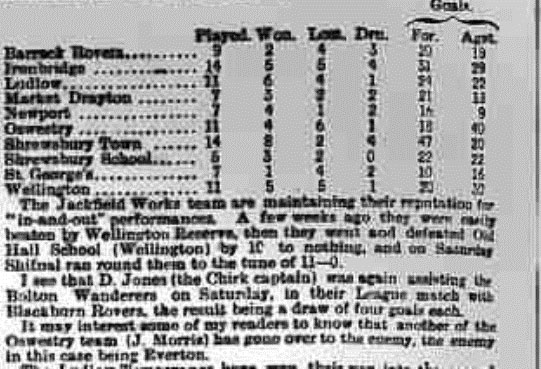 On the 21st of March 1887, he won his only International cap when he represented Wales against Scotland on the Racecourse Ground at Wrexham. Around 4,000 people watched the visitors win 2-0. He was a member of the Oswestry club that became when the Shropshire Football League was founded in August 1888 and later accepted a trial with Everton in December. This fact was acknowledged in a newspaper called the Wellington Journal (see inset).

The Shropshire lad made his debut on the 8th of December against Long Eaton Rangers at Anfield, where he was asked to play in the centre of the forward line. He got off to a good start by scoring with almost his first kick off the game as Everton went on to win 3-1. Morris then had a double dose of what the conditions could be like for the football fans who lived in a region of North Staffordshire that had become known as The Potteries. 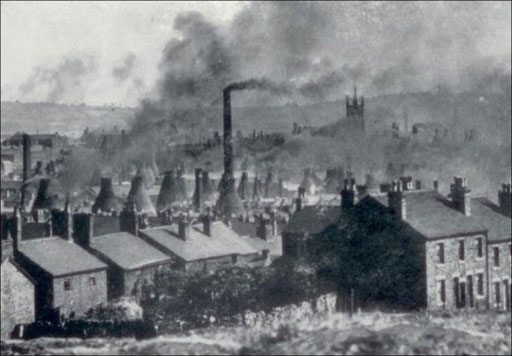 On the Monday, the Everton party arrived at Cobridge Athletic Stadium for a game against Burslam Port Vale who were members of the Combination. They found the landscape to be dominated by hundreds of bottle kiln ovens which emitted a black acrid smoke that restricted the daylight. This gloomy prospect was further compounded by a damp mist which covered the ground making it almost impossible for spectators to witness all aspects of the game. Jimmy scored one of the goals for Everton as the game ended in a 2-2 draw.

Next Saturday, the 15th of December, he made his Football League debut at Stoke. The weather conditions had not improved when Everton arrived at the Victoria Ground and this kept the attendance down to around 2,000 people. It was the 14th league game played by Everton in which they had scored 15 goals and conceded 28. Morris played at centre forward and was the 6th person to have filled this position since the start of the season.

The visitors lost the services of Tommy Costley who was injured after fifteen minutes and never played football for Everton again. Morris then missed a couple of good chances to put the visitors ahead and this did not go unnoticed by a visiting journalist who worked for the Football Field:

No goals were scored during the first half and, as the play changed direction, the weather conditions continued to deteriorate until darkness covered the ground. Seventy minutes had been played and no goals had been scored when the referee blew his whistle and declared the game to be a draw. The FA committee accepted his decision, and the match, amazingly, was not replayed. The following national newspaper article expressed sympathy for the visitors

After the experience of the past week, I imagine that the Everton team will have a very poor opinion of the Potteries as a pleasant place to be. On Monday they visited Burslam to play Port Vale and the game took place in weather which was really unfit for football. The fog was so dense that the players were barely distinguishable, and it was impossible to say with certain who scored the goals. Port Vale managed to make a draw with the Liverpool team and on Saturday I expected to see a great number of spectators present to witness the game at Stoke. The weather was, however, worse even than Monday and a much smaller number of spectators than usual attended the game. (Athletic News, 18th of December 1888.)

The Everton executive, none of whom had a boundless knowledge of the association game, did not select Morris to play again and it is fair to say that their treatment of him was slightly unfair. To expect a player, who was principally a half back, to solve the clubs goal scoring problems was perhaps asking a little too much without some time to adjust.

He returned to play football in Oswestry where he married Mary Jane Davies and began to raise a family. The 1901 census finds the family living in Sheffield but by 1911 they have returned to Oswestry and are running the Five Bells Tavern in Willow Street. James Morris was living at this address when he died on the 15th of July 1915 and was buried in Oswestry Cemetery.


Clive Gaulton
2 Posted 19/11/2020 at 21:34:00
Any chance of getting a copy.of this please! My email is 1967ceg@gmail.com. thank you in Anticipation.
Clive.
Don Alexander
3 Posted 19/11/2020 at 22:33:01
Ee-by-gum, another genuinely interesting article on the club's pre-history. I'm fascinated by matters historical and really admire the research efforts of those who pen these articles. Well done!

Given what's happened to Gbamin as soon as he joined us I thought it richly ironic that in the late 19th century one "Tommy Costley" also had a career-ending injury in the early days of his career.

Are we cursed by something more than Kenwright?