Having grown up in the Welsh Marches, 20-year-old D H Williams had become an experienced football player when he arrived in Liverpool around 1881. The Shropshire lad was to play a major role in the development of Everton Football Club before they established a permanent home at Anfield.

Born 1861 in Oswestry, he was the first child of William, a master shoemaker, and his wife, Ellen. According to the 1871 census the family were living at their business premises on a thoroughfare known as The Cross. David began playing football for an Oswestry White Star side who shared a home with the local cricket club at Victoria Road. The location must have been well-appointed because the final of the Welsh & Borders FA Cup between Newtown and Wrexham was played there in 1879. Williams had secured a position, as a clarke, in a Liverpool Solicitors Office when he took up lodging at Downing Street, situated off Breckfield Road North, which lay within the parish of St Saviour. The church was attended by such people as Tom Evans, Frank Brettell and John Houlding who would have invited Williams to play football for Everton on Stanley Park

What crossed his mind when he arrived is open to conjecture, but the conditions were certainly more primitive when compared to those he had left behind in Oswestry. The Liverpool FA had yet to be formed so the local teams had to rely on their County FA if they wanted to take part in competitive matches. The 1881-82 draw for the Lancashire knockout saw Everton paired with a team of silk mill workers from the small community that had developed around Middleton Railway Junction. DH Williams made his debut in the game, which took place on Stanley Park, and the home side won 5-0. The victory earned them an away tie with Turton.

The Everton party, which included Williams, left by train from Liverpool Exchange Station, changed at Bolton, and then made the steep 4-mile journey up to Turton where they found a set-up that was far superior to their own. Their hosts had comfortable dressing facilities at a local tavern close to their simple enclosed ground where a fee could be charged at the gate. It was a new experience for the men from Stanley Park who lost the game 3-1. Williams next encountered his first Derby game with Bootle.

The North Merseyside club had moved into the local cricket ground on Irlam Road, but this location was now earmarked for development by the local council. Everton played here in January 1882 and came away with a 4-1 victory. DH was later reunited with his former Oswestry teammates, whom Everton played home and away before a rather uneventful season ended. When football recommenced, he was to discover just how much Everton trailed behind the leading clubs of the county where he had now made his home.

The Lancashire Cup draw had granted them an away tie with the holders Blackburn Rovers on their Leamington Road enclosure, complete with dressing facilities, refreshment room, and covered grandstand that seated 600 people. Williams took part in the match that saw Everton beaten 8-0. Nevertheless, moves were now afoot to form a Liverpool & District FA that came to fruition in October 1882 with a local knockout being introduced. David assisted Everton in this venture, but they were eliminated by the eventual winners Bootle in the penultimate round. Nonetheless, buoyed by their trip to Blackburn, the club set about building their own enclosure on rented land that was positioned at the rear of a large private property that stood on Priory Road.

David H Williams took part in the opening fixture where the opposition was provided by Hartford St John who were members of the Cheshire FA. Everton won the game 3-1. On the 29th of December, 1883 he was selected to represent the Liverpool & District FA against their counterparts from Denbighshire on the Racecourse Ground at Wrexham where the more experienced Welshmen won the game 7-0. The months that followed saw the fledgling Everton club struggle due to the lack of quality fixtures to attract paying customers and their rent arrears began to grow. There was, however, a glimmer of hope on the horizon. 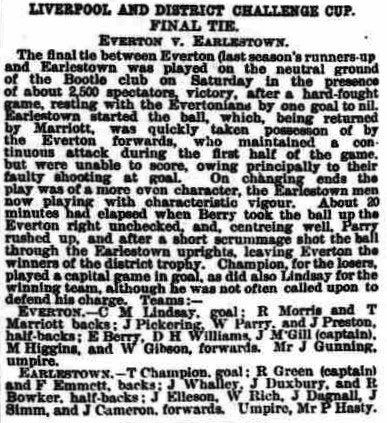 Everton had reached the final of the Liverpool knockout where a game with Earlestown awaited them. The Bootle club were in the process of developing the new cricket enclosure on Hawthorne Road and it was here that the game took place. There were around 2,500 people present to watch David Williams and his teammates win the game 1-0. Everton had been evicted from their Priory Road enclosure and were in the process of developing a new one on Anfield Road when the presentation ceremony took place at the Neptune Hotel in Clayton Square. Mr John Houlding, the Everton president, was on hand to receive the trophy and David Williams was present to collect his gold centred winners’ medal. He then made a couple of brief appearances for the club but was never to be seen playing for the first X1 on their new home at Anfield.

By the time of the 1891 census DH had moved to Heyworth Street and was living there when he met Marian Hughes, a farmer’s daughter from North Wales, who was in domestic service at Magazine Lane on the Wirral. The couple married at Corwen in 1895 and moved to Wallasey where, in a reverse of fortune for Marian, they took up residence on Magazine Lane and employed a domestic servant. The couple were living at 10, Nelson Street, New Brighton when the head of household died on the 23rd of April,1937 and was buried at Rake Lane Cemetery.