Holgate an injury doubt ahead of Spurs clash 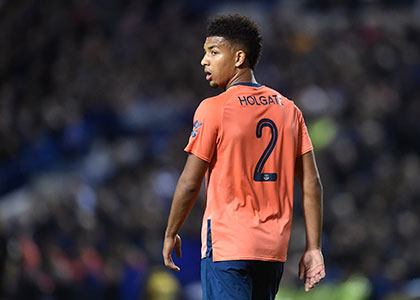 Mason Holgate's readiness for the new season suffered a blow during the first half of Everton's pre-season friendly with Preston this afternoon, with the defender's injury to be assessed.

The defender missed the final few games of 2019-20 with a shin problem but he was named in the starting XI of the Blues' second warm-up match of the summer.

He had to be withdrawn during the first-half, however, after what looked to be a potentially serious ankle strain and he left Goodison Park on crutches after the 2-0 win.

Manager Carlo Ancelotti indicated that it looked as though Holgate had injured his toe and that the club's medical staff would assess the full extent of the issue at Finch Farm tomorrow before any assessment can be made over whether he will make the Premier League season-opener against Tottenham next Sunday.

The boss confirmed that Yerry Mina trained this week and is expected to be available for the trip to North London.

Disappointed that Brandthwaite didnt get a game today.

Spurs is going to be a tough match and we are nowhere near prepared enough yet.

What a stupid time to be playing international friendlies.

Why didn't Delph and Mina play yesterday? They were both pretty well involved in the practice sessions from what I could see. Are they out injured again, FFS?

Nkounkou and Gordon to come on and replace Bernard and Sigurdsson in the final 15 mins to terrorise the Spurs defence. Maybe Allan instead of Branthwaite in the last 10 mins if we are leading by 2 goals (or trailing by 2 goals) to give him a taste of the Premier League.

I feel while we may well be closer to solving the central midfield problems now with our new signings, we are still lacking in defence and striker.

Tony Everan
14 Posted 06/09/2020 at 14:59:31
The crutches were a precaution just in case he had broken his toe, he will probably have an X-ray today to check it out. If it is broken, it's 4 weeks out, fingers crossed it's just taken a heavy knock and he will be all right.
Will Mabon
15 Posted 06/09/2020 at 15:05:41
Colin, the friendlies are a double-edged sword. Must be played for the fitness gains at least, but the risk of injury is there.
Jeff Armstrong
16 Posted 06/09/2020 at 15:05:45
Agree Jim, I was starting to wonder if I was watching a different player than a lot of people on here. Whilst he's a great athlete and excellent reader of the game, I feel his passing and positional play is far from him being the finished article. He is still young and is obviously a fast learner, judging from where he was 2 seasons ago.