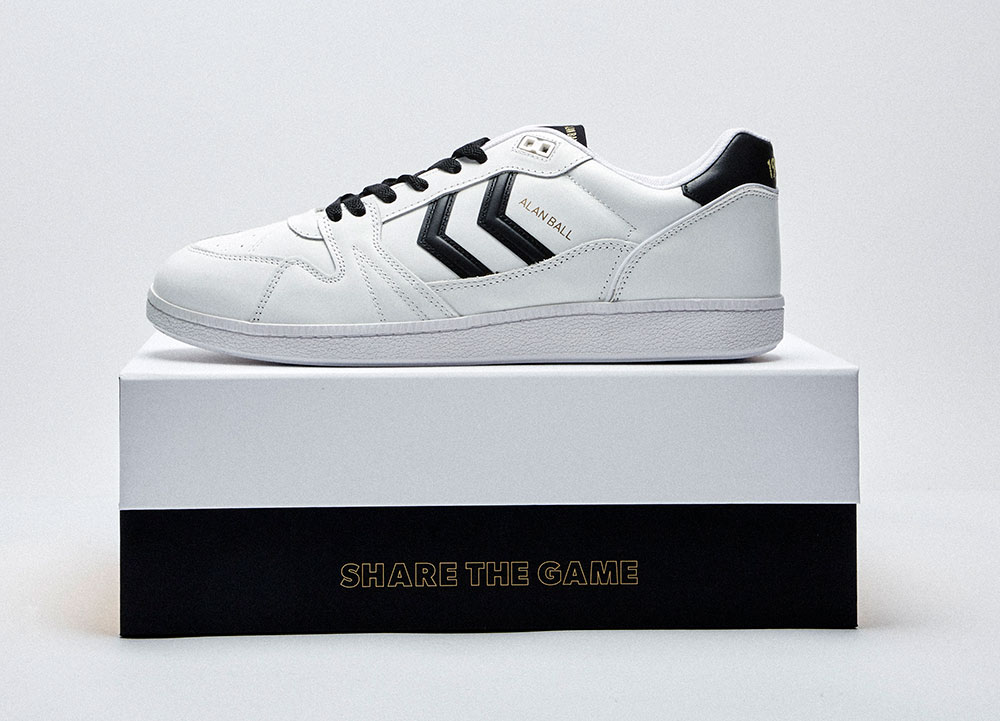 Everton and hummel are to launch a limited-edition Alan Ball trainer to mark 50 years since the Goodison legend wore his iconic white hummel boots.

The trainer will be available online only via evertondirect.com from 8am on Thursday 17 September 2020, with the on-sale time a nod to the former Everton midfielder's number 8 shirt.

The sight of world-cup winner Alan Ball seeming to glide across mud-heap football pitches in his famous white boots is still an iconic image for a generation of football fans.

Ball wore his white and black hummel boots for the first time in 1970, including Everton's 2-1 victory over Chelsea in the Charity Shield at Stamford Bridge on 8 August, 1970.

He became synonymous with the footwear and Evertonians snapped up replica pairs in their thousands.

In a tribute to the famous football boots, the new limited edition hummel Alan Ball trainer is white with the iconic hummel chevrons in anthracite black on the inside and outside edges.

The black tongue label features the Everton legend's name, the Everton crest and the hummel logo in gold, while the back of shoe has the year ‘1970' also in gold, and the insole features a gold Everton crest. It is smartly finished with black laces replicating the original boot. The trainers will be available in adult sizes 6-11.

Alan's son Jimmy says that the Ball family are delighted that their dad still stirs the passion and the memories almost fifty years after he left Everton.

“Even after all this time people still associate white boots with my dad, which we all think is great!” said Jimmy.

“My dad loved Goodison Park and we, as a family, all love getting back there too - he'd be made up at the thought of Evertonians wearing white hummel trainers now.

“Everton was always his Club and he'd be so proud to know that he is still so well thought of by the fans.”

I did everything possible to keep them in good nick but after about 4-6 years they eventually fell apart. I've got an old school photograph of my years football team with me proudly wearing my Alan Ball white Hummel boots!! Absolutely loved the fella.

A lot of kids will like them too and there will be many asking for these for Christmas.

I think the club have been a bit commercial savvy with these.

Stan Schofield
10 Posted 15/09/2020 at 18:38:36
I’m afraid that Alan Ball’s white boots bring bad memories for this old Evertonian. I believe he first wore them in the season after the Mexico World Cup, when his form sank, possibly because he was knackered after the heat and altitude of Mexico, and given his style of play as the ‘midfield dynamo’ playing under those Mexico conditions (he was not alone from that England squad in being affected this way).

Everton sold him to Arsenal in 1971, one of the worst days in football for me as a 17-year-old.

So for me, my greatest memories of Ball are ones where he wears normal black boots until after our league title win in 69-70, not those ridiculous white things.

The original box-to-box player and the best I have seen as a warrior. Tim Cahill in the modern era is the closest who had no fear the opposition.

No self-respecting teenager would be seen dead in these as they won't know who Alan Ball was and the fact that Hummel are not Nike or Adidas.

I bet at least some teenagers would wear them to the match - providing they don't have to pay for them of course.

That was, this was 1970 folks, when the likes of the best midfielder in the country might aspire to buy a newsagents for the rest of his life after his glorious playing career had ended.

Don Alexander
20 Posted 16/09/2020 at 01:18:10
To give younger members an indication of Alan Ball's talent, he had everything Reidy had, and everything Paul Scholes had. "Brilliant" doesn't get close.
Kristian Boyce
21 Posted 16/09/2020 at 04:40:53
I guess I won’t be getting them with my size 13’s. I had a pair of Hummel boots as a kid in the late 80’s, as I thought they looked pretty snazzy. They literally lasted a month before falling apart. My mum was furious and refused to spend anything else on a new pair. The only thing I could afford with my own money was a pair of Gola’s, oh the shame.
Stan Schofield
22 Posted 16/09/2020 at 09:26:31
Don@20: I know the money they got in the 1970s was very small by current player standards, but it was still very big by the standards of the average person. They all had big detached houses in the likes of Formby, fancy cars when most of us travelled by bus, and some (Bally included, I believe) owned race horses.

A point about pitches, some were like mud baths, but Goodison never was. There were the usual bare patches around the goals and centre circle, but it was a great playing surface, good drainage and underpitch heating.

Ball is reported to have painted his old, favoured boots white to look like the Hummel boots to comply with his contract.

I remember when the shite won their blag treble in 2000 and 1 of the magazine’s that you used to get with a Sunday paper had a similarly snappy pair of soles for sale.

If memory serves they were white Reebok with 3 embossed gold stars on the side. 1 for each of their trophies. See what they did there ?

We are not them - thankfully and we never will be.

Nice sentiment blues but let us celebrate ‘the greatest of them all’ on a t-shirt please.

Trainers are sacred, particularly in Liverpool and we are still being crucified for the Lonsdale/Bournemouth incident.

Rob #14, I pity you not having seen Bally in his prime, and the rest of the Holy Trinity

Completely understandable being 50 year's commemorating a legend like Ball and I hope to have something to celebrate in the near future.

I actually like the look of them and they will look fantastic walking around Wembley celebrating some silverware.

The more Hummel sold, the bigger the next contract. In 50 years who's name will we be celebrating?

As long as they're not fake or stolen, Danny, then nothing can or will be done.

While businesses wish to sell online for maximum speed and volume with minimum cost, to all comers (as opposed to say, reserving at least some for the club shop, people with a ticket stub, season ticket holders, members etc), this is exactly what goes down.

Totally shits on the historical link with Alan Ball, Everton and the anniversary; their very selling point. And the fans. Shame.

These are on the hummel website. A bit of modification and you could get your Alan Ball on the side. Personally I'm not a fan of white trainers.