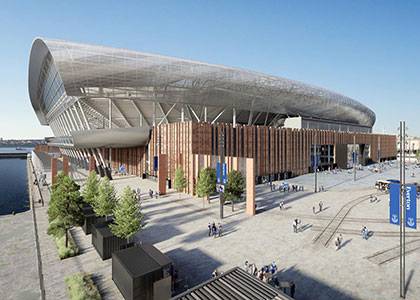 Residents, local businesses, stakeholders and the general public are being invited to share their thoughts on the updated plans released in August and formally submitted to Liverpool City Council earlier this month.

The amendments came after the Blues responded to a number of local authority queries relating to the planning application, as flagged up by statutory consultees. The main changes involve the car park, which will now be placed on the West Quay, with the solar panels originally set for that area moving to the roof of the proposed stadium, which has been slightly lowered.

The full submission and amendments to the plans can be viewed on the Liverpool City Council website here.

Plans will be reviewed by the council before the end of 2020 and, should planning application be granted, the club hope to begin work on the site in early 2021.


Derek Knox
2 Posted 24/09/2020 at 17:44:59
Surely there can be no more 'spanners in the works'!
Alex Kociuba
3 Posted 24/09/2020 at 17:53:30
So, should everything from this point on go to plan, it will have taken 4 years from Everton announcing that Bramley-Moore Dock was their preferred site to start of construction! I wonder what the time scale is to finish construction – has this been estimated yet?
Colin Glassar
4 Posted 24/09/2020 at 18:19:16
Maybe we should build it using Lego. This way if we damage a priceless Victorian brick, or infringe on a nest of protected ants, we can easily up-sticks and rebuild somewhere else!

This is becoming a sick joke.

My money, not much of it mind, would be on the club moving in 2025. There are almost certain to be some unforeseen issues with this particular site, given its location.

And those from English Heritage are trying to prove that they have the public interest in mind by trying to stop plans for the regeneration of an area of Liverpool that is derelict, and while English Heritage have never had any plans to restore this area.

Since this has gone on, I wonder if Fulham in building their new stand and had to extend the wall 9 metres out into the Thames had any problem with the English Heritage?

Well, if he jumps in, that'll be the water removed from the dock in a oner!

The place as it stands, or before we expressed an interest, is a dump, and has been for quite some time. I know from experience because a friend of mine who has since passed, had a boat moored there in the dock while he was refurbishing it. I did a lot of the mechanical and electrical work on the boat – and that was 30 years or so ago!

If English Heritage were that interested in the site, they wouldn't have let it go to rack and almost ruin. Why is it that, now we have not only submitted plans for a total facelift with the new Stadium, but the whole area will receive a boost and also look so different to it's decaying hitherto existence?

Barry Rathbone
13 Posted 24/09/2020 at 19:45:07
I enjoy history and the preservation of architecture so if the complaint relates to the design not being in keeping with the area they have a point.

Not that it will make a jot of difference; the "air con exhaust" will get the go-ahead.

Dan Nulty
14 Posted 24/09/2020 at 19:45:47
Flipping heck, no wonder these new stadiums cost hundreds of millions. Survey Monkey must make a fortune.
Will Mabon
15 Posted 24/09/2020 at 20:07:28
Barry, I'm of the same interest, but to an extent, there have to be new routes taken sometimes. PR and political bull aside (and there's plenty enough of that) sometimes the cost of building a design to modern performance standards (not necessarily quality) that is fully in keeping or a good way towards it, really is technically cost-prohibitive.

The integration of differing, contradictory yet complementary styles is what the truly great architects can achieve. Large structures like the stadium cause less shock and impact on large open sites like the dock, but there's the future to consider too. Many factors.

The world being as crazy as it is now though, if the stadium when built managed to look exactly as if it was erected in the heyday of the docks, there would be accusations of lack of imagination, anti-progressive thinking etc.

What's going on now is just the standard dance that accompanies any similar project today. Hopefully the outcome will be to go ahead – it usually is.

There is a clear and obvious conflict between having a World Heritage Site for the much-vaunted waterfront that includes a series of docks, with the dock walls themselves protected by a Grade II listing, and a developer coming along, filling in the dock, so those listed and protected dock walls are to be totally buried.

If you look at the carefully worded statement they made, the 'out' for the planning committee – and the Secretary of State if it is called in – is already provided:

“Due to the impact of the proposals on a World Heritage Site, which has the highest level of heritage protection and is internationally significant, we regrettably think that this application should be determined by the Secretary of State and will ask for it to be called in for his determination. We have also advised that the application should be refused, unless the decision-maker concludes that the public benefits would outweigh the damage to Bramley-Moore dock and the harm to the World Heritage Site which the proposals would cause.”

I will be surprised if this is not how it plays out, and the 'public benefits' argument that everyone has made wins out – especially after the "Build, Build, Build" call from Boris.

Will Mabon
18 Posted 24/09/2020 at 20:39:59
Here's hoping, Michael.
Stephen Vincent
19 Posted 24/09/2020 at 20:54:48
One of English Heritage's stated aims is 'to bring the story of England to life'. I am wondering how they would propose to do more to bring the site to life than the stadium and surrounding area development. The plans are for the entire dock and include the preservation of buildings above river level.

I agree with Michael that they have to do what their constitution requires but surely as they are an NGO and a registered charity with an income of just over £100m pa a little pragmatism would be in order.

Even if they were to preserve the dock walls, how much of them would be visible and enhance the Liverpool dockland experience.

I do agree moreover the repurposed dock buildings more than suffice in maintaining the historical integrity of the area.

As Michael points out, these people are simply fulfilling a brief and the caveat he quotes will see it through hopefully to kick start a transformation of the entire area.

As Michael points out, English Heritage are being very, very careful to not kill the development altogether.

If you look at this cynically, it smells of a brown envelope to the Secretary of State! Pay the dude / lady off under the table and get 'er done!

Joe Corgan
23 Posted 24/09/2020 at 22:38:02
Jamie #22 - The pace of progress in this country is glacial. I know this site has members from all over the world and I know, first hand, how quickly major infrastructure projects happen in other countries.

Take HS2 Phase 1 for example. Regardless of whether or not it's a good idea, it really shouldn't take 24 years (from inception to completion) to build 100 miles of railway!

As for the question of brown envelopes – I doubt Everton themselves would do anything illegal but I'm sure Mr Moshiri and his team have contacts in positions of power. Always helps to have friends in high places, as they say.

At every turn, these clowns are blocking his efforts. Example: they insist that the dining room oak panelling remains untouched due to it being ‘of historical import!' This, after he has proved that it was constructed in 1952!

Utter tossers to a man/woman.

I had a look at the “MEAS Response Memo". Going by the first paragraph, either someone has made a major blooper or we are in for a pleasant surprise?

Laurie Hartley
27 Posted 25/09/2020 at 04:30:56
Apologies - I just noticed the document is dated 2017.
Alasdair Jones
28 Posted 26/09/2020 at 11:43:36
I have previously commented on the likely process for the determination of the club's planning application and, in so doing, stressed the importance of responding to any opportunity to present support for the proposals.

It seems there is to be further consultation on the modified plans now presented to the Council. I would urge all readers of ToffeeWeb to submit to the Council their continued support for the new stadium so that they and others can be in no doubt that the scheme has the wholehearted support of the club's supporters.

With the risk of call-in by the Secretary of State, as advocated English Heritage, whereby the application is recovered by the Government for their determination (ie, taking the decision out of the Council's hands) public support is vital. Bear in mind if the application is called-in all the documentation that attaches to this application must be presented to the Secretary of State. That includes all statements and documents received by the Council as part of the various rounds of consultation.

Call-in, if English Heritage have their way, would result in a Public Inquiry as I have previously outlined, and set the decision back at least 12 months. However, as Michael Kenrick rightly points out, the decision to call in will have to be taken with care since the Government have to weigh in the balance the risks to them politically of endangering the scheme and the loss of the wider social and economic benefits to the City.

It's a filthy disgrace and the very air stinks.

This is the real heritage of the docks, not the phoney worker's heaven portrayed by these unelected, alien bodies from outside Liverpool.