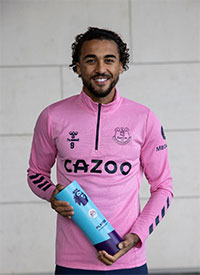 Dominic Calvert-Lewin has been recognised for his scoring exploits last month by being named the Premier League Player of the Month for September.

The Everton star scored the winning goal in the season-opener at Tottenham, grabbed a hat-trick against West Bromwich Albion and was on target again in the away match at Crystal Palace in a 2-1 win.

The 23-year-old added a goal towards October's award with a towering header against Brighton and while they didn't count for the Premier League award, he also notched another hat-trick in the League Cup against West Ham.

Calvert-Lewin was the leading scorer in Europe's top five leagues heading into the international break.

Meanwhile, Carlo Ancelotti was named Premier League Manager of the Month for the Blues' 100% start to the season in September, the first Everton boss to get the accolade since David Moyes seven years ago.

Should it not read “Championship player of the month”?

He's doing brilliantly and we're all thrilled for him and for Everton. He always worked hard. Everything is going right for him and it's well deserved.

But is there a 'revert to type' moment ahead? So we enjoy it while it lasts, and support/stick with him when things dip?

Or do people think this is it? He's emerged, and he's now a top class number 9?

Bill Gienapp
4 Posted 10/10/2020 at 01:36:30
I thought this would be a bigger deal, like a front page headline or something. Also, no mention that Ancelotti also won Manager of the Month.

Ernie (3) - I'd like to think DCL has convinced the skeptics, but when he failed to score during the restart, there were people on here screaming bloody murder about him getting a contract extension and how we "couldn't give him away now."

"Carlo Ancelotti was. the first Everton boss to get the accolade since David Moyes seven years ago."

Tony Everan
6 Posted 10/10/2020 at 10:01:47
Ernie 3, It won’t take long for the snipers to peer over the trenches after one bad result or a couple of missed chances.
Luckily Dominic seems to brush off bad luck, a poor run or spasmodic criticism of. It’s like water off a duck’s back with him.

I think if he continues to stick to the ‘simple game’ that Carlo is instilling in him about the positioning and one touch finishing of Inzaghi, DCL will become consistently good. He needs to keep this philosophy at the forefront of his mind, he has never looked better because of it.

I too was one of his detractors, mainly because of his positional play.
The old Calvert Lewin was rarely in goal scoring positions and for a lad of his size and physique rarely imposed himself on defenders.

He has definitely been coached properly, his positional play has come on ten fold and he is now imposing himself on the game.

Long may it continue and the lad keeps developing.

Manager of the Month – no mention...

Player of the month – no mention.

Of course it's not Klopp related or Liverpool, so no surprise.

Santa Krsh
16 Posted 10/10/2020 at 14:30:18
Congrats Dom & Don.. Feeling a proud blue.
My only worry is about the usual predators who will come sniffing and cause players ( & managers in this case ) to unsettle and this time the unsettling will be coming closer to our Home.
Man City are desparately trying to replace Kun Aguero and United will soon try to replace their Manager!!!
Enjoy while it lasts...COYB

Keith Slinger
17 Posted 10/10/2020 at 15:01:27
Santa @ 16, I do not think Carlo would entertain MAN U as I think he would see Everton as a challenge he has never faced before? As for DCL leaving to any club, I think he is level headed enough to accept that Everton have made him, and to me he will loyal enough to see or extend his contract with us?
Santa Krsh
18 Posted 10/10/2020 at 15:22:47
Hope so Keith..
That's the reason we need to target Top 4 this season and I also seriously hope the club is also thinking on the same lines, in order to keep DCL, Richy, Digne or even Michael Keane (going by the form he is showing) at our club.
People talk about this season as consolidation and all that, but we seriously don't have time.
We got to believe this is our year and it will be our year.
One game at a time.. COYB
Jay Wood
[BRZ]
19 Posted 10/10/2020 at 15:23:29
Lyndon and Michael. I'll post the link here, but this merits a thread of its own.

Allan has given a very fullsome interview on the club site, covering his very humble origins in a Brazilian favela that has shaped the man he is today, to his progression and arrival at Everton.

An outstanding, inspiring and reassuring read.

Dick Brady
20 Posted 10/10/2020 at 15:25:47
So in this week alone DCL became the first Everton striker since Gary Linekar to score at Wembley and now he's the first Everton player EVER to win Premier League Player of the month. Not bad for a Championship player.
Tony Abrahams
21 Posted 10/10/2020 at 15:55:57
Just read that link before you posted Jay, and like yourself, I was very impressed with the very understated Allen.
Keith Slinger
22 Posted 10/10/2020 at 16:06:34
Santa, I agree you with you mate, why stand for second best (ie top 4) when we can dream of going higher, stranger things have happened and we as Everton fans have to believe it can happen?
Tom Bowers
23 Posted 10/10/2020 at 16:08:00
Well, it was a fantastic month for the Blues and us fans so let's savor the moment.
We can only hope that October is even better.
There were obvious a few glitches and we didn't exactly paralize the opposition but one can't argue with victories no matter how they come.

All games are tough in the Premiership and we have a few that are maybe even tougher tests coming up so fingers crossed we have a full squad to call on.

Thanks Jay for posting the article about Allan.
As you say, a good 'un!

Ray Roche
26 Posted 10/10/2020 at 16:38:58
Jeff, I think Dick is referring to the stat mentioned on tv, the first Everton player to score for England at Wembley.
Nick White
27 Posted 10/10/2020 at 16:41:47
Dick - Jagielka and Ferguson at least won it while with us and I’m sure there are others. Lukaku too I think.
Joe McMahon
28 Posted 10/10/2020 at 17:36:25
I only heard about this on ToffeeWeb, I suppose media will headline it, Klopps opinion on September awards!
Ben Howard
29 Posted 10/10/2020 at 18:27:18
I'm a big admirer of Dominic. He has always worked his socks off and sacrificed himself for the team. It's great that our current managerial team have allowed him to be selfish in his play and just look at how it has transformed him. Possessed with all the physical attributes to make a first-class centre forward, its unbelievable to see how quickly top class coaching and tactics can develop a player.
Tony Everan
30 Posted 10/10/2020 at 21:07:30
Jay, thanks for the link on Allan.

We are lucky to have him, a real top class player in a position we were desperate to fill. It cannot be easy uprooting his wife and three kids from Italy, their home, friends and school friends. The sacrifices that the family of a player moving countries and language are significant. It makes me respect him more for coming to us and it shows how much he respects Carlo. Hopefully he can win that elusive title with us.

Dick Brady
31 Posted 11/10/2020 at 07:39:49
I think the report I read said DCL was the first Everton player to win the award since it became the EA Sports Player of the Month in 2016. But yes the likes of Ferguson, Kanchelskis, Lukaku & Jagielka have won previous incarnations.

DCL is the first Everton striker to score for England at Wembley since Gary Lineker though, which is amazing because I would have thought Rooney would have bagged a goal or two before he left for Man Utd.