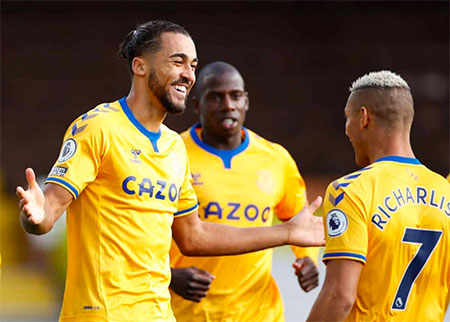 Everton were left clinging on to their first win in four games as a combination of complacency and fatigue were almost their undoing in the second half against Fulham.

Dominic Calvert-Lewin grabbed a brace and Abdoulaye Doucouré netted his first goal for the Toffees as Carlo Ancelotti's men cruised into a 3-1 half-time lead.

However, Fulham came back strongly as the visitors sat back and finished the contest pressing hard for an equaliser after Ruben Loftus-Cheek had made it 3-2 with 20 minutes to go.

Playing with a back three that included Ben Godfrey instead of Mason Holgate who dropped back to the bench, Everton started on the front foot and scored the fastest goal of the Premier League season thus far. Richarlison was back in the line-up after serving a three-game ban and the difference he makes in attack was in evidence from the off as he drove to the byline and cut the ball across goal where it deflected off a defender's leg onto Calvert-Lewin and it bobbled in.

The England striker almost scored a similar goal in the 12th minute as right wing-back Alex Iwobi's dangerous cross came off Ola Aina while a minute later at the other end, Bobby Decordova-Reid scuffed a great chance to bring Fulham level wide of goal.

The Cottagers got their goal just a couple of minutes later as Everton's defensive fallibilities were exposed again and Tom Cairney played Decordova-Reid in behind Yerry Mina and the forward rapped a shot past Pickford to make it 1-1.

Calvert-Lewin had the ball in the net in the 18th minute but it was rightly chalked off for offside and Richarlison forced a good save from Alphonse Areola with a slow shot searching out the bottom corner before a nicely-worked move yielded the Toffees' second goal.

After more good work by Iwobi down the right, James Rodriguez fed the ball wide to Lucas Digne on the opposite flank and his low cross into the six-yard box was turned in by Calvert-Lewin to put Everton back in front just before the half-hour mark.

10 minutes before the break it was 3-1. Sustained pressure from Everton ended with Rodriguez again finding Digne and he sent a lovely dinked cross into the centre where Doucoure arrived unmarked to plant a header past Ariola.

It probably should have been 4-1 shortly before the break but Richarlison mis-kicked a gilt-edged chance in front of goal and James forced the keeper into a parried save in injury time with a rasping left-footer.

The second half was a far less convincing and more sloppy affair from Everton which allowed Scot Parker's men to grow in confidence, particularly after Loftus-Cheek and Aleksander Mitrovic were introduced off the bench. Ivan Cavaleiro tested Jordan Pickford with an awkward shot from 25 yards in the 61st minute but the Portuguese would get the perfect opportunity to pull Fulham back to 3-2 when Godfrey clumsily tripped Loftus-Cheek and gave away a penalty in the 68th minute.

Cavaleiro slipped as he went to strike the ball, however, and kicked the ball off his standing foot and it looped over the crossbar. Another purposeful drive towards the Toffees' uncertain back line ended with Lookman driving inside past Digne and centring hard to Loftus-Cheek whose shot kicked up off Mina and flew past Pickford to make it 3-2.

Ancelotti withdrew the tiring Rodriguez with 15 minutes left in favour of more midfield solidity in the form of Tom Davies and then took off the disconsolate Richarlison for Gylfi Sigurdsson a couple of minutes later and while Fulham huffed and probed for an equaliser, Everton hung on for three important points.