Everton coast past the Owls to progress in the FA Cup 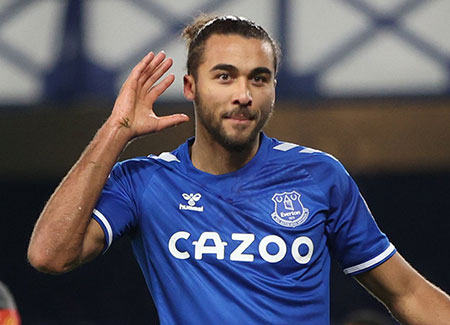 Everton are into the FA Cup Fifth Round for the first time in five seasons following a routine win over Sheffield Wednesday at Goodison Park.

Carlo Ancelotti named a strong line-up that had too much for the Owls and Dominic Calvert-Lewin ended his brief goal drought with his first goal in six games before Richarlison and Yerry Mina completed the scoring in a 3-0 victory.

Calvert-Lewin had missed the previous two matches with a hamstring injury but returned to the lead the line playing off Richarlison to his left and after Adam Reach had forced a parrying save from Robin Olsen at one end with a strong drive, it was the Brazilian who had Everton's first effort on target.

Seamus Coleman swung in a cross from the right flank that Richarlison met with a looping header that Joe Wildsmith tipped over the crossbar in the eighth minute.

Four minutes later, the Toffees thought they had opened the scoring. James Rodriguez slid a perfect pass straight through the visitors' defence that Richarlison collected and tucked inside the post but the goal was chalked off for offside.

Andre Green then tested Olsen with a shot from just inside the penalty area and James had a promising shot blocked before Everton did break the deadlock just before the half-hour mark thanks to a really well-worked move.

It ended with André Gomes out-witting his marker, driving to the byline and fizzing the ball across goal where Calvert-Lewin slid in at the back post to knock it in.

The England striker might have doubled his tally a few minutes later but failed to make contact with Gylfi Sigurdsson's tempting cross and the Icelandic midfielder had a chance of his own but lashed his shot wide.

With such a slender advantage heading into the second half, it was important that Everton didn't take their foot off the pedal in the manner in which they did against Rotherham in the previous round.

Pleasingly for Ancelotti, they remained on the front foot and went close when Ben Godfrey headed wide at the back post, Calvert-Lewin forced a good near-post save from Wildsmith and Abdoulaye Doucouré sliced past the post following a corner.

Two goals in quick succession around the hour mark made the game safe for the Toffees, both served up by the set-piece talents of Rodriguez. First, the Colombian curled a corner onto the head of Richarlison who steered the ball past the keeper in the 59th minute; then, with an almost carbon-copy delivery, James connected with his compatriot Mina who headed home from just outside the six-yard box.

Calvert-Lewin had one more chance off James's dinked ball over the top but his attempt to hook the ball past the keeper was cleared away from the goal line by a defender before the striker made way for Bernard.

Josh Windass, a half-time sub for the visitors, saw one shot from a direct free-kick saved and another blocked by Holgate before Ancelotti made four more changes that included senior debuts for Tyler Onyango and Thierry Small who became Everton's youngest ever player at 16 years and 176 days old.

Apart from a chance for Jonjoe Kenny, himself a second-half introduction for Ben Godfrey, that the defender spooned over after Bernard's shot had been charged down, the last quarter of an hour passed without incident and the Blues saw out the win that ensures a meeting with either Wycombe Wanderers or Tottenham Hotspur back at Goodison on the weekend of 10th February.